Here at Habitat for Humanity, we have teams that work with donors, volunteers, partner families, and our community partners, to help bring our mission to life in the Twin Cities. Guiding us on that mission is our Leadership Staff. 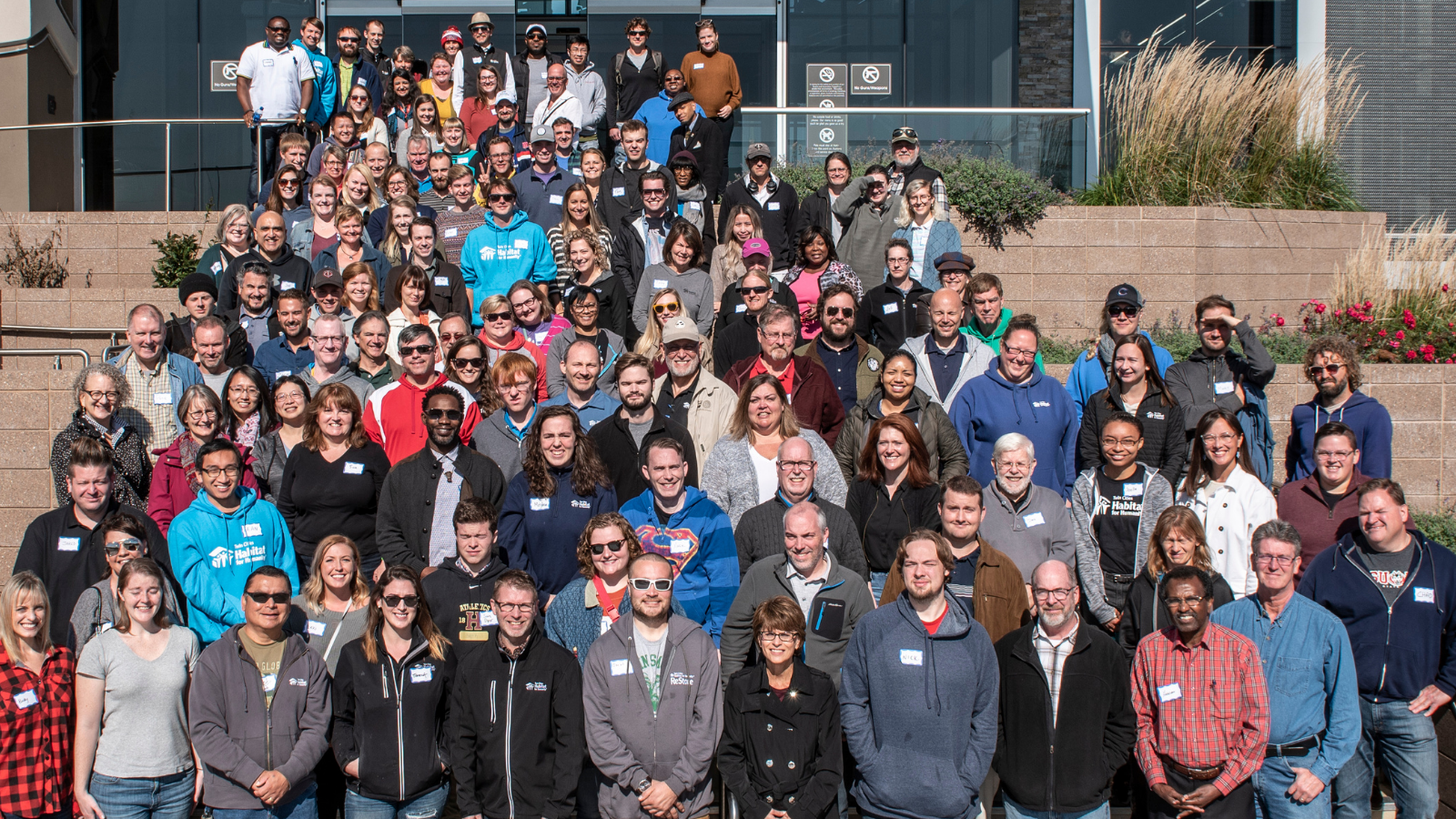 Here at Habitat for Humanity, we have teams that work with donors, volunteers, partner families, and our community partners, to help bring our mission to life in the Twin Cities. Guiding us on that mission is our Leadership Staff.

Chris Coleman joined Twin Cities Habitat after serving as Mayor of St. Paul from 2006 to 2018. As Mayor, Chris was a champion for economic development, education, and racial equity. From 2013 to 2014, Chris was the President of the National League of Cities, a bi-partisan coalition of leaders from across the country. Prior to his election as Mayor, Chris was an investment advisor for RBC and he served for six years on the St. Paul City Council. Chris was born and raised in St. Paul and earned bachelor’s and law degrees from the University of Minnesota. He and his wife, Connie, have two adult children, Molly and Aidan. 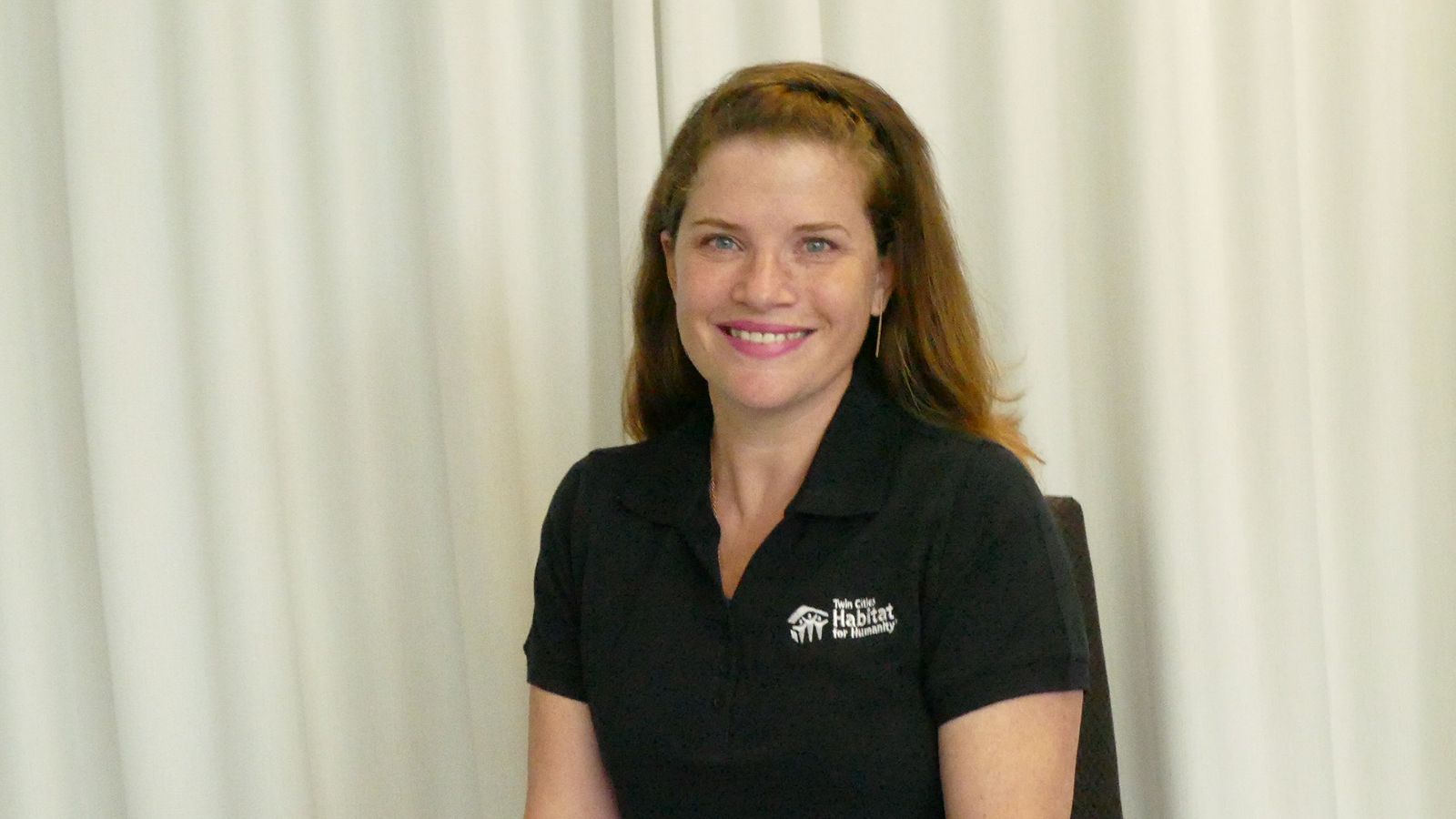 Robyn Bipes-Timm heads Habitat’s affordable mortgage Lending, Human Resources and Facilities, and leads organization-wide strategic priorities and initiatives. She is president of Habitat’s nonprofit subsidiary TCHFH Lending Inc., a Community Development Financial Institution (CDFI). Prior to Habitat, Robyn was at the Greater Minnesota Housing Fund where she led its statewide rental and homeownership lending and programs. She is passionate about affordable housing and bringing equitable access and capital to underrepresented communities. Robyn is active in national housing policy formation and is Board Chair of Minnesota’s Homeownership Center. She holds a BA from Lewis & Clark College, a Master’s in Public Policy from the U of MN Humphrey School of Public Affairs, and her MN mortgage originator and realtor licenses. She lives in Minneapolis with her husband Jeff and new daughter Luci. 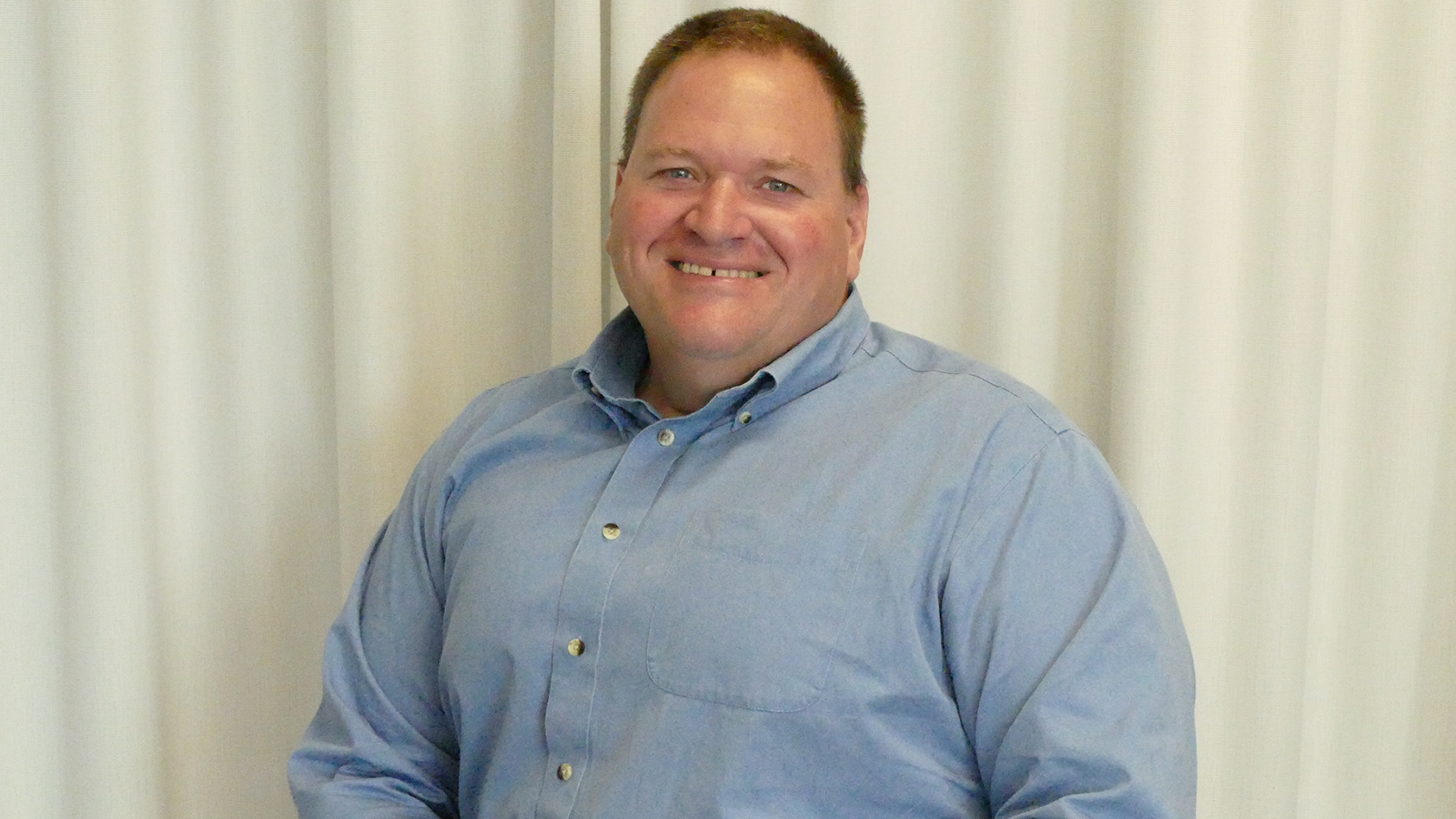 Chad Bouley’s involvement with Twin Cities Habitat for Humanity began in 1996 as a volunteer. With a Bachelor of Science degree in Construction Management Chad became a Project Manager building office, retail, and warehouse and industrial facilities. Chad made the leap to become a staff member at Twin Cities Habitat for Humanity in 2003 to make a difference for those less fortunate. Chad and his wife Lynda spend most of their free time volunteering at their church, girl scouts, and raising their seven young children.

As CFO, Joe Khawaja overseas treasury, accounting, finance, audit, technology, and ReStore Outlets. Joe is experienced in public, private, government, and non-profit sectors rebuilding balance sheets, raising capital, managing growth, financial transformation, corporate restructuring, mergers, and synergies. Prior to Habitat, Joe held financial leadership roles with Federal Reserve Bank, Cargill Inc., and Aramark Corporation. Joe is a frequent speaker at Finance summits and has earned an MBA in Finance from Capella University, Executive Certificates in Leadership from University of Notre Dame, and a B.S. in Accounting from City University of New York. Joe was named a 2020 CFO of the Year by the Minneapolis-St. Paul Business Journal. 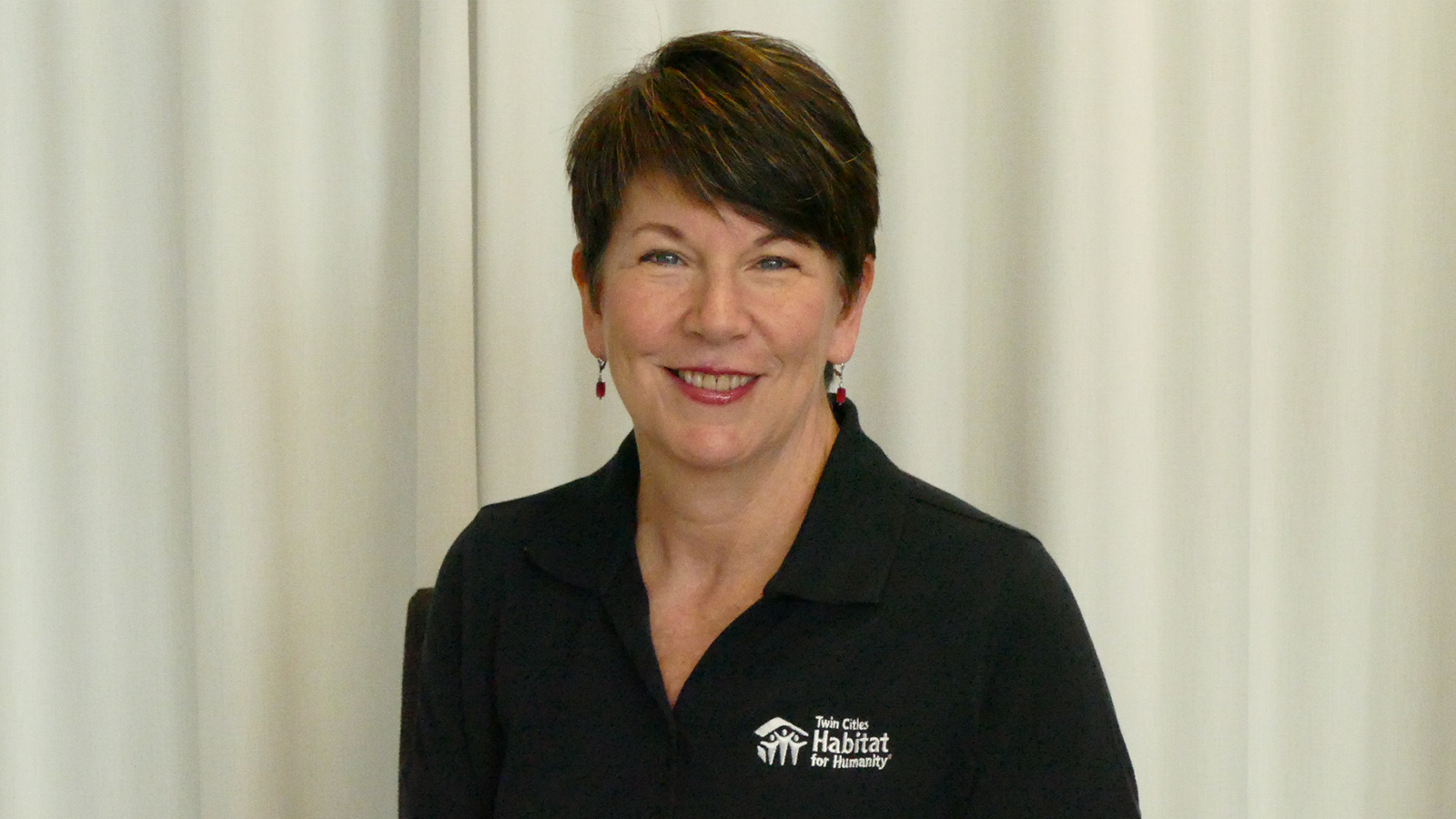 Cathy Lawrence leads Resource Development, which includes fundraising and volunteer programs; Communications and Marketing; and Advocacy. Before joining Habitat, Cathy served as the VP and CDO for Planned Parenthood MN, ND, SD and also served as the Development Director for Twin Cities RISE!. Cathy has a long history in small-business management and consulting, was a staff member for the late U.S. Senator Paul Wellstone, a legislative lobbyist for several business and advocacy groups and has worked on numerous political campaigns.  She has a B.A. degree from the University of Minnesota-Duluth and a law degree from William Mitchell School of Law. 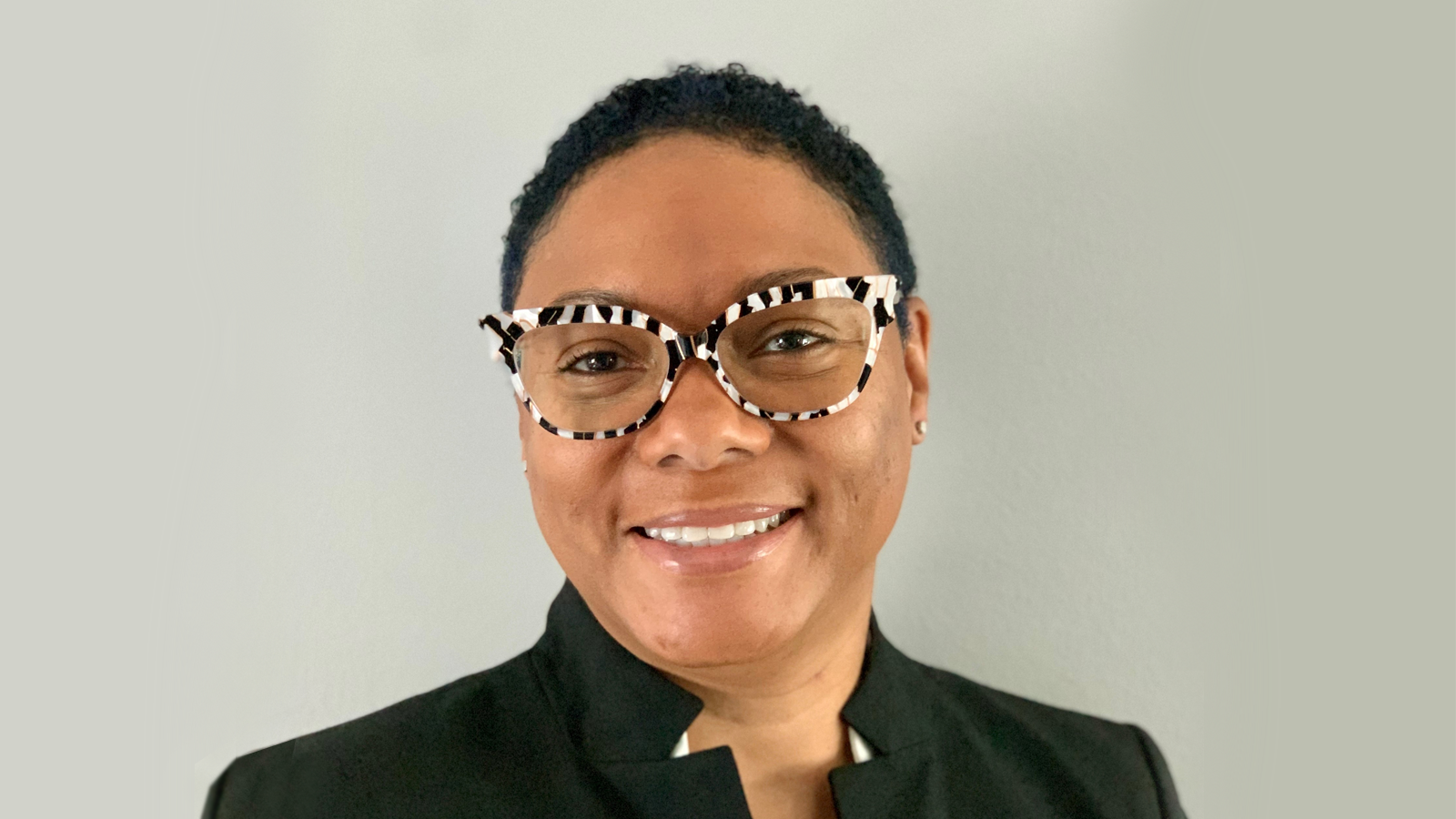 Shereese Turner has led the Programs and Services division since 2018. Before joining Habitat, Shereese was Director of Programs and Operations at Twin Cities R!SE for 11 years. She is an inspiring, passionate leader who builds bridges with community partners and advocates for underrepresented communities. Shereese is a co-founder of the Stop the Violence Bring the Unity Movement and serves on the Haven Housing board. She has a degree in Public/Non-Profit Management from Metropolitan State University and a Master’s in Health and Human Services from St. Mary’s University. Shereese is married with three adult children, two daughters-in-love(law), two granddaughters, her favorite canine Roxy, and resides in Minneapolis. 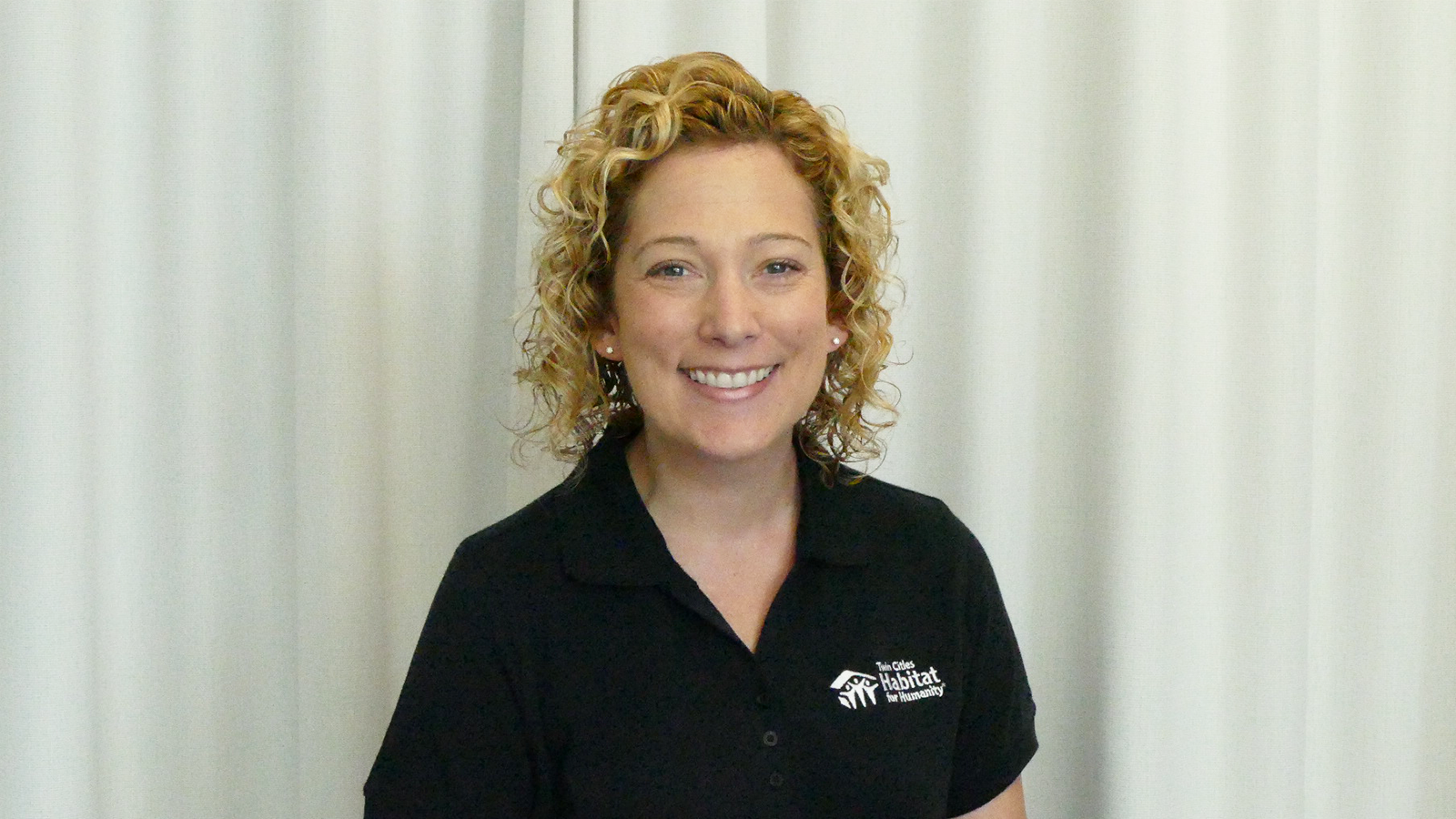 Kate Loe joined Habitat in 2008 and leads the teams responsible for Fundraising and Volunteer Programs. Kate’s team oversees 30,000 volunteer days per year and fundraising activities including corporate, faith-based, and in-kind partnerships, family and foundation grants, and special builds. Kate is also a Global Village Team Leader and has led a group on a Habitat build in Costa Rica. Kate holds a BA in communications from Gustavus Adolphus College and prior to joining Habitat, she spent 8 years managing national client accounts for a market research company. She is a troop leader with the Girl Scouts and serves on the steering committee for Leadership Twin Cities. 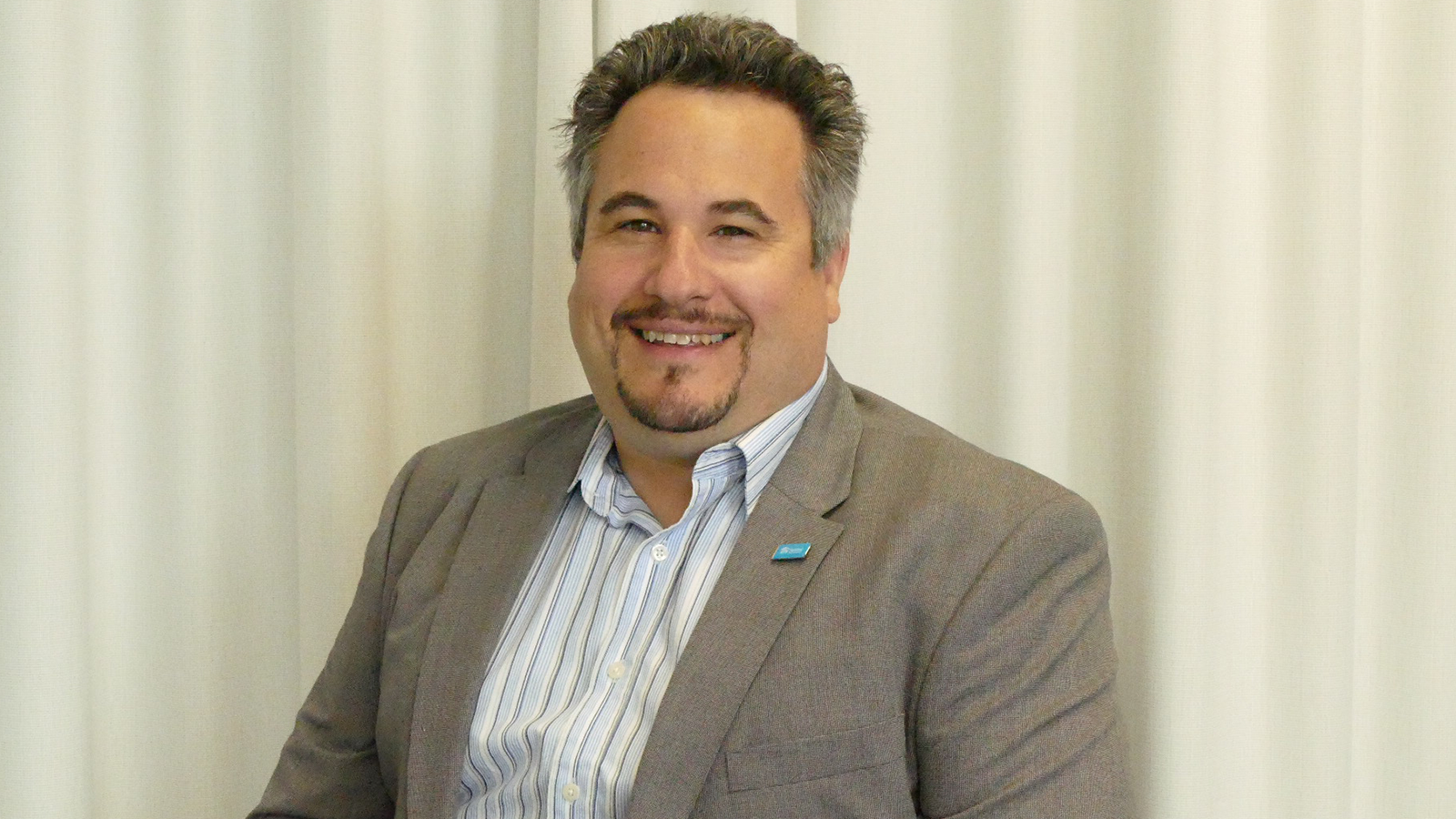 Brian Juntti joined Twin Cities Habitat in 2004, and leads the team responsible for Twin Cities Habitat's marketing, communications and events activities. Before Habitat, Brian was a producer for a Minneapolis-based film and video production company. He is a member of the American Marketing Association and the Minnesota Interactive Marketing Association, and the steering committee for the Minneapolis Regional Chamber of Commerce's Leadership Twin Cities program. Brian has a BA in Theater Arts and Film & Media Studies from Hamline University, and an MBA from the University of St. Thomas's Opus College of Business. Brian lives in Plymouth, Minnesota with his wife and their two daughters. 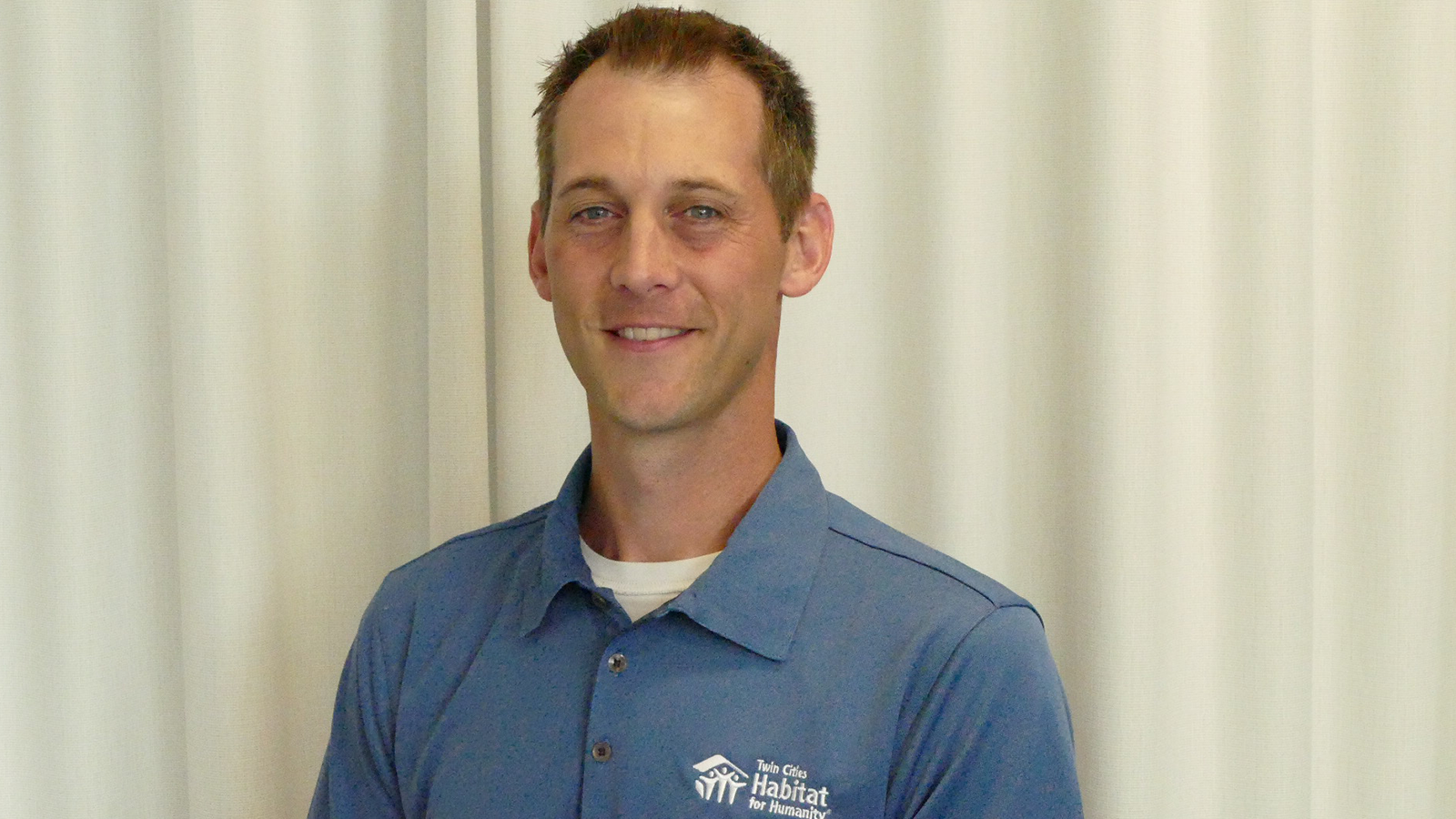 Tim Jacobson joined the Habitat team in fall of 2016 as Director of Human Resources. In this role, Tim heads up the development and execution of the HR strategic plan through the key functions of people, policy, and process. He holds a Masters in Counseling and Psychological Services and is a certified HR professional through the Society for Human Resource Management (SHRM). Prior to joining Habitat, Tim spent 8 years in various HR capacities with Target Corporation and Urban Homeworks. Tim lives in New Brighton with his wife and their two daughters. 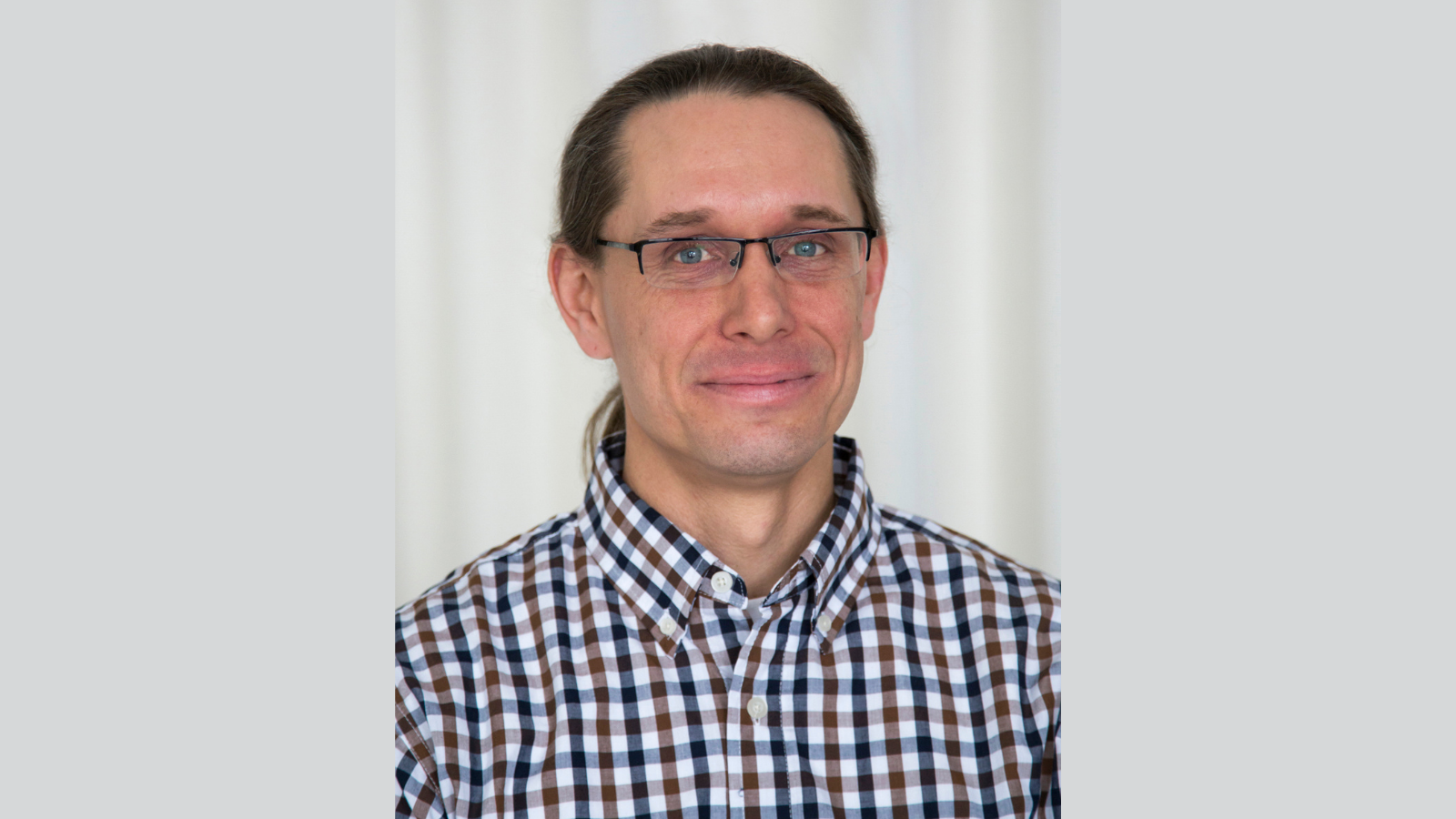 Chad Dipman’s first experience with Habitat was at the tender age of 18 on a college spring break trip to work with the Homestead, FL, Habitat affiliate shortly after Hurricane Hugo. Apparently, that experience touched a nerve, because after two more trips, a year of AmeriCorps, a few years as a site supervisor, and 15 years in Land Development, Chad continues his tenure at Twin Cities Habitat as the Land Development Director. Chad has a BS in Chemistry from Carleton College and a Master’s in Urban and Regional Planning from the University of Iowa and is a certified Housing Development Finance Professional. Chad lives with his wife and 3 kids on their farm in Kerrick, MN. 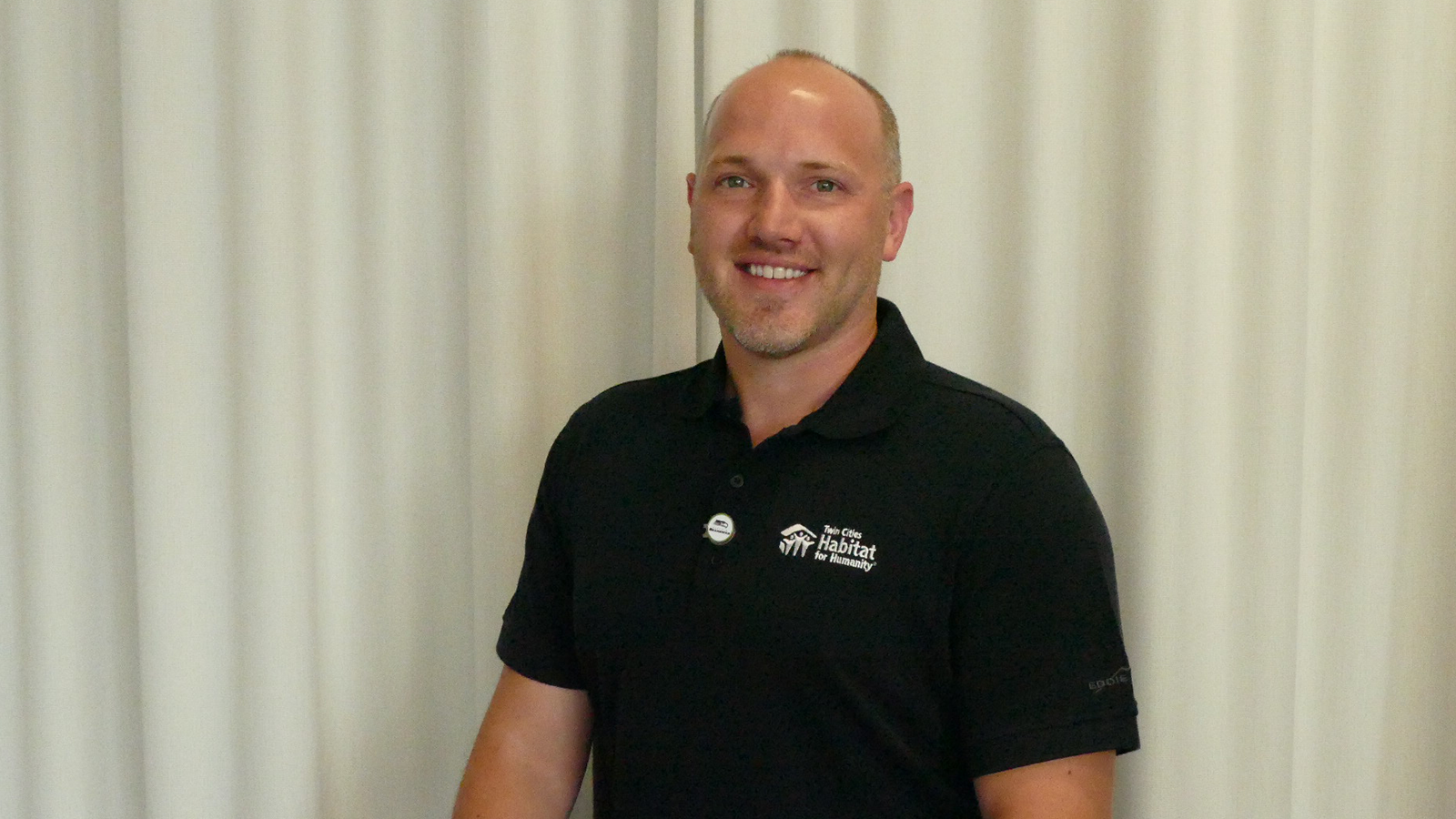 Ryan started with Twin Cities Habitat in September 2016 as the Controller and thoroughly enjoys the challenges in trying to improve on our community’s housing needs and make them work financially. The first few years have flown by for him with all of TCHFH’s programmatic advances and the accompanying financial complexities. He previously worked with two large CPA firms, performing nonprofit audits and other financial engagements throughout the Twin Cities and Southern California. Ryan earned his undergraduate degree in Accounting from Azusa Pacific University and is a licensed CPA. He has three great children that keep him busy, along with partaking in hobbies like soccer, camping, and sending fantasy football emails. Betsy leads the lending team responsible for delivering and servicing an affordable mortgage product, helping to make homeownership possible for many low-and-moderate income families in our community. Prior to joining Habitat in 2013, she worked in the banking industry. Betsy holds a BA in Accounting and Business Administration from Concordia College in Moorhead and her MN Mortgage Originators licensure. She lives in Inver Grove Heights with her husband. 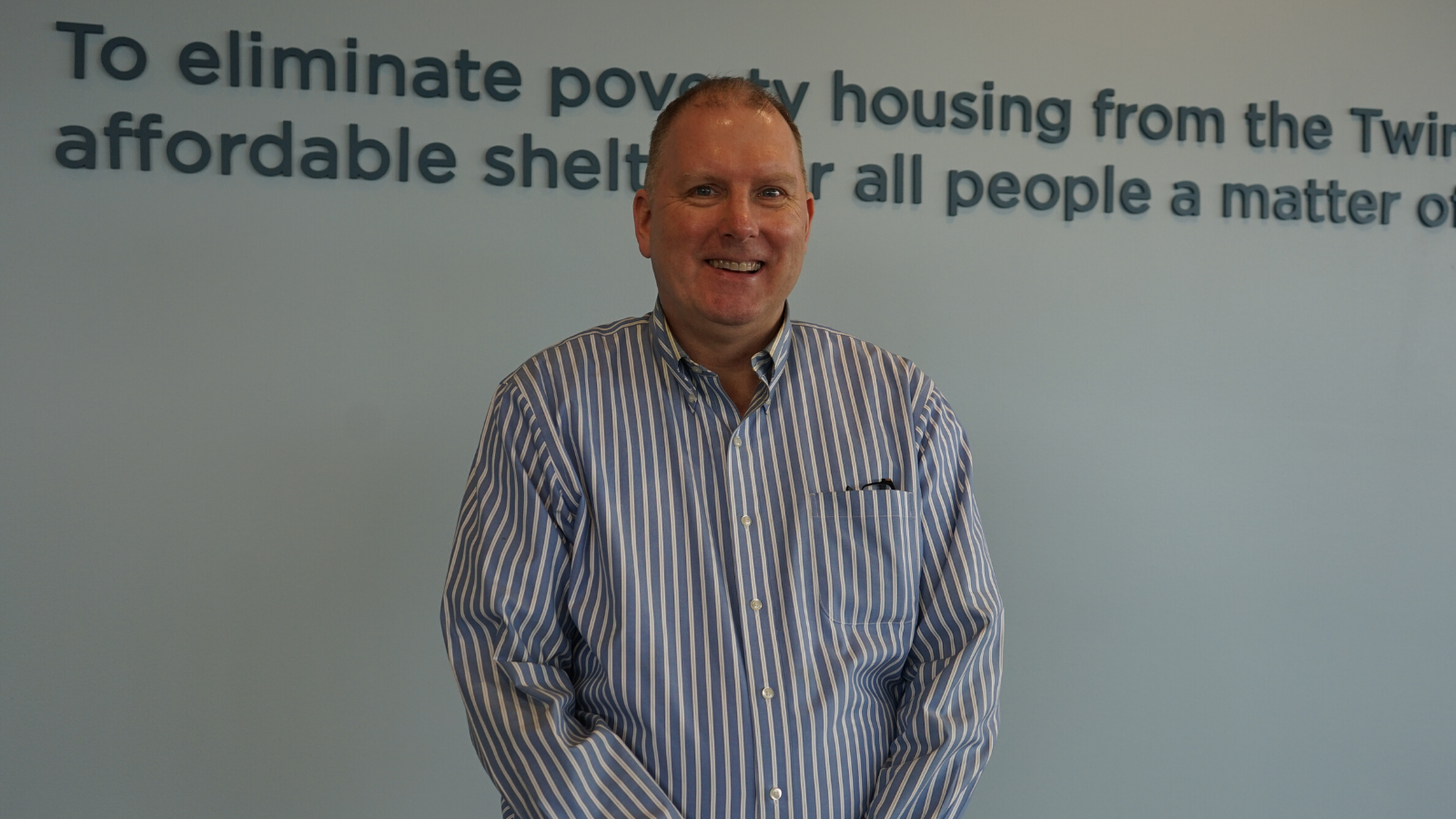 Pete O’Keefe manages the ReStore operation, Habitat’s social enterprise located in New Brighton and Minneapolis. Building materials and furniture, both new and used, are sold to the general public with all revenues supporting TCHFH’s mission. With a lifetime passion for reuse and recycling solutions, Pete previously managed reverse logistics programs for the University of Minnesota campus buildings, Xcel Energy plants in 8 states and Target Stores nationwide. Pete holds a BA in Retail Merchandising from the University of Minnesota and contributes time and expertise to related programs, including ReUSE Minnesota and the Minnesota Pollution Control Administration. Pete enjoys partnering each year with high school and college business programs via retail-minded capstone projects or one-on-one mentorship. 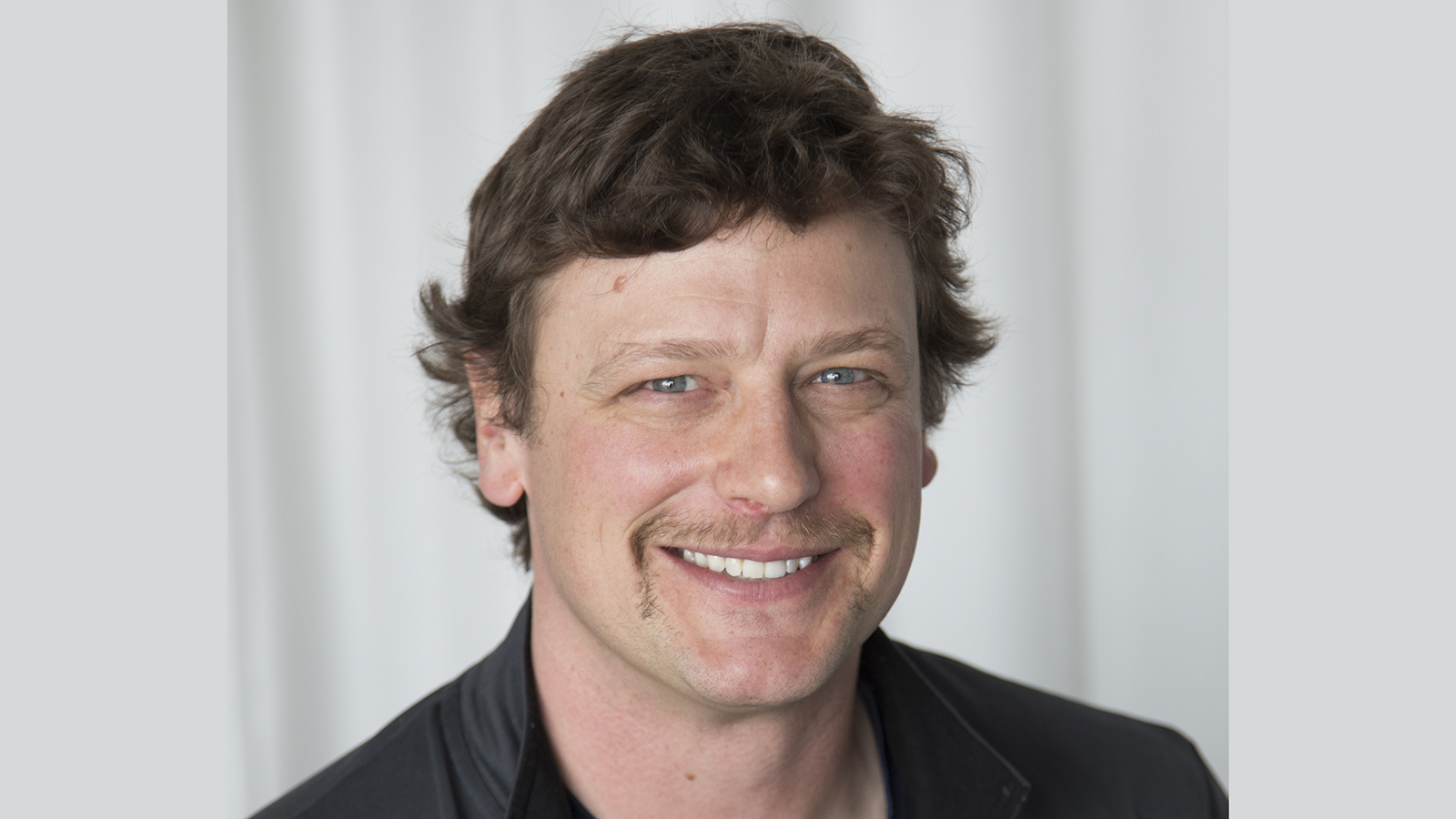 Jake has been working with Twin Cities Habitat for Humanity since 2005 with roles as a Site Supervisor, Senior Site Supervisor, and Construction Field Manager. Previous to working with Twin Cities Habitat, Jake worked as a carpenter and in hardscape landscaping. Jake supervises 20 site staff, 2 warranty employees, the panel plant, and 20 AmeriCorps members in completing the on-site construction process, providing a safe and meaningful build experience for homebuyers and volunteers. 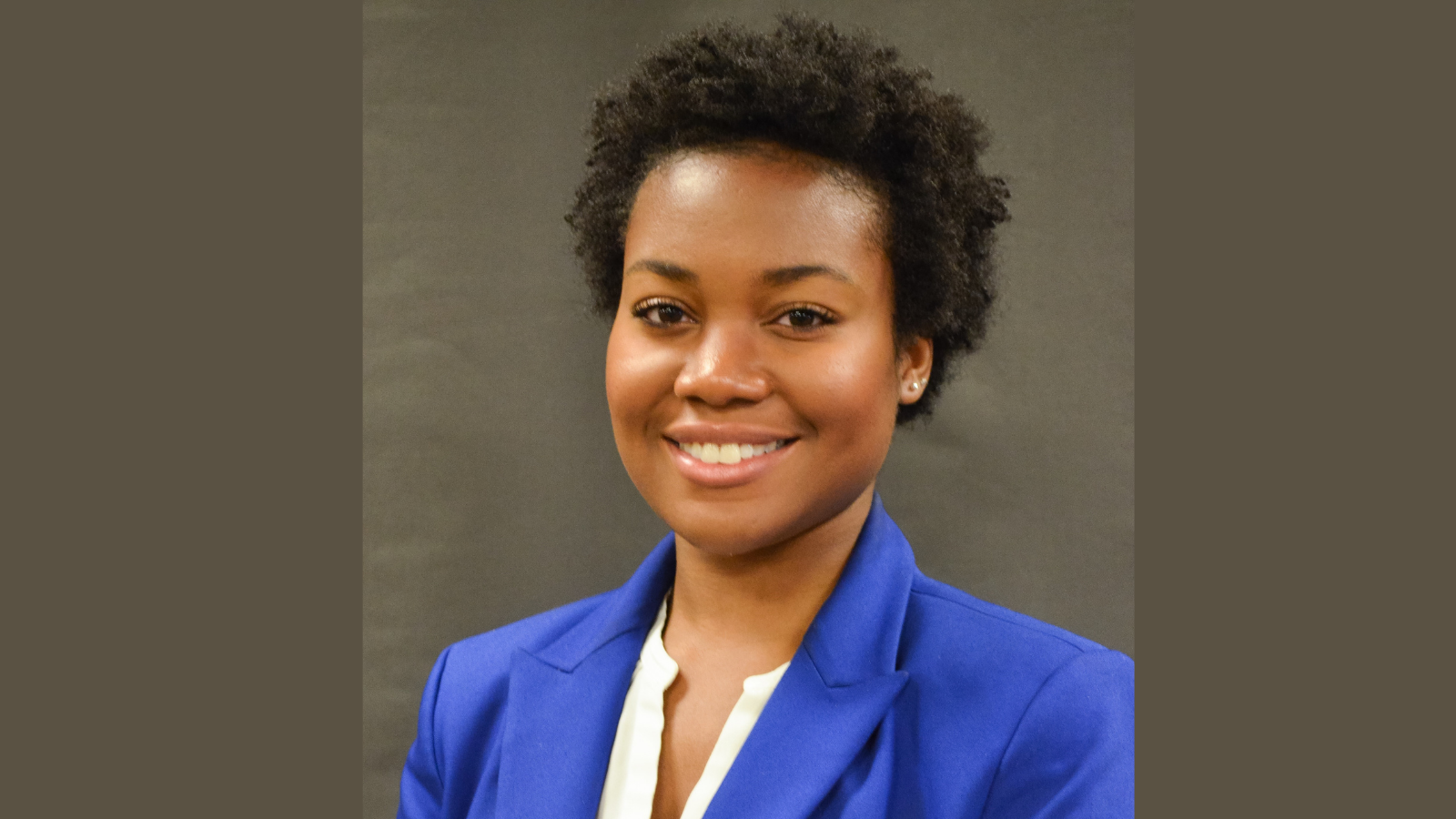 Shoreé joined Twin Cities Habitat as Director of Equity and Inclusion in 2020. Prior to Habitat, Shoreé served the Hennepin County community as District Court’s first-ever Diversity and Outreach Specialist. She began her career with the courts in 2013 in Education and Organization Development and has led community outreach and education initiatives to advance inclusion and ensure access to justice. She uses her strengths as a positive, passionate, and people-centered thinker to lead internal training and development for leaders and employees on topics of diversity, inclusion and providing excellent service.