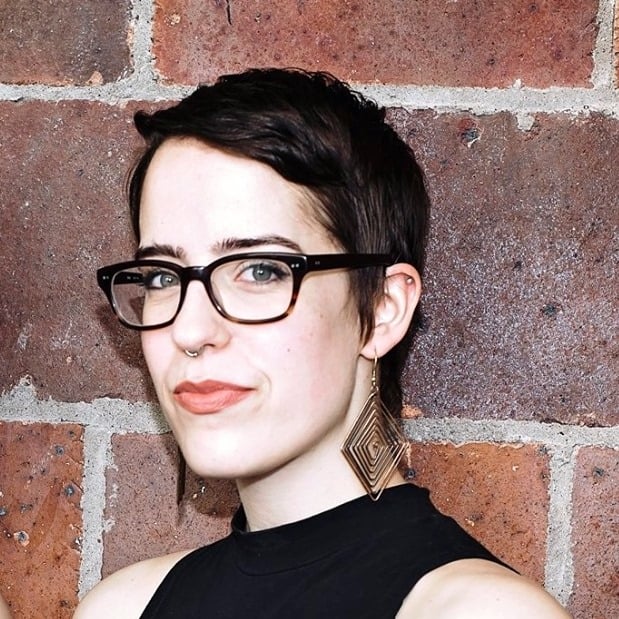 The air is getting crisp, snow is beginning to fall, and loved ones prepare to hunker down for the winter. That must mean ‘tis the season for … local budgeting!

Each December, the cities of Minneapolis and St. Paul adopt their budgets for the subsequent calendar year. This year, of course, both St. Paul and Minneapolis had to reckon with the fiscal challenges of COVID-19. Given local budget shortfalls and uncertainty around aid, policymakers prioritized austerity, balancing it with the need to provide relief to struggling residents and businesses.

Mayor Jacob Frey proposed his 2021 Minneapolis budget in August. His proposal included a hiring freeze, some staff lay-offs, and program restructuring to cut costs. Many departments had to cut their budgets, including the Department of Community Planning & Economic Development, which oversees the City’s housing programs. Minneapolis Homes, a program that Twin Cities Habitat uses to develop new affordable homes, was cut by about 12%. Despite this reduction, the Mayor’s budget offered a silver lining: A $2 million base increase to the program. This means that in future years, a minimum of $2 million will be budgeted from the general fund for Minneapolis Homes. This will help to ensure the stability and predictability of future funding, two things which are greatly needed for affordable homeownership development.

Another department that had to make cuts was the Regulatory Services Department. Their proposed budget included a reduction of 5.3 Fire and Housing Inspection staff positions. Fire and Housing Inspectors proactively inspect rental properties to ensure compliance with City code. In 2019, inspectors reported over 45,000 code violations, including over 8,000 “life safety” violations, which were potentially dangerous to inhabitants. While the cost savings from cutting 5.3 staff is not huge, a staffing reduction would have a big impact on renters, and a disproportionate impact on renters of color.

Together with other affordable housing advocates, Twin Cities Habitat for Humanity took action. We submitted a letter to the City Council, advocating for increased staffing levels in the Regulatory Services Department, and supporting the base budget increases to Minneapolis Homes and other housing programs. 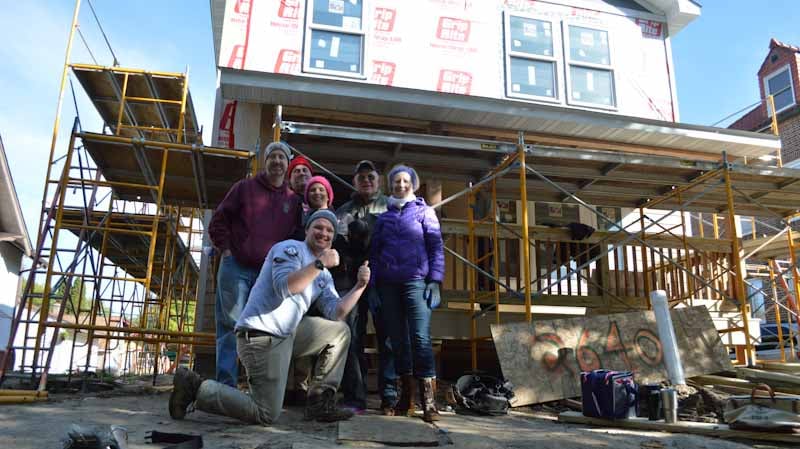 In the final budget, adopted on December 9, the base increases for housing programs remained, but City Council did not fill any Fire and Housing Inspection positions. Nonetheless, the base budget increase for Minneapolis Homes is a small win. This signals the City’s ongoing commitment to funding affordable housing in a consistent and stable way. With this predictability, developers like Twin Cities Habitat for Humanity can count on the City’s continued partnership to expand opportunities for affordable homeownership.

Across the river, Mayor Melvin Carter released his proposed budget in August, which was adopted last Wednesday without any significant amendments. St. Paul was under similar COVID-related pressures, facing a budget shortfall and limited resources. Mayor Carter responded to this by proposing a hiring freeze, as well as increased program efficiencies and reduced program budgets. Luckily, St. Paul was able to avoid laying off staff or using city emergency reserves. But City Departments had to make budget cuts in order to make ends meet. The Department of Planning & Economic Development, which oversees the City’s housing programs, has to hold positions vacant and reduce operating expenses where possible. 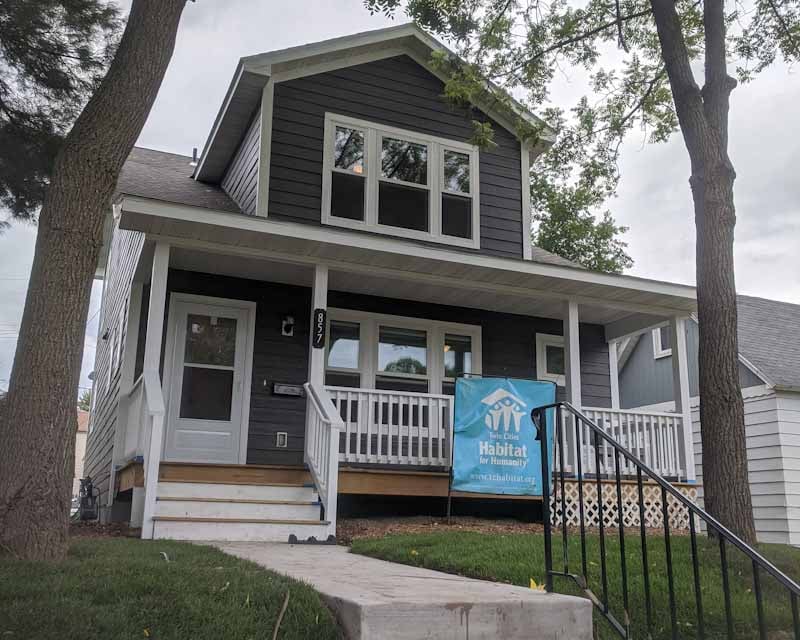 This Habitat home was built with funding from St. Paul’s Inspiring Communities program, which supports the development of single-family homes.

Despite these cuts, a significant investment of $5 million was proposed for St. Paul’s Affordable Housing Trust Fund. This fund supports several key housing programs, including Inspiring Communities, which Twin Cities Habitat accesses to develop affordable homes in St. Paul. We are encouraged to see the funding pipeline for homeownership continue. Even as a COVID-19 vaccine is on the horizon, the economic impacts of the pandemic will be lasting. Now more than ever, we need to invest in homeownership to help more families weather this continuing crisis.

As we look ahead to the new year, our work in St. Paul will continue to be grounded in relationships. Indeed, with a new Director of Planning & Economic Development and continued leadership by City Council, the Mayor, and housing staff, we will advocate for a cohesive and powerful approach to advancing affordable homeownership. 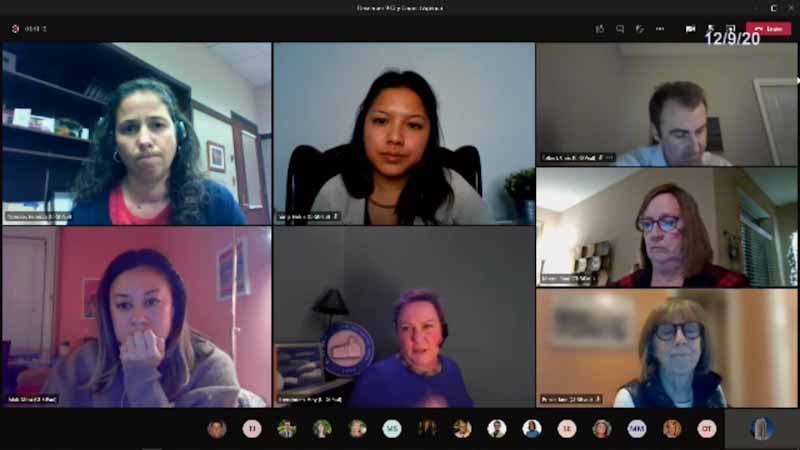 Like many of us during this turbulent year, the St. Paul City Council currently conducts business virtually. Here's what the December 2020 Council meeting looked like.

A Note About Public Safety

If you’ve read local news in the past month, you may have seen an article or two about public safety. After the police killing of George Floyd in May, police accountability and funding rose to the top of budgeting discussions. In Minneapolis, hundreds of residents testified at three budget hearings, commenting about public safety into the early hours of the night. St. Paul, too, heard its share of comments regarding public safety and the direction of city funds.

At Twin Cities Habitat, we know that housing is critical for the safety of communities. We are working hard every day to bring people together to create, preserve, and promote affordable homeownership and advance racial equity in housing. Will you join us?

Sign up for Advocacy Action Alerts. You'll receive email alerts about small actions you can take to support housing. 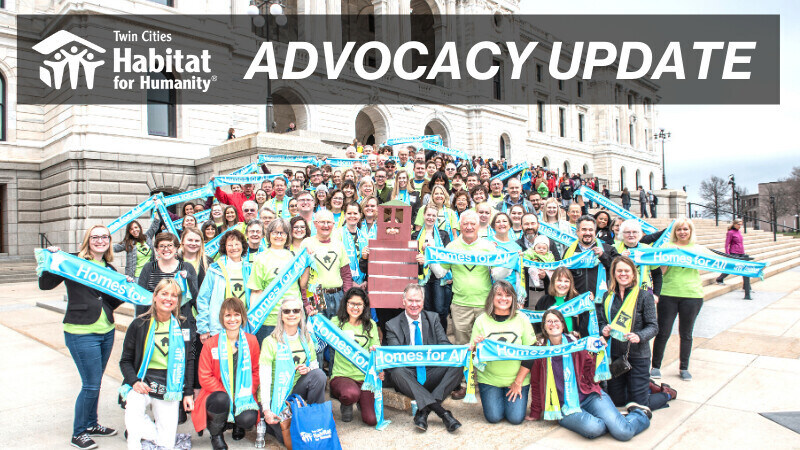 It is everyone’s favorite time of year, the start of new local budgets! This past December both...