Six years ago, Great River Energy started a new policy to encourage employees to give back to the community. That first year they decided there was no better place for them to direct their volunteer hours than building houses with Twin Cities Habitat for Humanity. David Kemp, the Manager of Transmission Planning for Great River, has worked on a Habitat house every year since. “As an engineer I like construction. Most of us do.” 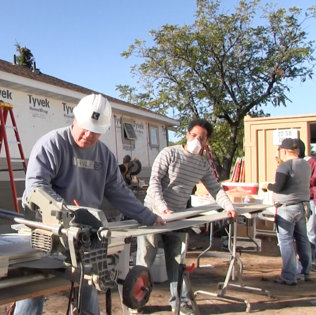 The day I visited the site there were 10 volunteers from three different groups at Great River. All but one of them  had worked on Habitat builds before. Molly, the rookie, was new to Great River but, Kemp said, the moment she’d heard about the Habitat build, she signed up. Company volunteers were on their second week of a two-week commitment with Habitat and they were making quick work of installing the siding. There was a lot of good-natured ribbing going on, but despite how fast the jibes were flying, the hammers and saws were even faster, all of it under the watchful eyes of Site Supervisor Eric Weatherman.

No one on the crew had ever sided a house before, Weatherman patiently showed them the right way to get the task done. Like so many Habitat Site Supervisors, Eric is a master of keeping 10 balls in the air at a time with one hand. With the help of an AmeriCorps member, Eric  simultaneously teaches the amateur builders how to do each task while still monitoring experienced volunteers.

If this day’s crew is any indication, the other volunteers from other build days are equally good at showing why their company is aptly named – Great Energy!