Shortly after we transitioned from Siem Reap to Battambang, I received a phone call from the hotel’s front desk informing me that my roommate was on his way up to join me.  I knew I would likely have a roommate, but I was taken aback when I opened the door to see who it was.  Wow! I certainly wasn’t expecting to see an 87 year old man with fire in his belly and fresh as when he left Minnesota. I quickly learned he had just completed his first trip outside N. America and very non-challantly described his solo journey from MSP to SFO, then on to China, next to Vietnam, and finally Siem Reap. Unbelievable. I’ve traveled quite a bit to many different countries, but I can’t imagine starting out on an itinerary like this – SOLO! 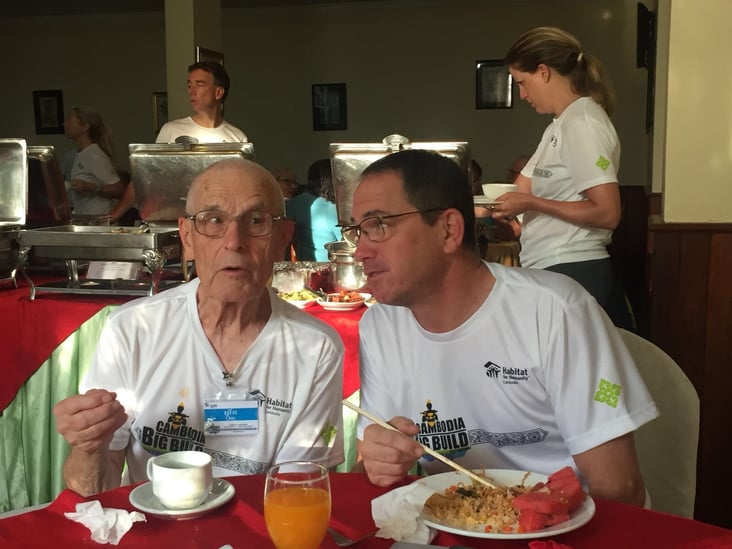 Well, it took about five minutes for Orin and I to become best buddies. His attitude and energy are completely infectious. He has become the rock star of not only our team from the Twin Cities, but the entire group.  Everyone knows Orin. We are so incredibly blessed to have him on our team. I am especially blessed because I have him as a roommate and a crew member. The only downside for Lee and me is that we can’t ever let our guard down and slow up or occasionally whine about one thing or another. How could we with Orin on our crew?

Orin is a celebrity in many ways, not the least of which is his status as the founding director of our Habitat affiliate. Having run one marathon in my 40’s, I think he is also amazing because he has run literally dozen of marathons! His first was when he was 68 and his last was only two years ago. That’s so inspirational.

Orin and I shared some great moments together.  He has truly inspired me.  His energy, enthusiasm, fitness (both mental and physical), and infinite positive outlook on life have been one of the best parts of this trip.  It is second only to the reason we all came here – to serve the families who will soon take position of a new home build with all of our TLC (and LOTS and LOTS of sweat!).  I strongly suspect everyone on our team feels the same.  In fact, we renamed our team from Twin Cities Habitat to TEAM ORIN.  Once we are back to the US, you will find our photos on Instagram at #teamorin.

Learn about our upcoming trips in 2018 to the Dominican Republic and Nicaragua.