This week, Twin Cities Habitat for Humanity dedicated the 2014 Wayne Atkins Entrepreneurs House on 60th Avenue in Crystal. While each Habitat home dedication is special, this event had tremendous significance for both the homebuying family and the sponsoring group—Entrepreneurs House. 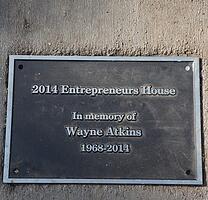 Wayne Atkins was a co-founder of Entrepreneurs House (E-House), a community service project for the Twin Cities entrepreneurial community. In March 2014, Wayne passed away after a long battle with cancer. This home has been dedicated in Wayne’s memory and in honor of the legacy he left through E-House.

More than 60 people gathered inside the home to celebrate the accomplishments of the homebuyers—Siralkhtim Ahmed and Abeer Mohammednor—and to recognize Wayne’s compassion, spirit, and enthusiasm.

The homebuyers shared that they had been applying on and off to Habitat’s homeownership program for more than 10 years and were extremely thankful to have an opportunity to stop moving from house to house and, at last, have a home of their own. Eric Weatherman, the home’s site supervisor, thanked the homebuyers for their hard work and praised Wayne for his commitment to and deep understanding of Habitat’s mission. Eric especially acknowledged Wayne's willingness to recruit others saying, "Hundreds of people work [with Habitat] just because Wayne asked.”

Wayne’s parents traveled from London to help dedicate the home and recognize their son’s contributions. His father, Colin Atkins, is extremely proud of his son’s many achievements and noted that the E-House project was particularly close to Wayne’s heart. He was delighted to welcome Siralkhtim and Abeer into the home after their long journey to homeownership. 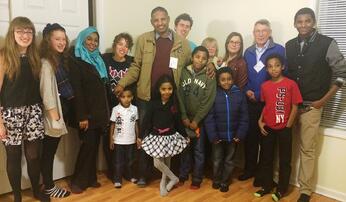 Stephani Atkins, Wayne’s wife, shared that she and Wayne had worked with Habitat for more than half of their marriage and that a lot of heart, soul, enthusiasm, and goodwill went into this house. Stephani thanked the homebuyers for allowing her family to be a part of their lives through E-House and shared with them something she has learned in her own house: “A home is a living scrapbook of what goes on it your life and is a place to cherish your memories.”

The current chair of the Entrepreneurs House Steering Committee, Mik Gusenius, described Wayne as a mentor and visionary. Wayne and his co-founder, John Bergstrom, recognized that “if you get enough small companies together, you can build a house.” Mik also shared that Wayne often paralleled entrepreneurs and homebuyers—their work takes time, commitment, money, effort, heart and vision. Clarke Porter, a member of the Steering Committee echoed Mik’s kind words and added that this year E-House gathered more than 40 companies and provided 600 volunteer days. 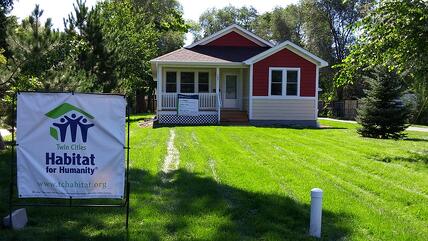 John Bergstrom, who has worked with Habitat for 25 years, praised the organization for its growth and commitment to such a worthy mission. He presented the family with a framed Golden Rule, a symbol of Habitat’s inclusive nature and core value of faith in action.

Finally, Sue Haigh, President & CEO of TCHFH, spoke about Wayne, E-House, and the homebuyers. “I don’t know anybody who had more joy in giving than Wayne had,” she explained, acknowledging that everyone gather at the dedication “is a part of this gift of God’s love.” Sue expressed her excitement for the future of the family’s beautiful children in this beautiful house and congratulated them for reaching this milestone in their lives.