Day One of our week in San Juan de la Maguana:

We were greeted at the hotel by our local Habitat coordinator, Nongelys, and our engineer (aka site sup) Roberto. We managed to pack all 18 of our Twin Cities Habitat for Humanity crew into two not-very-large vans for a half-hour ride to an outdoor factory where we'd be making concrete slabs for future houses. It was certainly a new construction technique for most of us ,but after a short training period we got the hang of it. 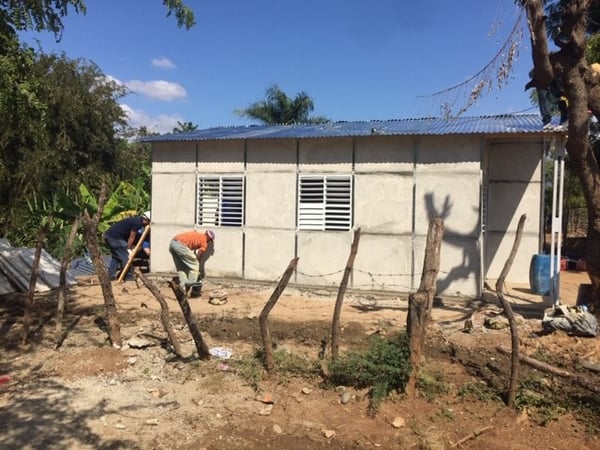 Concrete is mixed and poured into metal forms divided into big squares about 3'x3' and  1-1/2 inch thick. Once cured, these squares will be slid into aluminum channels to hold the walls together. But the panels we made today will take four weeks to cure, so another crew will be using them for their houses later this year.

The work was dusty (shoveling sand and gravel); wet (lots of concrete splashed on bodies and faces); and tiring, but once we got in the groove we became surprisingly productive. The local Habitat crew was patient with these newcomers from Minnesota, and the work ended without any serious mishaps. 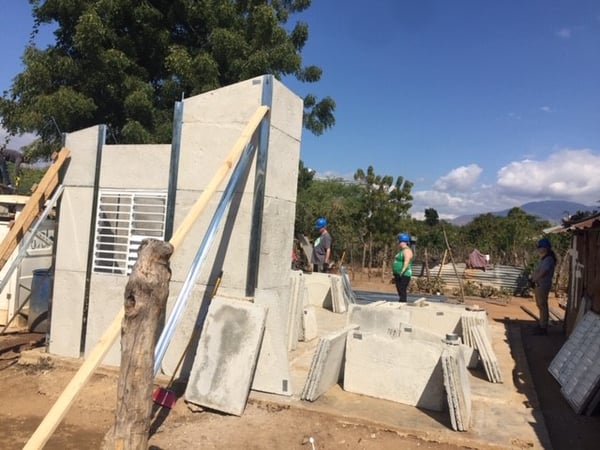 Tomorrow we'll be using panels made previously by others as we start to assemble a house. They weigh over 150 lb each so it'll be interesting to see if we can learn to hoist them up into position without smashed fingers or toes. Check back tomorrow to see how that all turns out!

Where we are staying in San Juan is in the far western part of the Dominican Republic (DR), very close to the mountains and the Haitian border.

Driving in the DR is, to say the least, an interesting experience for anyone who is accustomed to stop signs, designated parking lanes and some sense of order. Motorbikes are everywhere, and venturing out into the street as a pedestrian requires serious concentration. Just before dinner, Nongelys and a local guide navigated us to a few of the local sights including their city hall and the impressive university complex. Quite a contrast to the rural areas with the animals roaming freely among scattered homes and work places.