Kaia strapped her young son into his baby seat on her bike and headed out for a leisurely ride. It was a beautiful day in the Phillips neighborhood of Minneapolis in 1987. As they were riding, they saw an awesome sight: a house on wheels! It was an old, large duplex on a truck, slowly making its way down the street. They thought it was pretty awesome.

“I remember this distinctly—but I never dreamed that’s where I’d end up living!” Kaia says.

Kaia’s story, like everyone's story, is unique—and in hindsight, she can see that all the seemingly random twists and turns led her to exactly where she is today: celebrating 30 years in a home she loves, and 30 years at a career that fits. 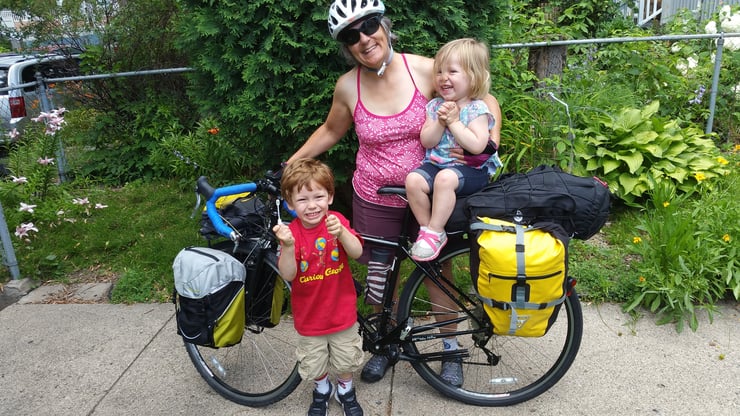 Kaia with grandchildren Eli & Ava as she rides out from their shared home to Victoria to join in the 2017 Habitat 500 fundraising ride.

The house on wheels

Kaia grew up primarily in the Twin Cities, with periods in Iowa and even a year of high school in Norway. She earned a degree in Norwegian from Augsburg College in Minneapolis and spent a year teaching English in Guatemala after she graduated. But she always felt drawn back to Minneapolis.

In 1987, Kaia and her husband at the time were living in a one-bedroom apartment in Minneapolis with their young son. Her husband had difficulty with stable employment, and Kaia was working part time with the Phillips Neighborhood Housing Trust, helping families get connected with housing.

The Twin Cities Chapter of Habitat for Humanity was only two years old at that point. When Kaia saw a Habitat yard sign in front of a rehab project near her neighborhood, she decided to volunteer. It was there that she realized her family fit within Habitat’s guidelines. And at the time, Habitat was seeking smaller families, like Kaia’s, for experimental cooperative housing. That’s where the house on wheels comes in.

Two old duplexes had been donated to Twin Cities Habitat, but had to be transported to new land. They were smaller than the typical Habitat home, but perfect for Kaia’s family. She started her sweat equity volunteer work, updating the home to current standards. During this time, Kaia found out she was pregnant with her second child. She also took a part-time job at the Norwegian Lutheran Church in Minneapolis, mere blocks from her new home.

The family bought the home and moved in. It was a great fit at the time. But the next few years came with challenges that had her wondering if she’d be able to stay there. Kaia’s husband left. She became pregnant with her third child. And while she loved her house, she had some safety concerns about raising her kids in her neighborhood. 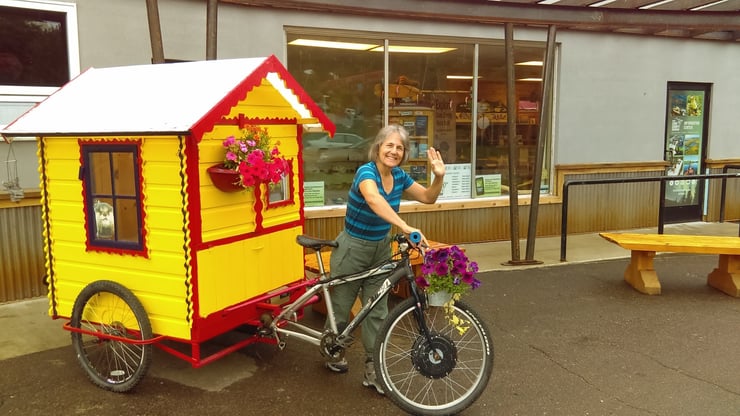 Kaia and a special "house" bike.

On top of Kaia’s other challenges, Habitat’s cooperative housing experiment ran into complications, and two of the four families left the agreement. So, in 1992, Habitat decided that the best course of action would be to relocate the two remaining families. For Kaia, it was a blessing in disguise.

She was given an option and chose an old home in the Kingfield neighborhood of Minneapolis that would be renovated. It would have enough space for her and the three kids. She did some sweat equity volunteering on this house, too, and discovered that some of her new neighbors were volunteering alongside her.

She remembers learning how to patch cracks in the plaster of the old home. “That’s something I took note of, and a skill I’ve used again and again,” she says with a chuckle. Soon she bought the house, and quickly felt at home.

“Just after we moved in it was National Night Out,” Kaia remembers. “They blocked off our street and had a picnic. I felt like it was a very joyous welcome. Our neighbors were very welcoming, and that made an impact on me. I felt like I belonged there.” It was one of her son’s birthdays that night, too. He loved it.

Kaia’s three kids had room to play and have friends over. They got a dog because they now had a fenced-in yard of their own. Kaia grew a garden like her mom had grown in their suburban home.

As time went by, Kaia’s home evolved with her. “I became an empty-nester after my last child moved out, and I could barely stand it!” Kaia remembers. “I thought this isn’t right, to have this house with empty bedrooms. So I started taking in people.”

Kaia did Couch Surfing for a while, letting people stay in her home. “I met so many cool people.” Then she took in a grad student who couldn’t contribute financially, but “she could help with the garden and had a dog.”

Later, Kaia’s second son was in a situation similar to Kaia’s before she found Habitat. He and his wife were in a one-bedroom apartment with a young baby and another on the way. In their search for a new home, they weren’t finding affordable places close enough to work. So Kaia suggested they move in with her. 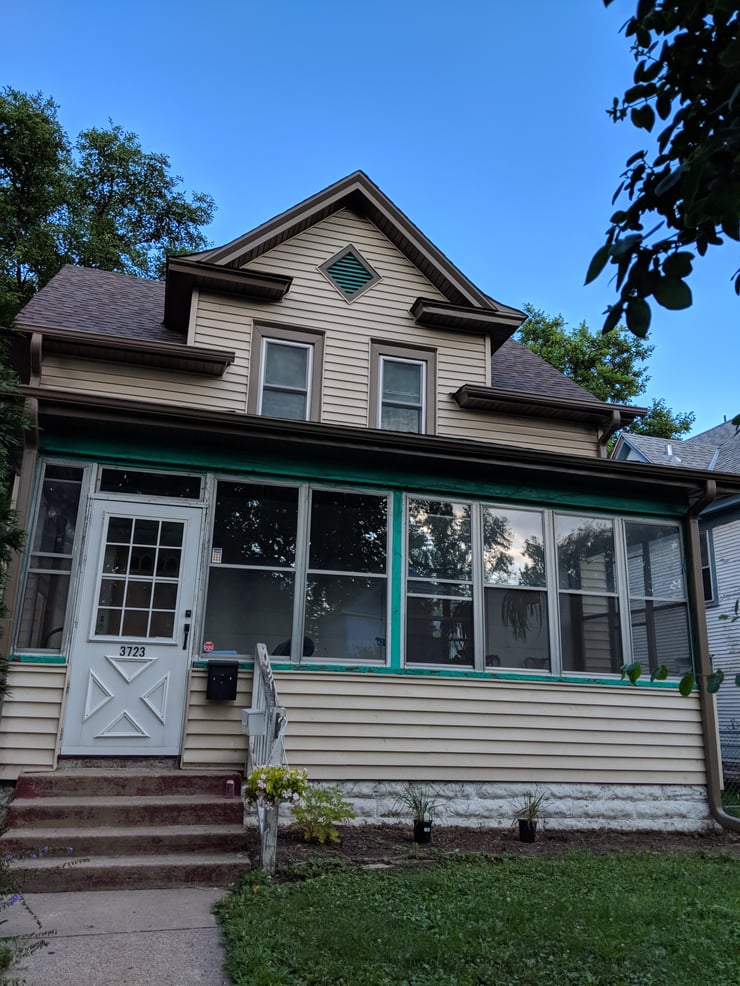 Kaia’s year in Guatemala after college had opened her eyes to a more communal way of living. She saw families sharing homes across generations—every space in a home being used well. Now she’s able to live this way with her own family. It’s been 3 ½ years since her son’s family moved in with her. They’ve added a swing set to the backyard, brought in their own furniture and dishes, repainted rooms. It’s truly a shared home.

“This house is starting to roll over to the next generation, and I couldn’t be happier,” Kaia shares. “Just because I was the one who originally did the Habitat paperwork, the whole time I felt like this was our family house. It wasn’t about me. We’re all in it together, and we’ve all benefitted.”

It wasn’t just Kaia’s family who benefited from her Habitat home. Kaia still works at the Norwegian Lutheran Church—the job she started when she applied for Habitat 30 years ago. Her affordable Habitat mortgage payment allowed her to keep working part-time for a church she loves, even when the church was facing financial difficulties.

Now, the church is thriving. They have Norwegian language classes and cultural programming during the week. When it came time to celebrate Kaia’s 30-year work anniversary and people wanted to send her gifts, she requested that any gifts go to Twin Cities Habitat (they sent almost $1,000). She wants her church to understand that the stability she gained from Habitat allowed her to stay with the church through tough times and help bring it into a brighter future.

Kaia has always loved to bike. She saw her first Habitat home – the “house on wheels” – from her bike 30 years ago. And recently, Kaia has used her bike to build more Habitat homes. In 2013 and 2017, Kaia raised thousands of dollars for Habitat affiliates while biking 500 miles through Minnesota in the Habitat 500. And she’s itching to do it again.

Before Habitat, Kaia was living month-to-month. Once she bought her Habitat home, she could focus on her career, her kids’ futures, and her community. Her story shows the ripple effects that an affordable, stable home can have—for neighborhoods, workplaces, and future generations.

“Thank you for the difference you make in people’s lives,” Kaia says to all Habitat supporters. She invites you to imagine that, right now, another family is buying a Habitat home—and in 30 years, they’ll also pass their home on to the next generation, they’ll be able to retire, and they’ll have accomplished things that might not have been possible without their Habitat home. 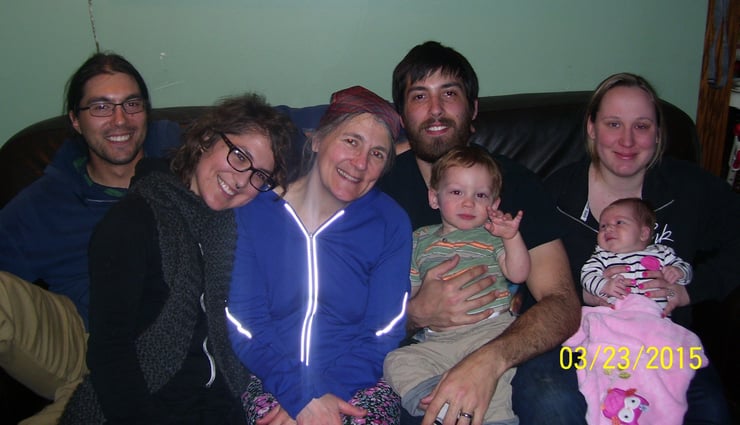 Kaia with her children (left to right): Jens, Nora, Kaia, Ivan with son Eli on his lap, and Ivan's wife Brittney with daughter Ava on her lap. Ivan's family lives with Kaia.