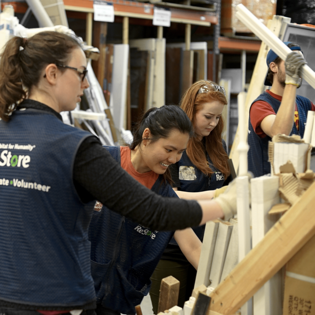 Just three weeks into their summer internships at Medtronic, a group of nine interns spent the day volunteering at the Twin Cities Habitat for Humanity ReStore. They were excited that the company felt it important for all of their employees, including interns, to spend a day during June out in the community doing service work as part of Medtronic’s “Project 6” program. Project 6 comes from the sixth tenet of Medtronic’s mission statement, “Give Back to the Community.”

Intern Mary Clare Durocher said she and the other interns chose to spend their day at the ReStore because they liked the idea that the ReStore earns money to support Habitat. She said Medtronic wants their employees to get out and get hands on in the community rather than just raising money from their cubicles at the company. “They want to get us out into the community during working hours,” she said. “It’s really attractive that they not only have a mission, but that they live it and that they ask all of us to live it.”

Located at County Road D and 35W in New Brighton,  just 10 minutes from Medtronic’s main campus, the ReStore was an easy choice for Durocher and the other interns. Doing a wide variety of small projects in the store and being able to immediately see the results of their efforts also appealed to the group. However, from the amount of chatter and laughter the interns shared, it was pretty clear what they liked most about the experience was spending time as a team at the ReStore.

If you or your employees are looking for a place to volunteer that is fun, great for team building, isn’t dependent on the weather, and that makes an important contribution to the community, check out the ReStore. Visit restore.tchabitat.org.