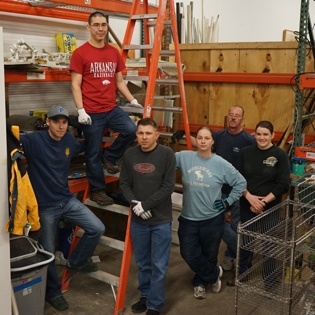 Quick, efficient, and wearing lots of smiles. That describes the six members of the U.S. Coast Guard Marine Safety Detachment (MSD) in St. Paul who came sailing in to spend a morning volunteering at the Twin Cities Habitat for Human for Humanity ReStore recently.

MST2 (Marine Science Technician Second Class) Laura Hurt came a long way to get to the ReStore in New Brighton. Before being posted to Minnesota, she served four years in Juneau, Alaska and four years in Honolulu. When she’s not volunteering, she’s cleaning up oil spills, doing inspections, training, and reaching out to connect to the community.

When she was asked why the group was at the store she said, “We wanted to make a difference to the community and do some outreach for the Coast Guard. Basically we want to let everyone know we’re here and we’re doing good stuff!”

“We love it whenever members of the military volunteer at the ReStore,” ReStore Volunteer Coordinator Alicia Weagel said. “They come in ready to work as a team and get a lot accomplished in a short a time.”

“They get done in a single shift what we have on our checklist for an entire week,” ReStore staff member Jan Hagerman added.

The team at the ReStore included 2 Chief Warrant Officers, a Boatswain’s Mate First Class, a Machinery Technician, and a second Marine Science Technician. Most of the Coast Guard Reservists at the MSD are from the Twin Cities. None of the active duty Coasties at the store were from Minnesota.

“Most stations around the country do a lot of volunteering in the community,” Hurt said. “Since I’ve been here I’ve already volunteered at the Salvation Army and worked on a Coats for Kids drive. Making a difference to the community is part of the Coast Guard’s mission.”

“Wherever they’re from,” said Hagerman, “we love having them. It’s almost hard to imagine how much we could get done if we had units like these volunteering with us every week.” She watches them form a bucket brigade to clear out an area of the store’s warehouse area. “The Coast Guard’s motto is Semper Paratus – Always Ready - and this crew has been ready for everything we’ve thrown at them!”

The volunteers from MSD St. Paul returned a second time to the ReStore last Friday. The ReStore team is hoping they return frequently.