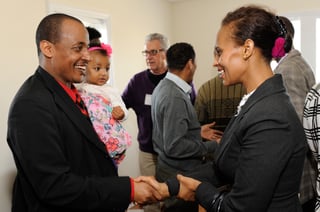 On the most gorgeous Minnesota February Saturday in memory, families, neighbors, volunteers, and donors came together to dedicate two Habitat homes in Blaine. Kids were running with new friends to the playground next-door, adults were unloading trays of breads, vegetables, and stews on the table, and there was a lot of laughter as everyone gathered in the main room for the dedication ceremony. Win Curtiss, Twin Cities Habitat for Humanity Dedications Committee member, smiled around at everyone as he gave the welcome.

“It truly does take a village to build a Habitat home,” Win said to the crowd gathered in a circle around him. 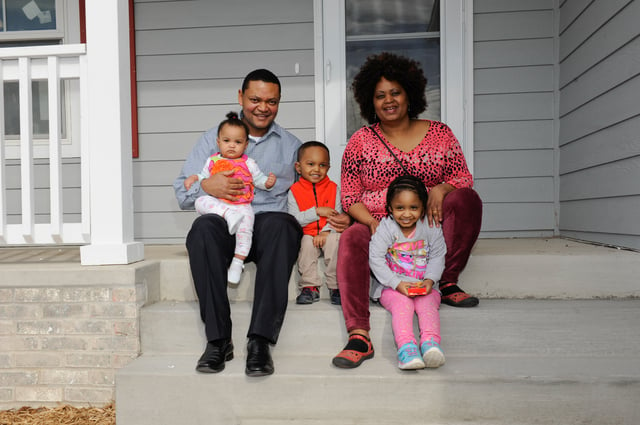 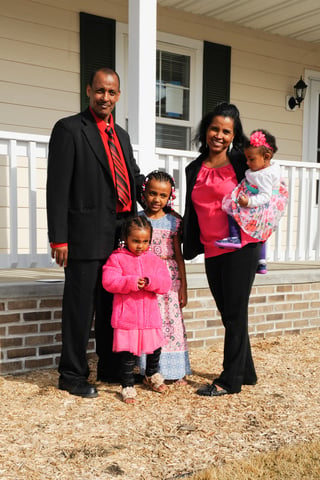 “Next I need to say thank you to Habitat for all of this. You build such beautiful homes, and you help low income people. Thank you Habitat. This is the work of God.”

Many “Amens!” from the crowd echoed Samson's words. Then Samson turned to Terra Lumley, the Site Supervisor for his home.

“First I thanked God, second: Habitat for Humanity, and third: Terra. That’s the order!” Everyone laughed. “Terra is the soul of this home. She guided everything and made this home possible. Thank you and God bless Terra.”

Next, Terra echoed Samson’s praise of the volunteers who worked alongside him to build his family’s home.

“I want to especially thank the first-timers that gave Habitat a shot,” Terra said. “It’s the work of dedicated volunteers that keep our mission alive.”

Terra also thanked Amy, a Blaine neighbor who had welcomed three recent Habitat homebuyer families into her home and gotten to know them, making them feel welcomed and accepted in the neighborhood. Amy wanted to make sure the two new homebuyer families felt welcomed, too.

“Welcome!” Amy said. “Our neighborhood will be better for having you here.”

The major sponsors of the two homes in Blaine were Thrivent Financial and Wells Fargo. A spokesperson from Wells Fargo, Kristi Carstensen, offered a word of thanks.

“We have the privilege and great honor of partnering with Twin Cities Habitat,” Kristi said. “I’m honored to be a part of your story.” She explained that Wells Fargo has donated $4.6 million to Habitat for Humanity and participated in 136 Habitat projects. For the two Blaine homes, 385 Wells Fargo team members put in over 3,000 volunteer hours. 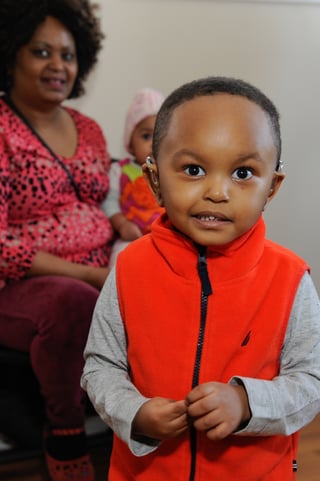 Laura Tanner, Major Gifts and Planned Giving Officer at Twin Cities Habitat, reiterated the theme that it really does take a village to build a Habitat home.

“On behalf of Habitat for Humanity,” Laura said, “I want to thank the communities that made this possible, including the sponsors, donors, volunteers, and families. This is work we cannot do alone.” Addressing the families, she said: “I hope your homes are an opportunity and a strong foundation for education and success.”

After Samson’s pastor delivered a powerful closing prayer, the merriment resumed. Those who brought food made sure everyone had a plate. Terra opened up the second home for tours. Kids, who had tried to be quiet for the ceremony, were once again laughing and playing outside. When it was time to clean up, people came together just as they did when they were building the homes, and the place was back to its pristine condition in no time.

Samson’s family was the last to leave. With one look back at the house, Samson’s daughter grabbed his hand and they raced across the lawn to their van by the playground—knowing that, in a few short weeks, this would be their forever home.