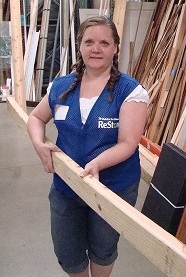 Twin Cities Habitat will soon serve its 1000th homebuyer, Bobbi. Bobbi is honored to fill the role, and grateful to partner with the organization. “I am so grateful that Habitat exists for someone in my position – for someone who hit hard times, and is starting over.”

Before applying for a Habitat home, Bobbi and her family moved around … a lot. When they were newly married, Bobbi and her husband bought their first house; there was enough room for the two of them, as well as the child they planned to have.

Though things seemed stable at first with her husband’s job and the new home, the next few years would prove to be trying. With the relocation of her husband's employer, they were forced to move to Seattle. This didn’t last long, and they soon had to move back to the Twin Cities area, her husband now unemployed. Bobbi and her husband were divorced shortly after.

Bobbi was left to raise two children, supporting them as a single mom.  They moved frequently – from rental condos to apartments to small houses – eventually ending up in the one bedroom apartment they are living in now.

Bobbi and her family are now living in an apartment so cramped they can't have friends over (much to the dismay of her 15-year-old daughter, Laurie). Bobbi's son Evan, who is autistic, is sleeping in a walk-in closet with enough room for only a bed and a dresser. Bobbi's father, also with them, is using another closet as a bedroom.

“I will love having an actual home, an actual bedroom,” says Evan. Laurie is excited to be able to invite friends over. Breathing a sigh of relief, Bobbi can't wait to finally have a safe, stable home to raise her children in.

Bobbi is finishing the last of 150 sweat equity hours at the ReStore in New Brighton (you can see her working in the photo above). After, she will begin volunteering full-time at her new home's build site, where she’ll put in another 200 hours. “It’s a lot of work, but it’s worth it. I’m grateful that there is an affordable option for someone in my position. It’s certainly not a free ride – I’m accountable to Habitat, and it’s like a second job – but finally having a stable home will be a wonderful change for my children.”