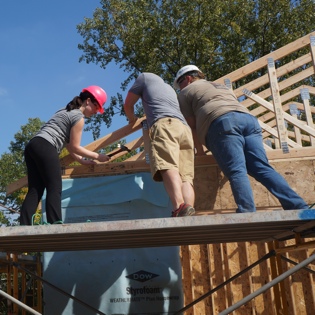 Laughter was the most prevalent noise on the site of the Habitat house Cargill is building in Crystal. The banter of crewmembers competed with the sound of saws and hammers on a spectacular fall day as volunteers from Cargill’s dressing, sauces and oils team worked. And it wasn’t all fun and games; this crew knew how to get the job done.

Under the watchful eye of site supervisor McKinsie Clyde, it took only 70 minutes for 4 volunteers to put all the roof trusses on the new garage. At the same time, the other 5 members of the team, and one of Habitat’s AmeriCorps members, fitted into position all the soffits on the home. “This is a really good group,” Clyde said. “They’ve got lots of corny jokes, but they get the job done, too.”

This was the 6th house that K.T. Anderson, one of the Cargill volunteers, had worked on. She loved the opportunity to get to know her teammates away from the office, and liked the fact that she was learning to skills she could use, “…on projects around my own house.”

Teammate, Josh Murphy, said, “This house is just one example of how Cargill supports its employees in giving back to the community.” Murphy joined the team about a year ago and his southern drawl could be heard keeping spirits uplifted as he encouraged, cajoled, and made wise cracks to his teammates.

“This is something we do every year,” Anderson said. She was all smiles and energy as she expressed appreciation for the opportunity to build a home for a family in need, as well as for the chance to learn more about the need for affordable housing. “It says a lot about the company we work for that they support us to volunteer like this…That’s something we can be proud of as a company.”

Both Anderson and Murphy were looking forward to meeting the new homeowner. “It’s amazing to know that Cargill, and all the people who volunteer to build the house, are changing the lives of a family,” Anderson said. We couldn’t have said it better.