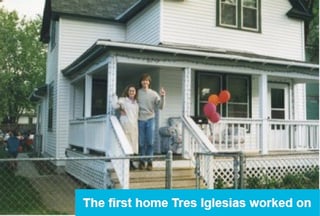 Members of the Tres Iglesias coalition, a group of three churches in the Prospect Park neighborhood of Minneapolis, know how to organize build weeks with Twin Cities Habitat for Humanity. After 25 years of partnership, they’ve created a well-oiled machine.

“Everybody is involved in some capacity or another,” said Paul Philpott, who serves on the Tres Iglesias coordinating committee. “It’s the most successful cross-community endeavor we do. I don’t think there’s anything that matches this.”

Paul is a member of St. Frances Cabrini Catholic Church, where Father Tom Garvey was initially approached by Twin Cities Habitat in 1992 to organize a build week. Wanting to participate but worried about filling all the volunteer slots, members at St. Frances Cabrini reached out to their Prospect Park neighbors: St. Cecilia’s Roman Catholic Church and Prospect Park United Methodist Church. They knew that, when they worked together, they could build great things.

In fact, Tres Iglesias was so successful at recruiting volunteers that they now do two build weeks in the summer and a two-day build in the winter. And they believe that everyone should be able to participate, whether or not they’re able to swing a hammer. That’s why they’ve created special volunteer roles, like a site host who welcomes everyone and arranges breaks and lunch; a tool manager who organizes and distributes tools on site without doing heavy labor; and the food preparers and deliverers who create delicious lunches for volunteers. 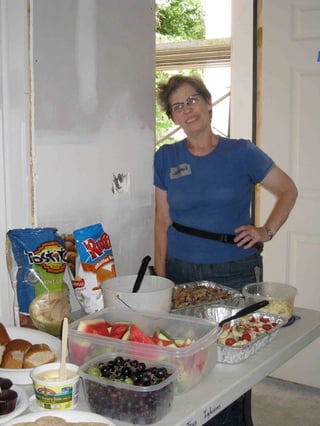 Most groups have volunteers bring their own lunches to a build site, but providing lunches not only gives more congregants the opportunity to serve, but Tres Iglesias has found that breaking bread together can build bridges as well. Paul explained that one year, some of the neighbors of the build site were upset about the construction noise and volunteer parking in the neighborhood.

“A site host did a good job of bridging gaps in that situation,” Paul said, “by sharing lunch with the neighbors. Being able to sit down and share food together on site really helps to break the ice.”

“Many people have come to have personal relationships with members of the other churches,” Paul said. “The coalition opens up avenues for cooperation between the churches.”

If excellent organization and unique volunteer opportunities are two ingredients in Tres Iglesias’s success, then Habitat’s volunteer experience is a third. 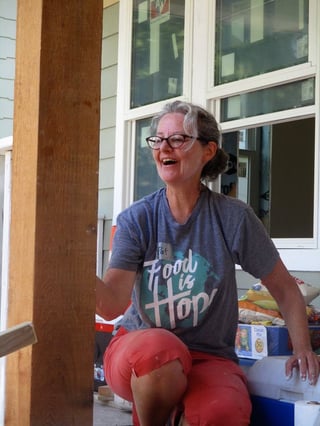 “The biggest appeal of Habitat is that it involves concrete, physical work that you can touch, and it involves people you can meet,” Paul said. Some of his best memories involve working side-by-side with families who will soon be purchasing that very house.

“It’s so inspiring to see the family’s enthusiasm and joy at seeing their own home taking shape in front of them,” Paul added.

Volunteers with Tres Iglesias have developed the tradition of singing the hymn “On Holy Ground” each morning on site before they get to work. Through the raising of walls and the breaking of bread together, Tres Iglesias volunteers are creating holy ground—for themselves, and for the family who will soon be calling that house a home.