This story is written by Terry Barnes. She's our Construction Support Associate, and has worked at Habitat since 2000 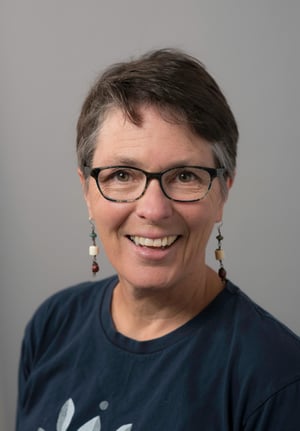 In 1983, my husband and I bought our first home in the Whittier neighborhood of Minneapolis. Within two months of buying it, we had completely refurbished it from the ground up and had the homeownership crash course of our lives.

Our first home had a remarkable history. It was built in South Dakota in the early 1800s and had been brought to Minnesota in 1920 on a horse-drawn sleigh (the previous owners showed us a picture of it!). It had been moved and added onto several times in Minneapolis, and it survived several fires.

My husband and I both knew we wanted to buy a home, but at that time in the 1980s, interest rates were astronomical, and we didn’t have the income for a conventional home purchase. This was around the time when Twin Cities Habitat was starting up, but we didn’t know about it—we looked at other local nonprofits and housing programs, and eventually we received a loan from MCDA (now called CPED). Interest rates were 11%, and the only thing we could afford was an old smoke-damaged home that we would fix up ourselves. The home we found cost $16,000 and had been boarded up for two years with a lot of damage from a fire and needed a ton of work. 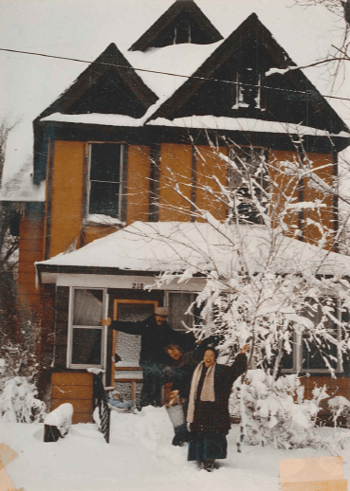 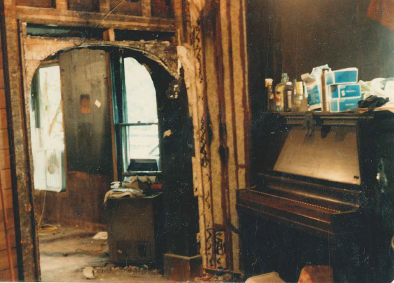 Above: the house before work was done, and the living room.

We had no construction experience, a baby less than a year old, and full-time jobs—but for better or worse we dove right into the hard work! Luckily we found a carpenter named Milo. We did the gutting work and he did the skilled building work. We did as much labor as we could ourselves when we weren't working. I also needed to carefully manage the budget and hire the heating contractor, electrician, plumber, and roofer. It was exhausting.

We gutted the walls back to the old studs which had thick, square-headed nails from the 1800s. We took down a few walls, replaced the roof and ceiling, installed new windows and siding, applied an anti-smoke primer, and so much more. We managed to have some fun and had friends join in—I had a group of women over for demolition and they loved taking down walls with sledgehammers. 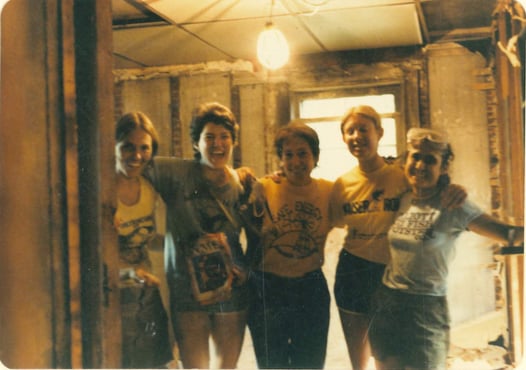 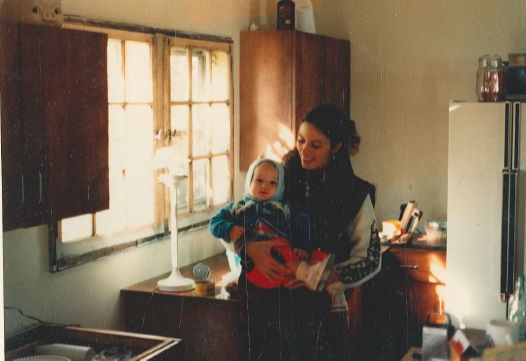 Above: Terry and her demolition team, and Terry with her baby in their new home.

After two months, it was good enough to move in. But with our inexperience there were some things we hadn’t accounted for—like kitchen cabinets and trim for the floor and windows. Over the years we’d fix and add things. But it was our home, and we loved living there for the next 13 years.

Years later I found Habitat. I had worked for 17 years as a social worker and I knew firsthand how much need there was for housing. In 1998, I went to drafting school and to be a better drafter I needed to learn more about construction, so I volunteered at Habitat with Site Supervisor Tony Beckstrom. With Tony I learned more about framing, structure, and all the details I would need to draft well. Tony nudged me into a job at Twin Cities Habitat when it opened up, and I’ve been working here ever since.

I’m so glad Twin Cities Habitat for Humanity exists. Back in 1983 we would have done anything for Habitat’s program. We would have loved the kind of homeownership education classes, one-on-one financial coaching, excellent interest rate, and rehab help that Habitat provides. We would have applied for the homeownership program and Habitat mortgage in a heartbeat. And, had they been open then, we would have gone to the ReStore Home Improvement Outlets for everything—windows, doors, trim, tools, paint, lumber, etc.

Over the years I’ve been very involved in my community. When I lived at that first home in Whittier, I was part of the group that conceived of the Midtown Greenway bike trail and helped organize to make it happen. I love organizing neighbors to create a better neighborhood, and I love working at Habitat because it’s also very centered on community. In my work, I have the joy of working with families both before and after they purchase their Habitat homes. I teach landscaping and yard maintenance as they’re preparing for homeownership, and then after they’ve moved in, we work together with Master Gardeners to landscape their yard exactly how they want.

For me, a happy home is like a well-tended garden—a place where people can grow and thrive. It takes work and a lot of helping hands, but it’s so worth it.