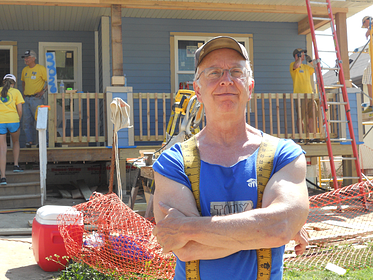 Soon to turn 60 years old, Site Supervisor Tony Beckstrom has spent the last 25 years sweating it out with Twin Cities Habitat for Humanity, and has no plans to slow down.

He gets that question a lot, actually; “when are you going to quit?”

“What I tell people is I really don’t know,” Tony said. He pointed out that, although he’s about to turn the “big six-zero,” he feels as good as he did in his 30s.

“The good Lord put me in this position and I’m sure he’ll let me know when it’s time to leave,” he said.

"You can always spot Tony a few blocks away with his legendary yellow suspenders," said Bjorn Erickson, our Constituent Engagement Associate. Bjorn also served as an AmeriCorps member under Tony's direction about seven years ago, helping build homes at Heritage Park in North Minneapolis.

"The best thing about Tony is his positive attitude," Bjorn said. "I have never seen him upset or in a bad mood. He loves working with volunteers of all abilities, enjoys joking around with regular crews, and loves getting to know the Habitat homeowners."

Tony first started volunteering with Twin Cities Habitat for Humanity in the late 80’s after hearing about the organization through his church. He was a building inspector at the time, and thought such an organization would be in use of his skill set, though he wasn’t particularly sold on the concept at the get-go.

Utilizing volunteers to do trade work, like building a house, didn’t strike Tony as the most efficient way to get things done.

“There were some doubts,” Tony said with a chuckle. But, after 25 years, “I think we’ve shown it actually works,” he said. 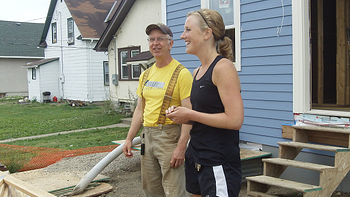 Tony became a member of Habitat staff in 1991 and has been working in North Minneapolis the entire time. He grew up in the neighborhood and his familiarity with and dedication to the community has proven invaluable to Habitat.

“I’ve been here my whole life,” he said, adding, “it’s really, really neat to contribute something positive to the neighborhood.”

Things in North Minneapolis, especially the Jordan neighborhood, have changed quite a bit since Tony’s childhood.

The neighborhood faces several issues, and “it’s fertile grounds for us,” said Tony.

In his 25 years of Habitat work, Tony has seen the affiliate change quite a bit as well.

It started off small, but now has more volunteers, more monetary support and more homes going up each year.

“It’s become very well-respected and well-known locally and across the world,” Tony said.

As a Site Supervisor, it’s Tony’s job to set volunteer teams to work, providing guidance, support and plenty of comradery.

The best part is working with such great volunteers for such a worthy cause, he said. Placing Habitat families and their children in a much-needed home, “it’s hard to beat that,” Tony added. 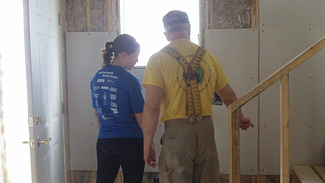 Though the end result is well worth the toil, workdays aren’t always easy. The toughest part, Tony said, is building a home in a Minnesota winter.

“The cold and the snow just make everything harder,” he said. Volunteers are a bit hard to muster up in the heart of winter, and imagine moving building materials from a truck over plow piles and through three feet of snow.

Luckily, those snowy days are relatively few and far between (though perhaps not as few and far as we’d prefer), and Tony has plenty of good memories.

Many are from the time spent “rehabbing beautiful old homes in the 90's with my crew of retirees,” he recalled.

The long-lasting relationships he formed are true gifts, and Tony still works with some of those folks today.

When asked what it takes to be a good site supervisor, the 25-year veteran said:

“It also helps immensely to have a passion for the cause,” he added.