Walter Mondale reflects on 50 years of the Fair Housing Act

Minnesota suffers from some of the worst racial disparities in housing in the nation. A long history of both overt and subtle racist practices got us here. In 1968, Walter Mondale, who was representing Minnesota in the US Senate at the time, co-authored the Fair Housing Act (FHA). It was signed into law a week after Dr. Martin Luther King Jr. was assassinated. For the first time in American law, discrimination was expressly forbidden in housing. But, 50 years on we are still a long way from what Mondale says is the FHA’s ultimate goal of an integrated society. He spoke about the FHA’s legacy from the offices of Dorsey & Whitney LLP, where he is Senior Counsel.

Mondale: It’s been a slow process. We passed the bill and people said we couldn’t, so there was hope. But enforcement has been slow. Some officers of the law have done as little as possible and often even resisted what should be done. For years we had trials where you had to prove the defendant had racial intentions. Otherwise they’d argue there was no violation of the law.

Then in 2015, the Supreme Court, speaking through Justice Anthony Kennedy, said ‘No, intent is not the issue here. If the impact divides and separates people based on race, it violates the law.’ That was a big decision and took that excuse away from those who were dragging their feet.

But the current administration sure doesn’t want this law enforced. Ben Carson, the Secretary of Housing and Urban Development, has said just let things rest until 2020. How they make that consistent with their oath of office is beyond me. We’ve got to somehow force them to face up to that, and press local, state, and federal officials to enforce this law.

Q: Do you have hope for the future?

Mondale: I think in some ways the environment is a little easier. I know that sounds strange. But people have studied this and are much more aware of the horrible consequences of segregated societies than they were in 1968. There’s evidence today that where kids grow up together, without racial separation, they do much better. With that realization I hope we will get something done now.

I’ve been for trying to get politicians to speak out on this. But we need everyone. We need the realtors. We need the lenders. The way Bremer Bank is working with Twin Cities Habitat to help people buy homes in communities they choose is great. We need more of that.

Q: Do you think the mortgage interest deduction needs to be reworked to advance fair housing?

Mondale: We housed a whole generation of young Americans who had fought for us using the GI Bill and the mortgage interest deduction. It helped make America great and had tremendous national support. But those were modest homes.

Today it is too weighted towards very high-income households buying very large homes. But there’s an expectation in American that you can deduct mortgage interest. You’re going to have trouble changing that. Maybe if we had a mortgage interest tax credit* that would do it. But it’s hard to change deductions that people are used to.

Q: Persistent disparities in homeownership, incomes, and education between white and non-white residents continue to plague the Twin Cities. What kind of policy, regulation, or legislation would be a game-changer to set us on a different path towards more equity in these areas?

Mondale: I’ve worked very hard on this problem for most of my public life and I think we made some progress. But we’re still looking at gaping discrepancies between the lives of blacks and whites in America and in Minnesota. Surprisingly, for a state that really believes in openness and decency, and I think we do, if you look at racial disparities we are not doing well at all. I’m not in public life anymore. But I think our leaders should look at those levers we put in place, most of which are still law and try and get them enforced. Get the lenders to get serious about this. Help young families have a chance.

Q: What are your memories of working with President Carter when he came to the Twin Cities in 2010?

Mondale: We need to keep helping Habitat for Humanity in its work. I spent a lot of time with Carter when he came. It was quite a sight. He loves to build. He brings his own hammer and tools and loves calculating angles and that sort of thing. Here’s a guy that’s 93 and still going strong—very impressive. And those homes built and repaired that week have made a difference in the community. I remember the homebuyers we met working on their homes and how pleased they were. 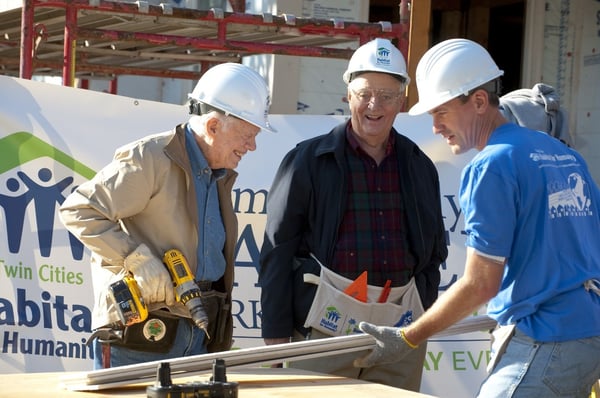 I’m glad you’re talking about this. We need this. The evidence is there: where housing integration happens it’s better for everybody, but still there’s a lot of resistance.