Minnesota Housing Finance Agency has been a Twin Cities Habitat for Humanity partner for nearly 20 years. We're thrilled that, this year, the agency has awarded us $1.7 million to support our homeownership program. This is by far the largest award we have received from Minnesota Housing in the history of the partnership.The agency's support will contribute to 49 homes throughout the seven-county metro area. This means 49 local families will have safe, stable homes where they can raise their kids. Investment in affordable homeownership impacts every area of a family’s life:

Plus, increasing homeownership opportunities increases our community’s tax base. In 2017, Twin Cities Habitat homeowners will pay more than $1.9 million in property taxes.

The award in action 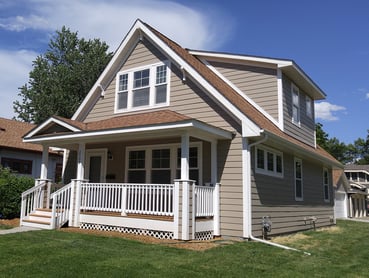 Of the total funding award, $1.2 million will be leveraged for new construction. The remaining $500,000 will go toward acquisition and renovation of existing homes. All 49 homes will be sold to qualified Habitat homebuyers with Habitat’s affordable mortgage*.

As part of our Impact 2020 Strategic Plan, Twin Cities Habitat has expanded the number of homes we acquire, rehab, and sell to Habitat homeowners. While this strategy has been part of our homeownership program for many years, this is the first time Minnesota Housing has contributed funding toward property acquisition and rehab.

This funding award adds to Minnesota Housing’s previous support of our Impact 2020 Strategic Plan. Last year, the agency contributed funding toward our new open market program. Through this program, qualified homebuyers can use Habitat’s affordable mortgage* to buy a home for sale on the open market in the metro area.

Minnesota Housing has prioritized its resources for programs that serve populations traditionally under served by the conventional housing market. This includes communities of color, single-headed households, and households with people with disabilities. Twin Cities Habitat has an excellent track record of making homeownership attainable to these groups. In the past five years:

The agency also supports the fact that Habitat's homeownership opportunities are spread throughout cities and towns across the seven-county metro area.

Earlier this year, Mary Tingerthal, Commissioner of Minnesota Housing Finance Agency, spoke at our Women of Habitat Hope Builders Luncheon. She commented on Habitat’s innovation through our Impact 2020 Strategic Plan and our new partnership with Bremer Bank. Tingerthal, a former chair of the Twin Cities Habitat Board of Directors, commented, "When Twin Cities Habitat for Humanity says they’re going to do something, they deliver. And they deliver both houses and stable families."

The agency's award to Twin Cities Habitat is just one portion of the total state funding for affordable housing. Minnesota Housing awarded a total of $126 million to organizations this year. These funds are to be used for preserving or creating 1,823 affordable housing units in 60 developments in Minnesota.

As a member of the Homes for All MN coalition, Twin Cities Habitat advocates for investments in affordable housing around the state and across the housing continuum. This includes all types of housing, from emergency shelters to homeownership.

Other Homes for All member organizations were awarded funding, too, including:

In a press release, Governor Mark Dayton commented on the Minnesota Housing awards: “This funding will stimulate jobs and economic development across our state, while providing housing for Minnesotans in need. I thank Minnesota Housing for their work in securing these new investments, and putting these funds to good use in our communities. I look forward to working with the Legislature to make additional investments next session.”

We’re so grateful for many years of support from Minnesota Housing Finance Agency. Investment in stable, affordable Habitat homeownership impacts health, education, social connections, and economic independence. And the impact multiplies for generations.

* All Habitat mortgages are originated by TCHFH Lending, Inc., a wholly-owned subsidiary of Twin Cities Habitat for Humanity, Inc.