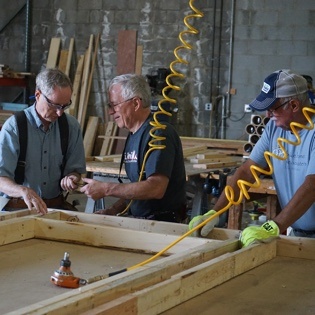 The loud rattle of air hammers driving nails into wood was about the only noise in Twin Cities Habitat for Humanity’s Panel Plant. Eleven members of the Southside Regulars Crew eschewed conversation in favor of focusing on the work of building wall panels. By the end of their Tuesday volunteer shift, they had completed almost all of the panels for an entire Habitat home.

Years of working Tuesdays as Regular Crew volunteers has resulted in a team that knows what each member can or likes to do. While they’re working, they’re quiet and efficient and driven by getting the job done. That all changes when they break for lunch.

When asked how they all knew each other, Crew Leader Dick Hertel said, “For the most part, we didn’t know each other before signing up.” He added, “We’re from all over the Southside.” Dick’s been volunteering with Habitat since early retirement in 1989. Other crew members chime in with the names of their cities: Eagan, Bloomington, Prior Lake, Eden Prairie, Richfield and South Minneapolis.

Crew member Jim Wehri said, “I think it was all because we wanted to volunteer on Tuesdays.”

Rick Shultz said, “Some of us were part of a pyramid scheme. These guys are retired pilots.” He points to Tom Alberto. “He volunteered then asked another pilot, and then another.”

Another crew member shouts, “Yeah, until somebody said we have enough pilots!"

Rick nods toward the heckler. “He’s an engineer. There’s a lot of engineers, not just pilots.”

“We like to build things,” one of the engineers says.

“I spent 30 years behind a desk,” says Walter Goins. “I just wanted some place where I could swing a hammer instead of stacking papers.”

The Southside Regulars work wherever they are needed most. In addition to the Panel Plant, they’ve work on A Brush With Kindness (ABWK) home repair projects, new home builds, as well as home rehabs. They like the feeling of the immediate help to a family they get from ABWK. They enjoy the Panel Plant because the results of their work are so visible. And home building brings the reward of knowing you’re changing the life of a family.

When asked what they liked most about being part of a regular crew, someone said, “I like to do just about everything.”

The comment was countered by, “I do things at Habitat I refuse to do at home. Like painting.”

Dick laughed. “But we’ll vacuum!” He told the story of having to clean up after an installation crew had finished laying carpet. “Some of the guys got out vacuum cleaners and vacuumed the carpet.” He laughs again. “They wanted to make sure nobody told their wives they did vacuuming!”

“All of us on the crew feel pretty blessed in our own lives, and we wanted to give back,” Rich says. “We’re aware of how difficult it is without a home of your own. Habitat makes that happen.”

He continued, “Habitat’s got a great program and being on a Regular Crew gives us a chance to show up and make a difference. We like that.”

Habitat likes that, too, Rich. We want to thank all the members of the Southside Regulars for their hard work and dedication. Having volunteers that can be counted on week in and week out is critical to completing all of Habitat’s home build and repair projects.

Being a Regular Crew member is not an exclusively male domain. Several of Habitat's crews have women on them, and every crew is welcoming of women who want to volunteer regularly.

To learn more about how you can join a regular crew, click on the link below.