Chester: an Army Veteran in need of some repair work so he could stay in his longtime home.

Josh: a Senior Operations Manager at Allianz and co-chair of Allianz’s Operation: SERVE, looking for a way to support local veterans so they can stay in their homes as they grow older.

They both found Twin Cities Habitat for Humanity’s A Brush With Kindness paint and repair program. With additional funding and support from the Home Depot Foundation and the City of Minneapolis, it was a perfect match.

Chester served in Germany from 1956-58. When he returned to Minneapolis, he did a bunch of odd jobs—working at a plastic factory, the Minneapolis street department, maintenance at Augsburg College. His brother bought a house over 30 years ago, but then he got sick, so Chester moved in to take care of him. After some time, Chester’s brother passed away, and Chester continued to live in the house and take care of it.

Chester always loved living close to downtown. “I can just hop on the bus or go on the light rail and go everywhere. I seem to be able to get wherever I want.” So when he couldn’t keep up with some critical repairs to his home, both inside and out, he made it a priority to get it taken care of.

“You get used to it,” Chester adds, “your local grocery store, the hardware store, the drugstore.” A worker through the City of Minneapolis connected Chester to Twin Cities Habitat, and soon he was on the schedule for home repair work. 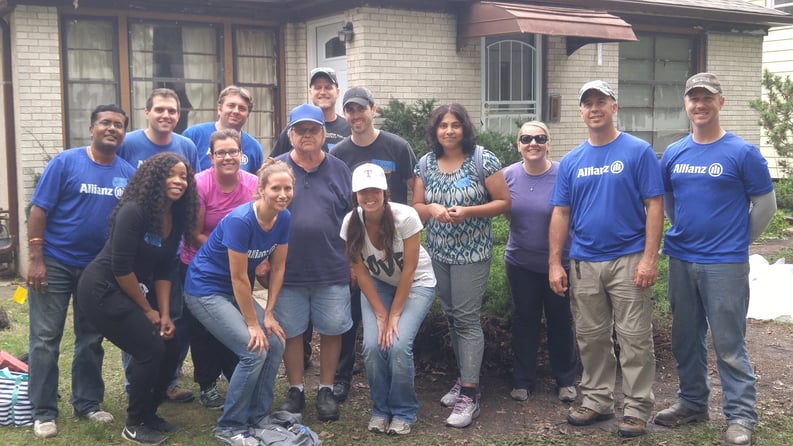 When Josh Winkleman found out about Twin Cities Habitat’s A Brush With Kindness program and Veterans Initiative, he was thrilled.

“A lot of people related to this project, especially at Allianz,” Josh says. “It was a really great alignment of a lot of the things we seek to reinforce in terms of our industry and our values.” One thing Allianz does is help people plan for retirement—and many people have a goal to stay in their own home as they grow older. Plus, Allianz's Operation: SERVE looks for ways to support veterans in the local community. Chester’s project was the perfect fit.

The crew from Allianz got quite a bit done over four days last September. They replaced two exterior doors, put on storm doors, installed a new hand railing, tore out and replaced the front walk, replaced the exterior soffit, added venting, and painted the soffit and trim. Plus, they had some fun in the process.

“It’s a good opportunity for us to work together,” Josh says. “I think that’s the part people enjoyed the most.” Everyone loved getting to know Chester. Throughout the week, he’d keep the volunteers company, sharing stories and good conversation.

“With our bigger crew on Saturday, we had like thirteen people,” Josh says. “At any given time you’d have two to three people just chatting with Chester. And when we were done on the last day, we spent some time at the end of the day just hanging out with Chester in his yard. He was a lot of fun to work with and be around. He had some good stories, and he was very appreciative, very humble, and grateful about the whole thing. It was a great opportunity for everyone!”

Everyone should do it

Would Operation: Serve recommend A Brush With Kindness to other groups? According to Josh, absolutely.

“You don’t have to have any skills, any tools—you just have to show up. That was the biggest trepidation for our volunteers, because remodeling is a skill, and there was a long list of things for us to accomplish. But literally everything we needed was there, and there were plenty of people to oversee and guide the work. Not only did we get to help Chester, but we got to learn new skills.”

The group from Allianz liked A Brush With Kindness so much that they signed up to volunteer again this fall.

In addition to Allianz, a group from Home Depot worked on some of the projects last fall. And in April 2017, A Brush With Kindness came again to complete Chester's projects, repairing critically damaged drywall sections on the ceiling of several of Chester’s rooms.

Would Chester recommend A Brush With Kindness to other people like him?

“I say go ahead and do it!” Chester says. “It would be good for anybody. It’s so nice to have it all taken care of now.” Chester also enjoyed chatting with volunteers and getting to know the different personalities. And he’s very happy to be able to stay in a home and neighborhood where he's created happy memories, both old and new.