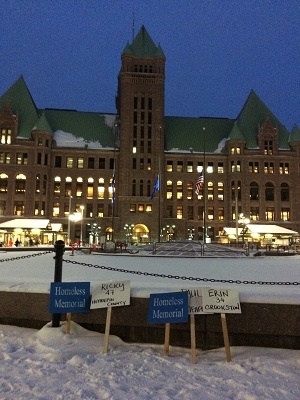 On Thursday, December 15, 2016, Simpson Housing Services hosted the 32nd Annual Homeless March and Memorial Service. Each year the event honors those who passed away while homeless, individuals who were formerly homeless, and advocates for the homeless community who have passed away.As evening darkness fell upon the city, community members gathered at the Hennepin County Government Center in downtown Minneapolis. Each of us held a sign with the name, age, and city of a community member who had passed away in 2016. Everyone was bundled in their warmest winter gear on one of the coldest nights of the season thus far—even colder than Mars! It was so cold I could think of little else as we silently marched through downtown Minneapolis and down Nicollet Avenue; silently begging my tingling, numb fingers to continue grasping the sign I held to honor Bob, 52, Duluth.

After our cold and somber march, we gathered at Simpson United Methodist Church for a memorial service. The Homeless Memorial March and Service is purposefully focused on honoring the individuals who passed away this year; each person remembered was someone’s child, friend, and neighbor, and they each deserve to be remembered with love and respect. Candles were lit for each community member who had passed away, as their names were read aloud. Afterwards, people shared their memories of friends and family on the list. More than one housing advocate commented how grateful they were that some of those being memorialized were formerly homeless, and had been able to move into housing to live their remaining days safely and with dignity. 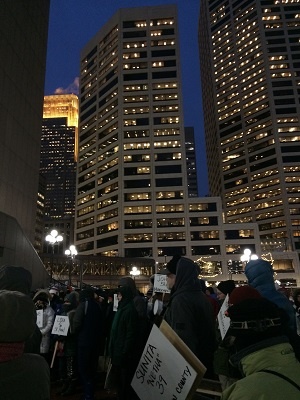 Even for those who had passed away after moving into their own housing, the detrimental health effects of homelessness were apparent. I was struck by how young everyone on the list was—on average, those who died while homeless or formerly homeless were 50.25 years old. For comparison, the average lifespan in the US in 78.8 years, while Minnesota’s average life expectancy is even higher, at 81.1 years.

On extremely cold nights, like the night of the march, exposure-related concerns like frostbite and hypothermia can be deadly for people sleeping outside, in their cars, or other areas not meant for human habitation. Beyond that, the chronic stress of homelessness and poverty is inextricably linked to health problems. In their tri-annual statewide study of homelessness in Minnesota, Wilder Research has found that mental and physical health conditions have been increasing among those experiencing homelessness over the past decade, with 60% of all adults and unaccompanied youth surveyed reporting a serious mental illness, and 51% reporting a chronic health condition.

When people have access to safe, stable, and affordable housing, they are able to focus on other areas of life, including their health. Investing in affordable housing and services is an opportunity to invest in the health of our communities—for every $1 invested in affordable housing, there is a $1.44 return on investment. That’s why Twin Cities Habitat for Humanity is proud to once again join Homes for All, a statewide coalition of more than 150 housing providers and community partners, to advance shared policy initiatives that lead to housing stability for all Minnesotans. Where we live impacts every area of our lives, and we know that Minnesota will thrive when everyone has a home that is safe, stable, and affordable.