As Sharon stated during the discussion, “If we understand the truth, then we’re in a better position to try to correct the wrongs.”

If you’ve got an hour or so, I highly recommend you listen to the full discussion. You’ll learn with your own ears about important local history and you’ll understand ways you can step up to turn the tide. The first portion of the audio provides context, then the panel discussion starts at 17:00.

If you’d rather read a recap, here goes.

Sharon Sayles Belton moderated the discussion among these four panelists:

Full bios for the panelists are at the end of this post, because I want to jump right into some of the wisdom they shared with us. 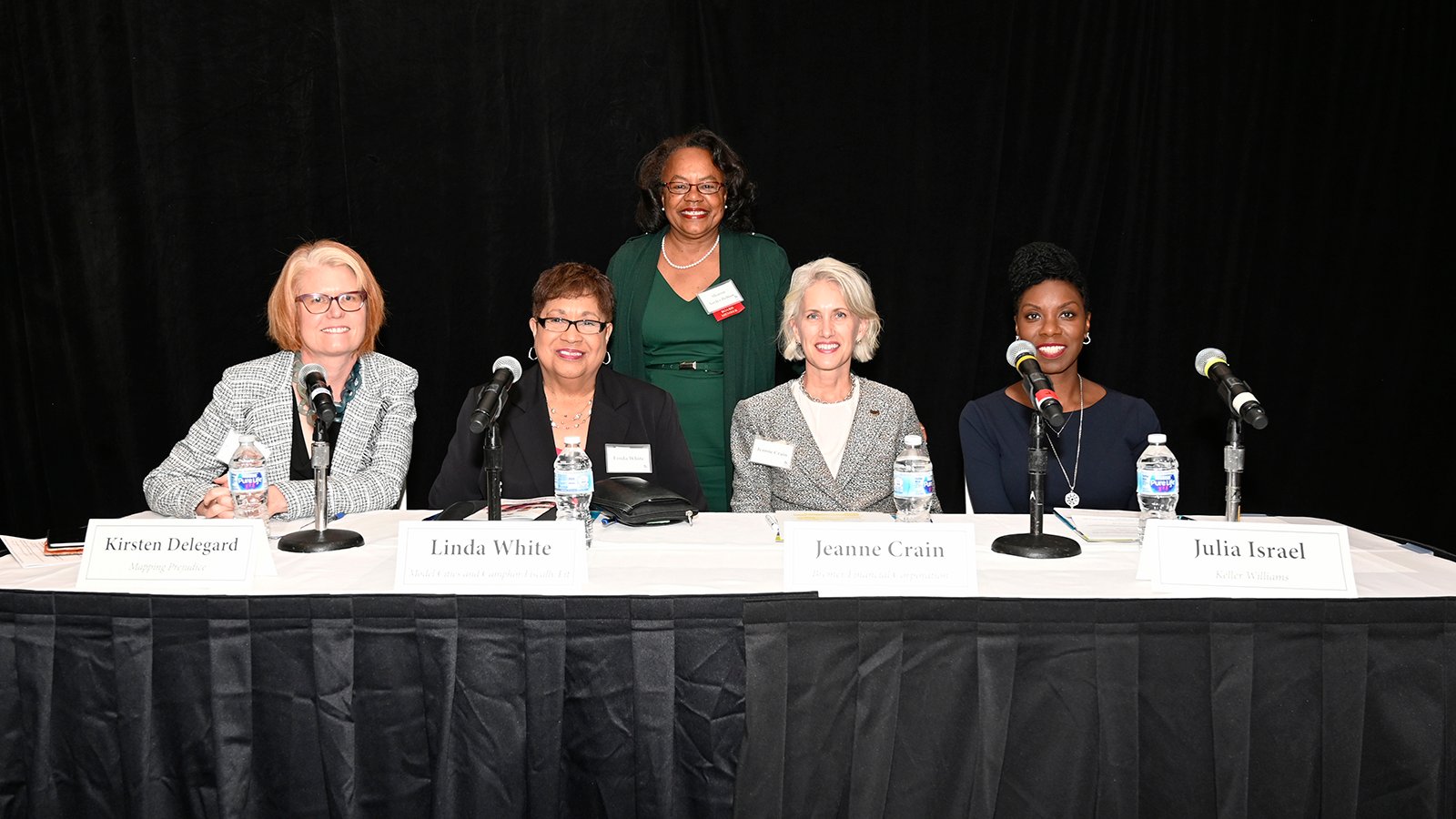 How did we get here?

Minnesota’s racial disparities are among the widest in the nation. But these gaps didn’t just happen. Racist policies and practices created them.

Kirsten Delegard opened the discussion by explaining one of the early housing practices that segregated Minneapolis neighborhoods—the use of racial covenants. Kirsten’s team at Mapping Prejudice has recruited 3,000 volunteers, which they call “citizen researchers,” to comb through 170,000 property deeds in Hennepin County to identify and catalog the use of racial covenants. They’ve uncovered 30,000 property deeds with racially-restrictive language, dating back to 1910.

“[Racial covenants] were clauses that were put into property deeds. The intent of them was to bar people who are not white from owning or even occupying property.” The language in the deeds varies, but here’s an example from Mapping Prejudice’s work:

Kirsten described this project as debunking “the central myth of our community… that Minnesota never had any kind of formal segregation…Covenants took a very racially mixed city, Minneapolis, and made it a racially segregated city.”

By the 1930s and 40s, the neighborhoods where families of color did live (where covenants were not used), were targeted with “redlining” by lenders. The federal government created maps and guidelines to advise lenders. Neighborhoods were rated from “best” all the way down to “hazardous,” leading banks to deny loans to areas where people of color lived.

After WWII, our nation experienced the largest expansion of homeownership in our history with the GI Bill. But black veterans who fought for our country were largely excluded from the benefits of this expansion due to redlining and racial covenants. These racist housing practices were happening nationwide, making homeownership unattainable for most families of color. From 1934 to 1968, 98% of all Federal Housing Administration (FHA) loans were given to white people.

It wasn’t until 1968 that race-based housing discrimination was outlawed nationwide—with the passing of then-Senator Mondale’s Fair Housing Act. And we know that didn’t solve all our challenges.

What do we still see today?

Linda White described the barriers to homeownership for her clients—credit issues, lack of savings, and high levels of debt (including huge student loans) are among the key barriers she sees for would-be homebuyers. Linda links these barriers back to a lack of financial literacy in our community.

Her solution? “Personal finance classes are needed in our high schools.” If adults haven’t had access to financial education, their children will be similarly unprepared for financial decisions. Linda shared that we don’t have many statewide solutions to this persistent challenge. 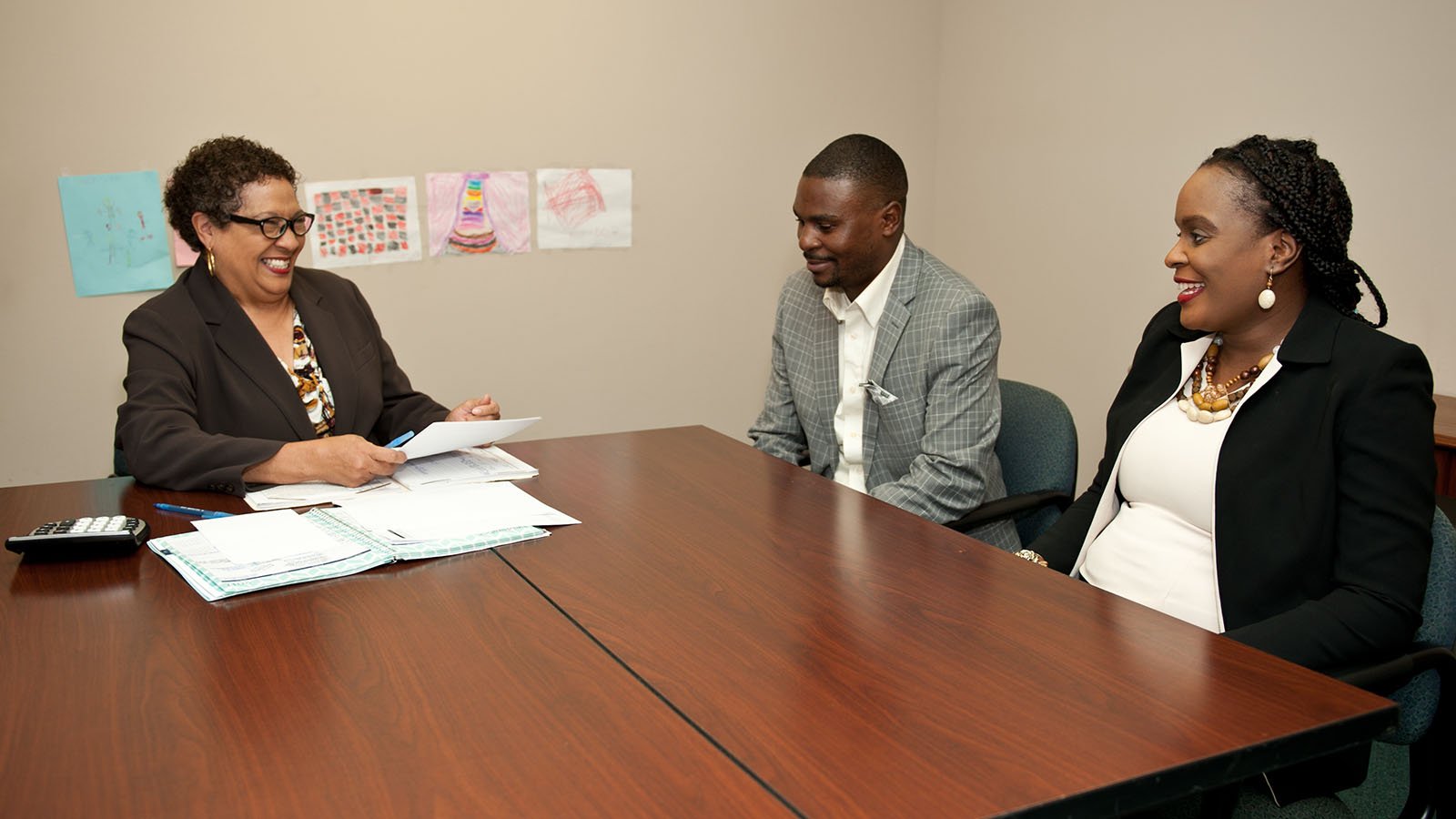 Linda also noted the lack of awareness of financial literacy and housing programs. There are many organizations and agencies across the state that do great work, but struggle to reach those who could benefit from their services.

Other barriers to homeownership come in the form of outright discrimination in real estate. Julia Israel described a few of the ways she sees racial discrimination play out for her real estate clients, despite laws intended to keep it at bay.

Julia referenced the lack of anonymity in purchase offers given the prevalent use of video cameras in homes. “They will choose your offer based on what you look like whether you want them to or not.”

Julia also described appraisers giving low appraisals to sellers of color, lenders doubting mortgage applicants because they “can’t pronounce that name,” and people who didn’t want to sit at the closing table with her clients.

This behavior is appalling, and it widens the already-abysmal disparities in our community. Because many obstacles are interpersonal, Julia explains we need to take a personal approach to curtailing them.

“People who don’t regard themselves as being effected by inequities don’t necessarily care that there are inequities. . . We have people that we influence. Family members, friends, co-workers. . . You have to speak up against that [behavior]. If nobody ever speaks up against it, it just continues.”

What’s the role for banks?

Discrimination in real estate and housing doesn’t only come from individuals. Banks and lenders have contributed to significant damage for families and neighborhoods throughout the 20th century and leading up to the recent foreclosure crisis. Sharon asked Jeanne Crain to speak to the role for banks today to correct the problems of the past.

Jeanne opened by acknowledging the reality of the wrongs. “Redlining is real. Irresponsible lending is real. The fact that banks and financial institutions have played a role in exacerbating racial inequality in America is real. So, what I also will say, is it’s impossible…to change history. But we can all come together to shape the future.”

On top of that, Bremer works to build a team of civic- and community-minded leaders. Several Bremer executives have served on Habitat’s board and are committed to social issues.

Finally, the bank focuses its philanthropy on structural issues related to its work. Bremer’s corporate giving centers on financial literacy, poverty alleviation, and affordable housing. Bremer aims to “[go] deep on a single issue,” and to do so with intentionality. And that was Jeanne’s call to action for other financial institutions, too.

What can we do about it?

We illuminate these challenges so we can create effective, lasting solutions. Sharon asked each panelist for both a policy solution and an action item for the audience.

Here’s what we heard for policies the panelists would change or implement to address our racial gaps in housing:

Each panelist was asked to close with a call to action using just a few words:

“Remember. Remember the history… The injustice we have today is rooted in amnesia. Join the struggle against forgetting.” – Kirsten Delegard

“Inform others about resources you are aware of, like Habitat.” – Linda White

“Challenge yourself to share what you’ve learned with three people.” – Jeanne Crain

“Vote. Our region’s prosperity is in the hands of the voter. We have to vote for people that are equitable leaders.” – Julia Israel

The panel discussion was incredibly powerful and informative. It’s just one part of the work Twin Cities Habitat is doing this year to learn from our history as we build the future. Subscribe below to follow our blog series which dives into some of these important topics.

Subscribe to our blog to stay up to date.

More about the panelists

Moderator – Sharon Sayles Belton served on the Minneapolis City Council for 10 years, including four years as Council President before becoming the first women, and the first African American to be elected Mayor of Minneapolis. Today Sharon is the Vice President Strategic Partnerships and Alliances at Thomson Reuters, where she is responsible the development and management of private sector partnership that serve Thomson Reuters government and law enforcement customers. She also oversees Community Relations programs including charitable contributions and community volunteerism. Prior to Thomson Reuters she was VP at GMAC where she led a national foreclosure initiative. She is an alum of Macalester College, St. Paul and a member of Twin Cities Habitat’s Board of Directors.

Kirsten Delegard is a professional historian, research consultant, editor and published author committed to making the past accessible and relevant to a broad audience. Kirsten is a co-founder and Project Director of Mapping Prejudice and she has a faculty affiliation with the Department of Geography, Environment and Society at the University of Minnesota. A third generation Minneapolitan, Kirsten has written extensively about the history of Minneapolis. She holds a Ph.D. in history from Duke University.

Linda White is the Lead Homeownership Advisor for Model Cities of St. Paul, where she oversees Financial Education and Counseling Services. Linda is the Lead Instructor for the Camphor Fiscally Fit financial literacy course and she provides Pre-Purchase Counseling and one-on-one Financial Literacy Counseling. Prior to joining Model Cities in 2014, Linda held several management positions during her 30 years at U.S. Bank. Linda has served dozens of Boards of Directors at the national, state, and local levels. In addition to her bachelor’s degree from Metro State, Linda has earned several certifications in financial literacy and education. Model Cities is a referral partner to Habitat’s homeownership program and Linda serves on Habitat’s CDFI Advisory Council.

Jeanne Crain is president and chief executive officer of Bremer Financial Corporation, a $12 billion financial services organization with locations in Minnesota, Wisconsin and North Dakota. As CEO since November 2016, Jeanne has combined her extensive industry knowledge with more than 37 years of banking experience. Jeanne is an active volunteer and community leader and recently co-chaired Governor Dayton’s Minnesota Task Force on Housing. Jeanne earned a master’s degree in business administration from Marquette University and has a bachelor’s degree from the University of North Dakota. The historic banking partnership between Bremer and Twin Cities Habitat has propelled Habitat’s growth over the last few years.

Julia Israel is a licensed real estate broker and a well-respected leader and homeownership advocate in the Twin Cities real estate community. Over the past 18 years, she has owned several real estate-related businesses and trained and coached hundreds of real estate professionals. Julia was President of the Twin Cities National Association of Real Estate Brokers, the oldest black trade association in the country. Julia has a passion for promoting homeownership, especially in diverse neighborhoods and serves on numerous real estate boards and committees. Julia is the co-founder and Chair of Umoja Community Development Corporation, a nonprofit which works to build inclusive communities where all people can attain homeownership and benefit from community development. Julia is a graduate of Bethel University. Julia is a member of Twin Cities Habitat’s CDFI Advisory Council and the Habitat Realtor® Network.