When Erv Barrett started building homes for Twin Cities Habitat for Humanity 30 years ago the build budgets were so small that he had to pull, straighten and reuse nails to save money. He’s seen a lot of changes since then, but two things that haven’t changed are Erv’s dedication and enthusiasm. He may not move as fast as he used to, and he may not be able to perform all the tasks he used to, but at age 83, he still shows up with a smile on his face, ready to work as a member of the St. Paul Regulars crew. 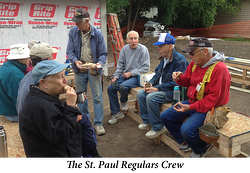 During a short morning break the eight crewmembers that were on site shared stories about their time working with Erv.

Erv’s younger brother, Bill said, “By the time I retired Erv had already been working on Habitat houses for a long time.” He continues, “The day after I retired 12 years ago, he called me and told me we were both going to work the next morning on a house. That’s how I got involved, and we’ve been doing it together ever since.”

Erv chimes in, “Somebody had to break ‘em in!” His toothy grin is infectious. “Rhonda (Thorson) was the first site supervisor I trained.”

“But not the last,” Dutton says.

Brother Bill adds, “But he didn’t break ‘em in on painting.”

Dutton laughs, “He won’t do painting because he says if his wife heard he knew how to paint she’d have him doing all sorts of projects.”

It’s Erv’s turn to laugh. “Way too many projects. I got enough to do here.”

Crewmember Everett Engebretson said, “Erv was our bathroom guy for a long time. He did a whale of job laying out vinyl floors, especially in bathrooms that were tricky to cut.” 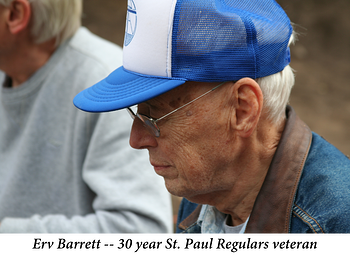 When asked how many houses he’s worked on Erv shakes his head, “I lost count. Probably somewhere around 200.”

“That includes the houses we did with A Brush With Kindness,” Jane Hladky says. “We used to go in every summer and get the houses all fixed up so they were ready to paint.”

“Tell him where else you’ve been with Habitat,” Bill says.

In his quiet voice, Erv answers, “Oh, El Salvador and down along the Gulf Coast.”

“He was down in El Salvador building homes for two weeks,” Bills adds. “How many times did you go down to the Gulf Coast after Katrina?”

Erv shrugs. “I don’t remember.” That response is typical of Erv. He was flattered by all the extra attention during the site visit, but was more interested in working than in talking about himself.

Prior to retiring, Erv ran the powerhouse at the Hamm’s brewery in St. Paul. That work seems a natural extension of his time in the Navy where he served as a boiler tender. “The Navy doesn’t run on boilers anymore,” Erv says. “I’ve been working with Habitat longer that I was with Hamm’s. I only worked there 28 years before I retired.

“Do you remember 15 years ago when Rosalyn Carter showed up at the house we were building?” a crewmember asks. Erv nods. The crewmember goes on, “My wife was visiting us on the site and she turned around to leave and standing right behind her was Rosalyn Carter, President Carter’s wife. It wasn’t a planned stop so there weren’t any reporters, just her Secret

service people. We snapped a picture of her with everyone and sent it to the President.”

“That was nice,” Erv remembers. “Just us and Mrs. Carter. No reporters. Oh, and her Secret Service agents.”

“Carter’s our hero,” says Dutton. Erv nods in agreement. “He’s done so much since he was President.” He looks over at Erv. “Hey Erv, tell ‘em about when you went swimming in creosote.”

Erv laughs. “When I was 16 I worked for the Northern Pacific railroad laying train tracks. One day is really hot out and there was a pond near the tracks when we took our lunch break. The foreman said we could go swimming to cool off.” 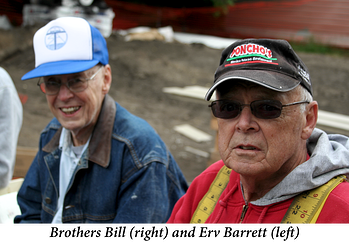 Brother bill chimes in, “The were laying creosoted ties and decided they could use ‘em to float on, so Erv and the other boys dragged some ties into the water and used ‘em as floats.”

“Nobody told the boys that creosote was flammable and would rub off all over them,” Dutton says. “They got covered head to foot in black creosote.”

“He didn’t want anybody with a match around him for the rest of the week!” Erv’s brother says, laughing. “How’d you get that creosote off you?”

Erv shrugs, “We didn’t get it off. We just had to sort of grow out of it for a few weeks.”

Erv’s long history with Twin Cities Habitat for Humanity is a reflection of his work as a Catholic Deacon, where he helped couples and people in trouble or struggling. Both are indicative of his lifelong commitment to helping lift people up.

“Ever since I was a boy, he’s been out there helping people,” his brother says. “That’s how he got me working here.”

Erv finishes his cup of coffee and stands, ending the history lesson. “Time to get back to work.”

“Green side up,” someone says. Everyone on the team laughs.

“As long as someone yelled, ‘Green side up’, once in a while,” Bill said. 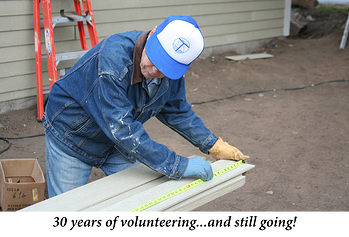 Erv laughs, “That’s right. I just need reminding once in a while.”

Finishing each other’s sentences and shared jokes is indicative of the St. Paul Regulars. As Erv and Jane return to putting up siding, and other crewmembers return to their pre-break tasks, it’s clear they work together with the comfort and camaraderie that comes with shared experience. Some of the regulars have only been with the crew for a couple of years, and others, like Erv, have been there much longer, but all are comfortable working together. It seems like enjoying each other’s company is almost as big a part of being a crewmember as the homes they build.

As Erv and Jane use a spacing jig to insure proper spacing of the siding, someone yells, “Green side up,” to Erv.

“Got it,” he says, as everyone on the crew dives back into their day’s work.

THANK YOU TO ALL THE ST. PAUL REGULARS

It would be impossible to say thank you to our regular crewmembers enough. Without them Twin Cities Habitat for Humanity would not be able to serve as many people as we do, or serve them nearly so well. We'd like to recognize the contributions of all the St. Paul Regulars crewmembers: