Act! Speak! Build! Week at the University of Minnesota

By Daniel Chang
Habitat for Humanity at the University of Minnesota

Act! Speak! Build! Week is one of the biggest weeks of the year for our chapter at the University of Minnesota. We organize all kinds of events including a build, a ticket fundraiser to see a Minnesota Twins game, and a campus-wide 5K! Our aim is to create awareness of homelessness in Minnesota and give students the opportunity to support affordable housing in fun and exciting ways! Our chapter was even recognized by the national ASBW with our Luminaria pictures, and on the Habitat Youth Leadership Conference page for our build with Representative Kahn! Here is a breakdown of the week:

We kicked off ASBW in signature Habitat fashion: a build! We sent five volunteers to help rehabilitate a house for a family with 5 children in Brooklyn Park, and had the privilege of working with Representative Phyllis Kahn who assisted us with the build! The volunteers installed a sliding patio door and laminated flooring, as well as making finishing touches to the house’s lower level and bedrooms. We also played a bit of Advocacy Jeopardy during lunch, and Representative Kahn’s team came out on top! As one of the volunteers later said, “Representative Kahn was super fun to build with and is all for affordable housing!” 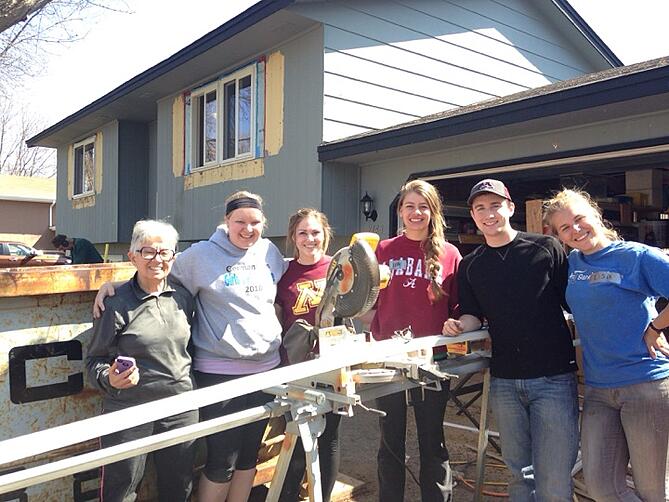 On Monday, we set up our What Is Home? display in front of Northrop Auditorium, asking students what home meant to them. We received all kinds of responses such as “Family,” “Comfort,” and “Security.” They also filled out cards petitioning the legislatures throughout Minnesota to provide $19.5 million for the Minnesota Housing Finance Agency, and an additional $19.5 million for the Department of Human Services. 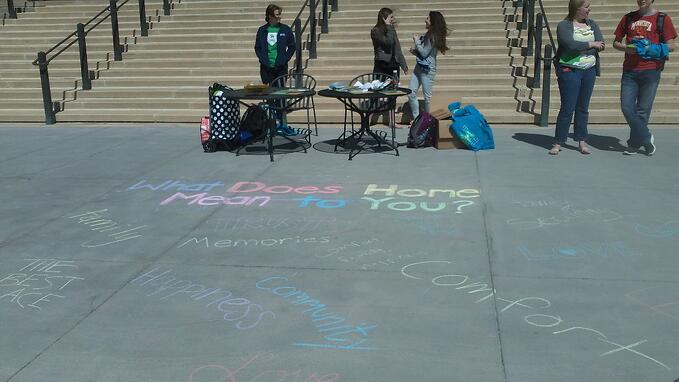 Today, we set up our Luminaria display consisting of 1,100 lit candles! Each candle was representative of 10 people, corresponding to the 11,000 Minnesotans who go homeless on a given night. 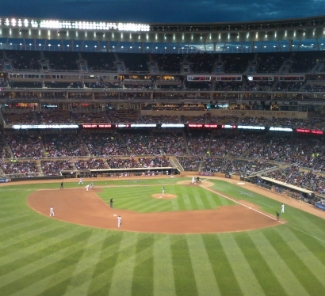 We sold baseball tickets to 325 University students going to the Twins vs. Royals game this evening, while raising $650 for our chapter! The students were able to walk on the field before the game started, and were recognized for over 3,000 hours of cumulative volunteering this past semester! The Twins capped off the night by beating the previously undefeated Royals 3-1 in front of a home crowd of 21,362 fans!

Thursday we had our Advocacy Dinner in TCF Bank Stadium’s M Club Room! After a wonderful dinner, we heard insightful talks from Rebecca, an advocate working for Twin Cities Habitat for Humanity, and Sarah, a current owner of a house provided by Habitat.

Rebecca spoke about the importance of advocacy, which is essential to spurring the state government to create funds and policies that can provide Minnesotan families with affordable homes. She also applauded the University of Minnesota as a key force for advocacy. Last year, students living in-state who were prompted to ask for increased funding towards affordable housing were able to reach 89% of state legislatures! She closed by calling for continued vigilance and awareness of the issue of affordable housing at the state level. 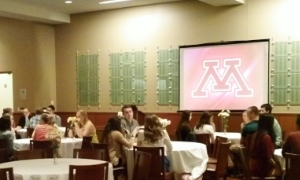 Next, we heard from Sarah, who currently has been living for over a year in a home designed by University of Minnesota architecture students! Owning her own house was an important goal for Sarah, who is now the first of her siblings to do so. She affirmed the important benefits of homeownership, saying, “By being in this house, I have stability for me and my children.” She no longer needs to worry about constantly moving from one house to another, and has been able to achieve additional success in other areas of her life – she will complete her associate’s degree as a dental assistant next year! She finished by stressing the importance of continue advocacy and the fact that our efforts can and will make “a huge difference to these legislatures!” 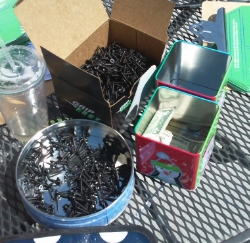 Friday found us back outside Northrop on a beautiful afternoon! We sold nails and invited passersby to write an encouraging message to new Habitat homeowners, giving out even more t-shirts and beach balls in the process!

Our last day of Act! Speak Build! Week! To capitalize the week we hosted a Pi Mile Run with engineering honor society Tau Beta Pi! We had 85 runners participate and raised $2,500 for our chapter! There were awesome prizes including gift cards to Al’s Breakfast and Punch Pizza, t-shirts, and more than enough pie for everyone who participated! 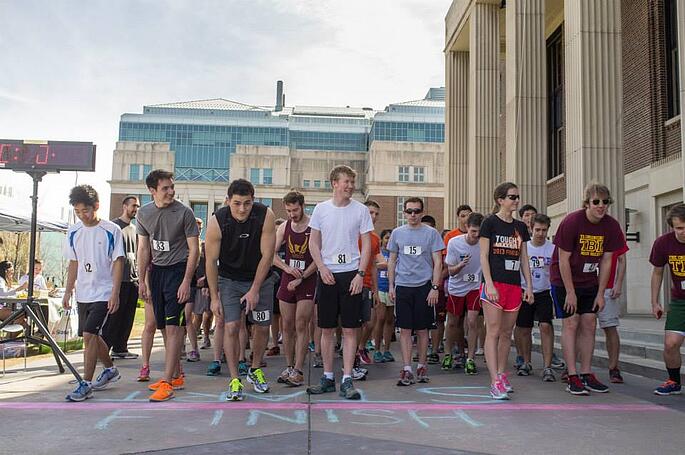 Act! Speak! Build! Week was a huge success for us! Huge thank you to Representative Kahn, Rebecca and Sarah at our Advocacy Dinner, our hard-working Habitat members, and of course all of the students at the U of M for helping us out! 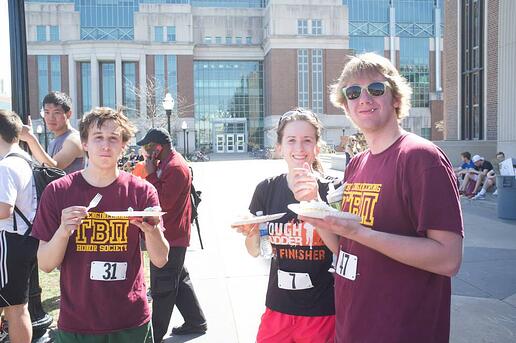 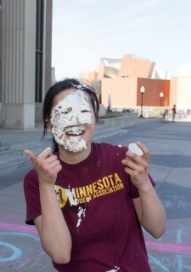