If you ask a 3Mgives Habitat Project member what they’re most proud of, the answer may come as a surprise:

To understand that statement, you’ll have to go back a few years, to 2010, when Habitat began round two of its work in the new Garden Gate development in Woodbury. At that time, just one bus, half the size of a standard bus, was all that was needed to pick up children in the neighborhood. Now, as the 3Mgives Habitat Project closes in on finishing its 24th Habitat Garden Gate home (34 Habitat units have been built in the neighborhood since 2005), two full-size buses pick up kids by the build site each day. 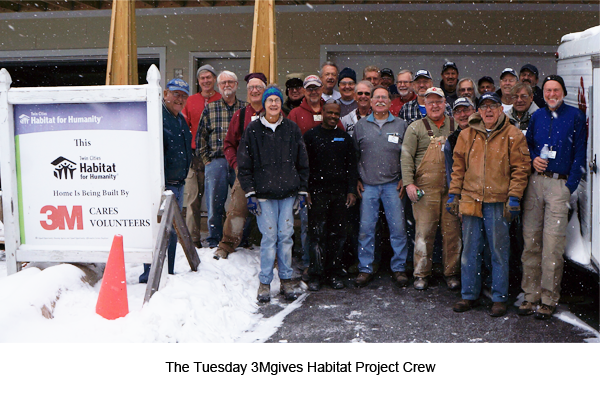 The 3Mgives Habitat Project team continues to work on Tuesdays and Thursdays year-round, and is finishing up its 19th year in partnership with Habitat. Dan Shapiro, a current Twin Cities Habitat for Humanity Board Member and a 3Mgives Habitat Project member started volunteering with Habitat as a 3M employee 2002. He originally heard about a group of 3M retirees who regularly volunteered with Habitat, and he decided to take advantage of his company’s community service opportunities. After working alongside the retirees, Dan pulled together a group of employees and brought them to the build site as part of a teambuilding exercise.

“I am fortunate to have worked for a terrific company (3M) for almost 32 years,” Dan said. “A company with a culture that not only tolerated – but actively encouraged and supported community service and volunteer efforts by its employees. That corporate culture of valuing and supporting community volunteer efforts continues to this day.”

Dan retired from 3M as Assistant General Counsel and General Counsel to 3M’s Healthcare Business in November of 2009, and two weeks later joined the 3Mgives Habitat Project. As part of the crew, Dan regularly builds on Tuesdays and Thursdays, and, like other 3Mgives Habitat Project members, volunteers up to five days a week during the summer months. 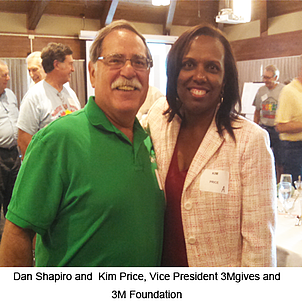 “I knew almost nothing about construction when I first started,” Dan shared. “This group has been wonderful in terms of teaching me about building houses. I honestly couldn’t talk about my experiences with Habitat without talking about the wonderful 3M crew and the experienced Habitat construction leaders. I feel very fortunate to be able to work with these people on a regular basis.”

Dan recently received an award from 3Mgives, recognizing the top thirty 3M volunteers from around the world that are honored for improving lives in their communities. This is the first year that the 3Mgives Volunteer award was based on global nominations and Dan’s award recognizes his Habitat and other volunteer activities.

“Every time I attend a Habitat event, or show up at the 3Mgives Habitat Project, I see Dan there with a smile on his face.  He builds, advocates, engages others, and leads by example.  This 3Mgives Global Award is definitely deserved!” said Anne Thul, Habitat’s Manager of Constituent and Volunteer Programs.

Like many other crew members, Dan believes in supporting Habitat, not only through volunteer service, but also through financial contributions, attending events and helping out in any way that he can.

“I think Habitat does a lot of good things for the right reasons,” Dan shared. “The homes they provide are not a hand-out, but rather a leg up. The stable homes they build provide a level playing field for low-income communities and give people the opportunity to succeed and improve their lives and their families’ lives, creating stronger communities for us all. That's part of the terrific work that Twin Cities Habitat for Humanity does every day and it’s why I am so proud to work with this organization. And the Habitat relationship with 3M puts two wonderful, powerful brands together.”

Dan plans to continue his work with Habitat, and looks forward to the days when current 3M employees join the regular retiree crew on site. 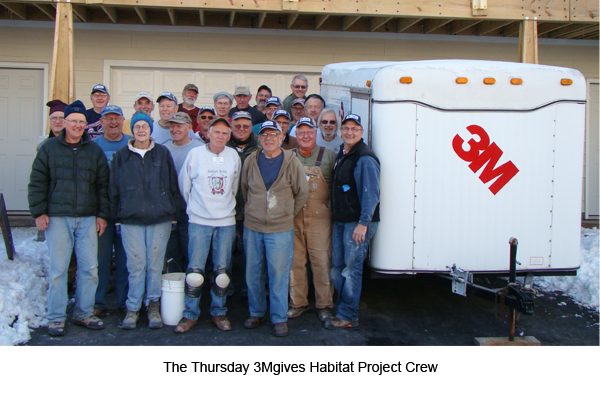 “I love working with 3M employees and with homeowner families on site,” Dan said. “It’s fun to show the homeowners how to do things they’ve never done before, and at the same time be able to support Twin Cities Habitat, an organization that’s second-to-none.”

In addition to his work with Habitat, Dan is also involved with Mounds Park Academy, the Volunteer Lawyers Network and Breakthrough Twin Cities.

Lou Cristan,Director, 3Mgives Habitat Project, submitted Dan’s nomination for the 3M Gives Global Volunteer award, stating that "Dan puts on the tool belt 2 days per week joining other 3Mgives Habitat Project volunteers in all aspects of building homes. He signs up for all manner of tasks, taking direction where needed, willing to learn and always remains one of the most social and friendly volunteers on the site. He is a great example of volunteerism in action and a great person to be around."