Posted by matt haugen on 1:00 PM on October 30, 2015
Historically, Minnesota’s best business leaders have been able to look beyond their company’s bottom line and ask themselves: How do we strengthen our entire region for the future? This collective foresight has resulted in a great standard of living in the state and a long tradition of corporate and individual philanthropy.

This tradition grows at Twin Cities Habitat each year with the annual CEO Build held in October. In 2015, top executives from 16 Minnesota-based businesses and institutions took part in the 14th CEO Build at two construction sites in the Jordan Neighborhood of North Minneapolis.

The day of volunteering provides top business leaders with a chance to connect with each other, while doing something completely out of their normal routines. They also left the day with a greater understanding of how Habitat is working to address the issue of affordable homeownership in the Twin Cities.

On one of the construction sites that day the executives were installing wood sheeting on the roof to get it ready for shingles. Members of the families buying the homes were putting in sweat equity hours as volunteers alongside the corporate leaders.

A family of seven will be buying the 4-bedroom home that was having the roof put on. They'll have a mortgage that’ll be structured so that the payments are affordable. Each family’s monthly mortgage payment to Habitat helps pay for more homes to be built and sold in the future. 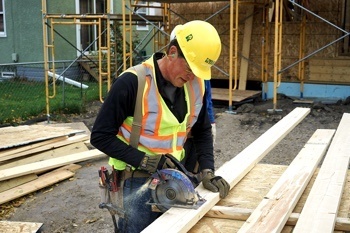 Along with mortgages that are affordable, another key to Habitat’s long-term success are the homebuyer training classes required of every family before they close on their home. The classes teach first-time homebuyers about financial literacy, insurance, maintenance, upkeep, and building good relationships with your neighbors. It’s a formula that’s resulted in more than 1,000 families having purchased Twin Cities Habitat homes since 1985.

Several of the companies represented by their top executives at the 2015 CEO Build have a long history of sponsoring and building Habitat homes. Others are just getting involved with Habitat for the first time. During the lunch program, this year’s CEO Build co-chairs Mike Klingensmith, Publisher and CEO at the Star Tribune, and Dave Kvamme, Wells Fargo Minnesota CEO, spoke to the volunteers about how they see their companies’ goals aligning with those of Twin Cities Habitat. 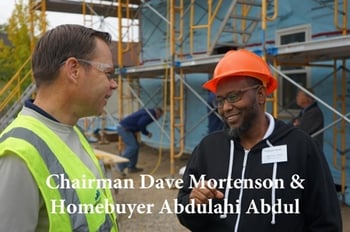 Klingensmith said the Star Tribune is dedicated to creating a more-informed and better-connected community, and that’s why every new Habitat homebuyer family will be given a free subscription to the printed Star Tribune and all its digital content.

Kvamme talked about the importance of investing in neighborhoods and working to close opportunity gaps. The Wells Fargo Housing Foundation has donated more than $150 million dollars to support Habitat for Humanity around the country since 1993. Both Klingensmith and Kvamme urged the other executives to look at ways to get their companies more involved with Twin Cities Habitat.

Minneapolis Mayor Betsy Hodges also spoke during lunch and thanked the executives for supporting Habitat’s mission to eliminate poverty housing in the Twin Cities. “We are fortunate to have a culture of giving in our community. Seeing you here today, working so hard to help families get affordable homes, demonstrates what can happen when the private sector, government, and nonprofits work together to make the community a better place for everyone.”

Corporate responsibility, community engagement, and leadership by example are always on display at CEO Build. Thank you to all those who were involved in 2015: