Something remarkable happened this past Wednesday, October 22nd. More than 260 women, and 3 men, gathered for the Hearth & Hope luncheon to support Twin Cities Habitat for Humanity and to hear a keynote speech by Marilyn Carlson Nelson. The luncheon raised nearly $70,000 for affordable housing that will empower women in our community and improve the lives of their families and children. The amount raised was important, but the remarkable part of the day came in the fact that so many women gathered and acknowledged the power they wield to make a difference in the lives of so many families.

Before the keynote, the audience heard from Kate Fay, a single mother and Habitat Homeowner in St. Paul. Kate spoke about the empowering affect homeownership is having in her life. Before buying with Habitat, she was living in a one-bedroom apartment in Minneapolis, paying more and more rent, and feeling trapped in an area infested with gang activity, sex trafficking, and violence. When she was nine months pregnant, Kate was shot in the leg, an innocent bystander in a drive by shooting. The incident made Kate determined to give her daughter, Sewmauria, a safe, stable home, but didn’t know how to do it. Not long afterward, a friend suggested she apply to Twin Cities Habitat for Humanity. Kate applied and was accepted, she and Sewmauria moved into their Habitat home four years ago. Today, Kate is employed with The Family Partnership, helping teenagers make the right decisions in their lives so they can be successful. As Kate spoke about her daughter, her crazy dog, and owning her own washer and dryer, it was clear that the women in the audience understood and connected with her story. 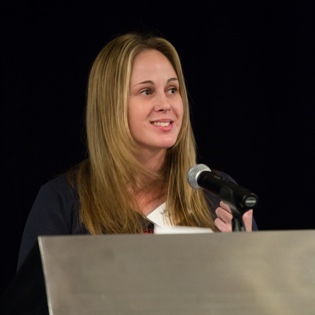 Marilyn Carlson Nelson followed Kate with a heartfelt, authentic, message, full of the kind of energy that can invigorate a packed ballroom. We all got to see, firsthand, the vision that served Marilyn so well when she led Carlson Inc, one of the largest travel and hospitality companies in the world. It continues to enable Marilyn to have a huge impact on those around her, including sharing a passion for Habitat for Humanity.

“We must empower women,” Marilyn said, as she quoted statements from the United Nations and the Clinton Global Initiative. “When we empower women economically and politically, we elevate every critical measurement of well-being in our society.” She went on, “Communities where women are able to participate economically and politically, and own homes, are healthier, better educated, less corrupt, and more stable.” She told the audience that Habitat for Humanity was a major facilitator of women’s engagement in our community. She said it frees women, like Kate, to focus on being good parents, better providers, and on being good citizens in making our communities better places to live.

Unlike speakers who stick strictly to prepared text, Marilyn spoke from the heart. She told the story of her daughter Juliet, who was killed in a car crash shortly after starting college. She tied that story to one about recreating the nativity as part of her family’s Christmas celebration, and bringing the tradition to her church. And she talked about the beauty she’d experienced on the way to the event. She quoted a poem by Wordsworth to express her joy at the day, “Oh Lord, you’ve made the world too beautiful this year.”

She tied those observations together when she spoke about how the seasons speak to us. How darkness can turn to light. How moments of trauma turn to positive steps to the next chapters in our lives. She talked about walking and watching nature prepare for the scarcity of winter, and the knowledge that no matter what, the “frigid dark winter is going to give way to spring. And then we’ll see wondrous sights again,” like tender tulip shoots and birds building their nests. 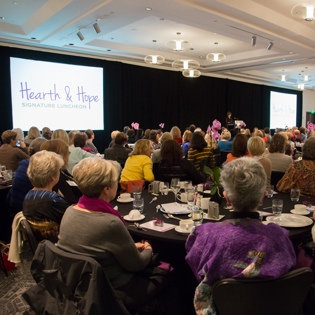 Marilyn came back to Habitat with her reference to nests as, “a safe place to birth, and raise their offspring, and then give them wings.” She told the audience, “That’s what Habitat for Humanity does, it enables nest building.” She added, “Women are natural nest-builders, so I’m not surprised by today’s outpouring of support for Habitat.”

She seemed delighted that almost 270 people had shown up to support the Hearth & Hope luncheon in only its second year. “We’re going to have to build another hotel with a bigger ballroom,” she said, to the delight of the audience. Then she added that she wasn’t surprised, and said, “If women don’t understand this mission, who will?”

In acknowledging those in attendance, she also said she believed that the women of Hearth & Hope were absolutely critical to expanding the impact of Twin Cities Habitat in the community. She said cross-sector partnerships between business, government, and nonprofit organizations, are more important than ever. “Not one of these sectors can possibly solve the problems facing us alone. The problems are just too great.”

Poverty, she said, is certainly one of the areas that cannot be solved without those partnerships. And homeownership is one of the keys to solving generational poverty. “Only by working together at citizens, professionals, and government, can we do what no one of us can do alone.”

Marilyn talked about the opportunity businesses have to align themselves with Habitat's work. She referenced Carlson as an example. She said Carlson was “very proud to count itself as a business partner with Habitat for Humanity.” She said Habitat was a natural fit for the company. Carlson has a years-long commitment to helping children at risk close the education gap, sponsoring mentoring programs for children, protecting children from exploitation and sex trafficking. When she said, “We cannot tolerate neighborhoods where we can get shot, or where sex trafficking takes place,” she got the loudest, most heartfelt applause of the day. She’d touched the hearts of everyone in the room.

“Habitat’s work is consistent with these efforts,” Marilyn said. “But Carlson is in the hospitality business. We provide a home away from home and Habitat provides a permanent home.”

Finally, Marilyn shared a secret about her experience actually participating in a Habitat home build. “I’m good with siding,” she said. She remembered the deep satisfaction she felt when she was there the day the new homeowners were given the keys to the house she had helped side. “As a mom, and a women, and as a business person, Habitat is a natural fit.” She said partnering with Habitat was a gift, not just to the new homeowners, “but to each of us personally, and to the future of our communities.”

“Habitat has been key to Carlson living its values,” she said. “That’s why we’re here today. Contributing in this way is a key to each of us living our values.”

Marilyn called on those in attendance, when they used their keys to unlock their homes when they got home, to let it serve as a reminder of “how blessed we are, each of us, to have our own shelter, to have our own home, to have our roots that provide a stable grounding for our families.” She told them to remember that when they walked through their front doors to remember the 2,500 families in the Twin Cities who were able to walk through front doors, into their own homes because Habitat had been there for them. And more will be able to have the keys to their own homes because “we, the nest builders, came together today.”