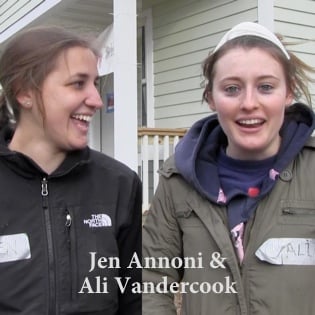 Jen Annoni and Ali Vandercook didn’t fit the rest of the volunteer crew they were working with on a house build in Crystal. They had volunteered to spend another day working on a Habitat house and, since they were not members of a larger group, they’d  been assigned to work with a group from seven West Metro Episcopal Churches that called themselves EpiscoBuilders. Jen and Ali were in their early twenties, the others were all in their fifties, sixties and seventies. In addition, the only other woman on the site was McKinsie Clyde, the Habitat site supervisor.

This dynamic pair may have been from a different demographic from the other volunteers, but they quickly became part of the team. “These guys are great,” Annoni said. “They made us feel totally welcome.” The easy joking and quick smiles between everyone there, including these two newbies to the crew, made it clear this was a group that enjoyed each other’s company.

When I asked Jen and Ali why they were there, they said that they were frustrated with the way things were, and decided the best way to change things was to actually step up and do something concrete. They’d done “random volunteering” before, but they had both decided to make volunteering with Habitat part of their regular community service routine.

“Volunteering is hard,” said Annoni. “There’s always an excuse for not doing it.” She added, “My favorite thing is how it makes me feels, that’s why I want to keep coming back.”

Vandercook noted the pair wanted to expand their network of friends and connections, and that working  with Habitat was a good way to do it. She said, “It’s a great way to bond with your friends,” and added, “It’s also a good workout.”

They spent most of the morning working alongside Chip Whitacre, a retired Medtronic executive, and an ordained Deacon serving at Trinity Episcopal Church in Excelsior. “I have to work hard to keep up with these two,” he said, “but that makes the day even better.”

The women were quick to add that they were glad to have so many on the crew who were experienced builder. “If we don't know how to do something, they step up and teach us. It’s great,” said Annoni. “I’m having a great time!”

Vandercook summed it all up three simple words, “Just do it!”

The pair assured me they’d be back again, and again, to keep doing it. Learn how you can, too.