Joyful Home Dedication for A Grandma and her Grandson 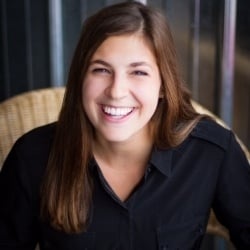 Starting a new life in a new place is both exciting and nerve-wracking. And on Thursday night, Woynshet and her grandson were ready to take that step into homeownership—surrounded by those who support them!

There were many friendly faces at the home dedication of Woynshet and her grandson, Kidus. Susie DeShon, a dedications committee member, welcomed the crowd:

“We are all here celebrating a house becoming a home. I get to be a part of these phenomenal gratitude celebrations- and look who’s celebrating!” Susie motioned to Woynshet’s granddaughter dancing around in the empty living room space. We all let out a laugh, agreeing that the granddaughter's joy was a shared emotion in the room. 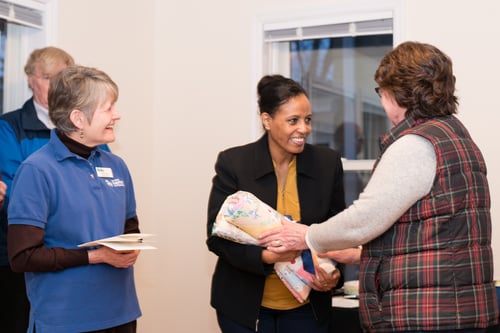 The house is a beautiful three-bedroom home that will most likely be used for lots of family gatherings. Melissa, a Habitat Site Supervisor said, “We did this house in nine weeks—which speaks to the volunteers that helped. They want to work and believe in the mission.”

Sue Lyons, a member from one of the volunteer groups, Interfaith Builders, was so proud of the work that was done with the home. “We’ve helped with Habitat Homes for 16 years. Building a house lifts our spirits. We were lucky enough to work two weeks on the house.”

The volunteers not only put two weeks of challenging work into the home, but they also left their names in the basement on a piece of plywood, which Woynshet and her family find incredibly cool.

Woynshet is excited to move in for many reasons, but she is especially looking forward to meeting her neighbors and being part of the community. Cristen Incitti, Senior Director of Family and Com 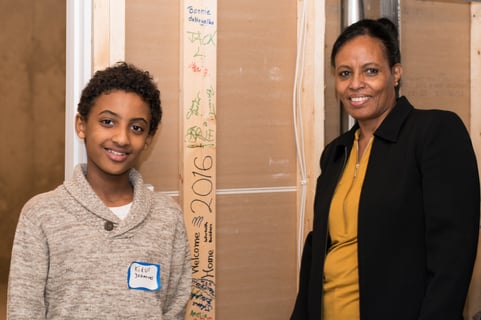 munity Programs, shared that the neighborhood is filled with Habitat homeowners who would love to meet Woynshet and Kidus. “This community here is really a special one for Habitat.”

As Kidus made his way to the living room to join the circle, Woynshet put her arm around him and said , “Thank you to everyone involved. I am so happy. Thank you so much.”

The major sponsor for the new home is Thrivent Financial. Nikki Sorum, a Thrivent representative, welcomed Kidus to the circle. Nikki said that when she was touring the upstairs, she found Kidus looking at the bedrooms. When asked if he was picking out his own, Kidus responded that he was looking at rooms for his grandma, because she needs the best room.

As the ceremony was coming to an end, Nikki turned to Kidus and said, “Will you help me dedicate this home?” With a large smile, Kidus nodded.

It was a beautiful celebration with kind words, warm hearts, and giant smiles. Woynshet and her family shared delicious Ethiopian food with friends, volunteers, and supporters.

We wish the best for Woynshet and Kidus. May they find happiness in their new home!