When the housing market collapsed, entire neighborhoods of North Minneapolis could have been re-classified as financial crime scenes. To get an idea of the scope of the mortgage maleficence perpetrated check out Jeff Skrenes’ list of all the fraud prosecutions on his North by Northside blog. The greed that had overtaken people during the housing bubble left city blocks scarred with homes abandoned and falling into disrepair.

For the staff of Twin Cities Habitat for Humanity (and lots of other people), this was very tough to see. Twin Cities Habitat has a long, and strong, relationship with Northside families. Over the years, more than 170 families have purchased a home in North Minneapolis with our help. Habitat crews have completed more than 450 home repair projects in partnership with Northside families through our A Brush With Kindness program. At the bottom of the housing collapse, Twin Cities Habitat’s Mortgage Foreclosure Prevention Program was working with hundreds of families a year to try and help them adjust their mortgage into something they could afford.

In the late 2000s, Twin Cities Habitat connected with Northside groups and community leaders and decided to launch a neighborhood revitalization effort. Our approach relies heavily on residents’ input and community partnerships. In the Jordan neighborhood, we’re working closely with groups like the Jordan Area Community Council, Project for Pride in Living, PRG and the Northside Home Fund (plus many others). The idea is to focus Habitat homebuilding and repair work on some of the most economically disadvantaged blocks and, by stabilizing them, help the entire neighborhood grow stronger. 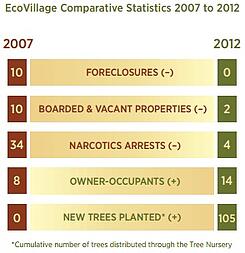 Hundreds of thousands of dollars invested and thousands of volunteer days later, we are seeing more and more signs that this community is rebounding. One of the first indicators was a report on five years of progress in the Hawthorne EcoVillage. It showed homeownership was rising, and both foreclosures and crime were dropping. In addition, more than a hundred trees had been planted to help beautify the area. Habitat’s involvement in the EcoVillage was one piece of Minneapolis’ ambitious Green Homes North Initiative, which hopes to build 100 green homes on the Northside.

Twin Cities Habitat prides itself on building green, because affordability for a family means not having to pay outrageous energy bills, so every new home we build is designed to meet the LEED Silver standard for eco-friendliness. In Hawthorne, we took one project even further and built our first ever net-zero energy home (pictured below with the solar panels on it). 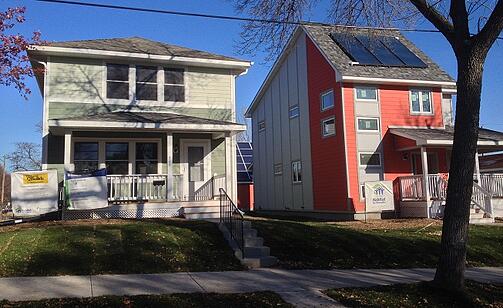 Recently, the Star Tribune picked up on another positive Northside story – the rising property values. Homes are selling on the open market and families are gaining back some of the equity lost when prices collapsed. However, there’s still a long way to go.

Unfortunately, the housing market collapse of the 2000’s was nothing new for North Minneapolis. These neighborhoods have been the target of bad housing policies and practices since the early 20th century. A hundred years ago the neighborhood began down a path of racial segregation – as it was one of the only safe places in Minneapolis for families of color and Jewish residents to live. At that point, city leaders decided to concentrate public housing in North Minneapolis. Then, in the 1930s, the Federal Government created maps meant to guide lending institutions on where it was “best” and where it was “hazardous” to make home mortgage loans. They marked parts of North Minneapolis, the Phillips neighborhood on the Southside, and St. Paul’s Midway neighborhoods with that hazardous rating. This label foreshadowed decades of disinvestment in these neighborhoods and the results are still shaping our cities today.

We at Twin Cities Habitat are delighted to see North Minneapolis growing stronger. Our construction plans call for six new Habitat homes to be built in the Northside's Jordan Neighborhood over the next two years. We hope the families that buy these homes will add even more to the recovery going on in the area.