An Original Habitat Story of Love and Faith

Roger and Vicki Henry are an energetic, passionate, and loving couple and self-proclaimed “Habi-holics.” They have been involved with Twin Cities Habitat for Humanity (TCHFH) since the organization’s early years, and continue to be among the organization’s most dedicated and passionate supporters. 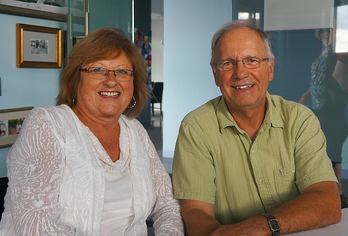 Roger Henry originally became interested in working with Habitat for Humanity (HFH) in 1989 after purchasing an old house on Lincoln Avenue in St. Paul, MN. Habitat volunteers were working to restore and repair old homes in his neighborhood, and this piqued Henry’s interest.

“My dad instilled a passion in me for renovating old homes,” Henry shared. “I didn’t know much about Habitat at the time, but I sure learned!”

Roger also got involved volunteering with others in his Fairmount Avenue United Methodist St. Paul congregation. Like many of our faith partners, Habitat is driven to serve families in need with generosity, humility, and love, and encourages people of all faith backgrounds and beliefs to join us in our common goal of eliminating poverty housing.

Vicki Henry’s connection to Habitat began for very different reasons. She was working on obtaining her degree at the University of Minnesota, and was required to do a leadership project to achieve an A in one of her courses. Vicki immediately contacted her pastor at St. Andrew’s Lutheran Church in Mahtomedi, MN, who readily provided a list of ways that she could provide leadership for the church to reach out to the local community. The opportunities at Twin Cities Habitat caught Vicki’s attention, and she threw herself into creating a plan to get her church involved in Habitat’s mission.

“I was eager to get things organized and asked a lot of questions,” said Vicki. “That’s when I found out about the fundraiser walk.”

That 1992 Habitat fundraiser walk at Powderhorn Park in Minneapolis is where Roger and Vicki first met.

“We ended up walking in the same pack,” Vicki recalled. “I started talking with people and asking more questions and Roger happened to be one of those people. We had a lot in common and we both were involved through our churches.”

Through what some may call fate, the following Monday Vicki was contacted by the HFH coordinator at Fairmount Methodist, who notified her that TCHFH assigned her to speak at the first St. Andrew’s Habitat orientation/information meeting. Vicki mentioned meeting Roger at the event over the weekend and the coordinator decided to bring him along to the orientation session! 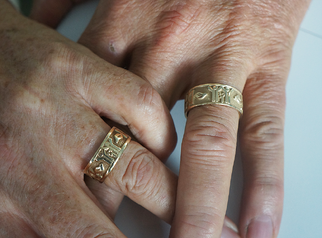 St. Andrew’s Church sponsored its first week in 1993, and Roger and Vicki regularly connected on-site; Vicki volunteering with her church, and Roger as a local neighborhood volunteer. Their relationship grew, and they eventually married on July 2, 1994. They even had the Twin Cities Habitat logo incorporated into the design of their wedding rings!

Throughout their marriage, Vicki and Roger have continued to be actively engaged with Twin Cities Habitat. Both of them volunteer through St. Andrew’s Church and the 3Mgives HFH project , and are involved with the St. Andrew’s Regular Volunteer Crew that helps build year-round. The couple also served as a Neighborhood Family Partner for a few Habitat families, in 1993, 2013 and currently in 2014.

“Our 2013 family calls us their ‘American grandparents’,” Vicki laughed. The Henrys have continued their relationship with the family as friends even after their role as Family Partner ended.

In addition to their work through their church and with partner families, the Henrys attend Habitat events and have volunteered with Habitat in Jamaica and on a Costa Rica Global Village Trip. Roger also serves on Habitat’s Faith Advisory Committee. 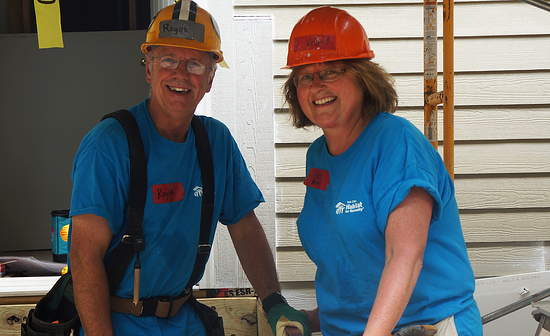 “One of the aspects [of Habitat] that has always impressed me is how people from so many different backgrounds and skill levels can show up on–site and get so much done in one day,” Roger shared. “Part of the satisfaction for me is when somebody walks away from a build and says, ‘I’ve never done that before, and now I know how to do it!’”

The couple also make a point to regularly support Habitat through current donations and have included Habitat for Humanity in their will.

“I’ve learned that there’s a great need for affordable housing,” Vicki said. “I’ve also learned that you always receive more blessings when you serve and give. I enjoy the sound of hammers pounding nails, and love the idea of the Habitat homeowners putting in sweat equity as their down payment and knowing that I’m serving a much bigger purpose.  It’s amazing that what started out as a college project has led to St. Andrew’s becoming one of the leading churches to partner with Habitat for Humanity.”

After celebrating their 20th anniversary earlier this month, Roger and Vicki are choosing which Global Village Trip they will sign up for–their next big adventure.

It is because of supporters like the Henrys that Twin Cities Habitat is able to build roughly 50-60 homes, repair 140 homes, and serve and educate 1,200 local families each year.