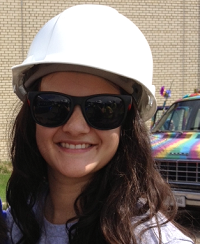 On October 3rd, Habitat in partnership with Frogtown Neighborhood Association, Veteran’s Voices, and Frogtown Rondo Home Fund and with funding through Thrivent Financial, will be hosting the first ever hosting the first ever Garage-A-Palooza. In the Frogtown neighborhood of St. Paul, we will be painting and repairing 6 garages all in one day while also hosting a neighborhood clean-up. In addition, a community celebration with a brief kickoff program, food, music, and fun community events will take place.

In 2011, at the request of Frogtown residents, Twin Cities Habitat joined Frogtown Focus, a community

effort to improve a 16-block section of the neighborhood. In the wake of the housing crisis and in anticipation of the light rail Green Line, residents wanted a coordinated housing plan among developers. On top of committing to doing what it does well (building, rehabbing, and repairing homes), Twin Cities Habitat launched Neighborhood Revitalization work to improve the overall quality of life in Frogtown.

To measure the impact of this approach, Twin Cities Habitat conducted evaluations comparing neighborhood conditions in June 2011 and 2012 to those in June 2014. The findings revealed that paint is the most common repair need in Frogtown. Also, safety is noted as a top concern of residents.

Garage-a-Palooza is a collaborative response to address the community’s concerns. For this reason, we will be repairing and painting 6 garages at Garage-a-Palooza and later installing motion detector lights for additional security. 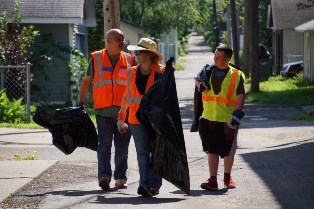 On June 27, Twin Cities Habitat, Frogtown Neighborhood Association, Frogtown Rondo Homefund, and Thrivent held a block-wide clean up in Frogtown. This event was in response to community members’ concerns about trash and litter in their alleys and streets. More than fifty people volunteered to help, including families, veterans, students, and members from the Frogtown neighborhood.

This is an incredible opportunity to build on the work done already by you and so many other volunteers, neighbors, students, veterans, and partner families in Frogtown!

We are still looking for volunteers to help paint garages! Sign up here.