JCRC: Repairing the World One Habitat House at a Time

A Day in the Life of the JCRC Regular Crew

I was charmed by my day out on site with the JCRC regular crew. I joined them out on David Michaelson’s site in Brooklyn Park. It had been a while since I’d worked with volunteers regularly and I was excited for the opportunity to get to know someone while working with them. I was also a little nervous. What if they didn’t like me or all of my questions? What if they proved reticent and didn’t answer anything? What if I had forgotten everything I learned when I worked out on site all of last year? I soon learned that there was no need to worry. 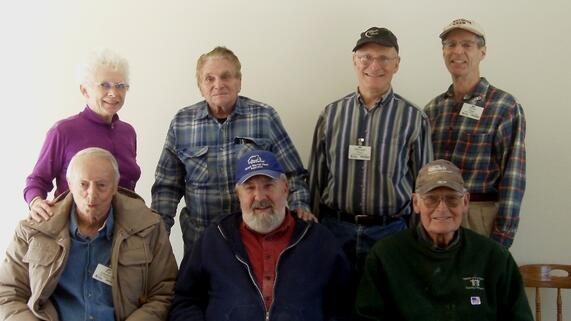 As soon as the site supervisor had explained all the tasks for the day, youthfully energetic Colette (Sulser) with a shock of white hair collected me immediately with, “Now, would you like to lay flooring with Mike and me?” Colette has been a part of the crew for about seven years. She and Mike (Frisch) have become professionals at laying laminate flooring over the years. Of all the other tasks on a job site, Collette said that laying laminate was their favorite to do. Mike is now the current leader for their small group, organizing them to volunteer about once a week all around the metro area. He calls everyone to let them know where their next job assignment will be. While the crew I worked with installed laminate upstairs, Stan Alexander and Bob Howard installed a window and Chris Page installed base shoe moulding and Tom Goodoien installed window moulding. Throughout the morning the whole crew worked together efficiently, which is not a wonder considering how long they’ve all worked together. 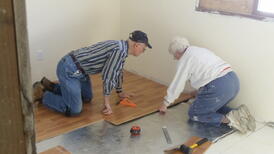 The real excitement of the day was a visit from Pat Eckelberry. Pat, along with Stan Alexander, was one of the founding members of the crew. The acronym of their crew name—JCRC - stands for the Jewish Community Relations Council. JCRC is also a larger network of individuals of Jewish faith traditions focused on public affairs and social justice work. The work of the crew members is a strong example of the Jewish ethic of “tikkun olam,” which is Hebrew for “repairing the world”.

I expected most of the crew members—or at least the founding crew members—to be Jewish. While members of Beth El Synagogue, Bet Shalom Synagogue, and Adath Jeshurun Congregation are represented, founding members Pat and Colette represent St. Bartholomew's Catholic Faith Community in Wayzata. Stan Alexander has been volunteering with his synagogue for 25 years. Seven years ago his synagogue, Bet Shalom, along with the Jewish Community Relations Council invited more groups to join them in their volunteer efforts. Stan clarified about the name for his small and connected group, “It’s not about just being Jewish—it’s about community.” 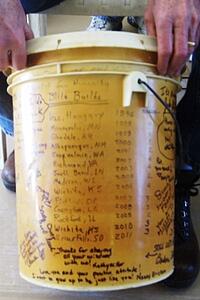 Due to a back injury from playing tennis two years ago, Pat has been unable to volunteer since. When he did volunteer he volunteered all over the country and the world before he settled down into the quieter routine of the regular crew in the twin cities. Pat brought in his tool bucket that he has had since his first Global Village trip. Each year he scribed on his bucket the location and date of the trip. He brought in this memento for me to see it. It really is a great testament to a lifetime of service. Even now as he’s done physically volunteering, he still brought the group together there at lunch time and they all shared their old volunteering stories with renewed energy.

It was lovely to be a part of their day—until the very end. Crew leader Mike Frisch and I stayed until the last possible minute trying to finish the last bit of laminate in a closet. I was impressed by his diligence. When the last of the flooring in the closet got set in correctly at the very end of the day, I remembered the feeling I got every day last year working out on site: accomplishment. No wonder our regular crews keep coming back.  The JCRC regular crew is a group of friends who came together to spend some quality time with each other doing something fun and important. I hope to be able to join them out on site again.