Jordan Week of Kindness: the place to be 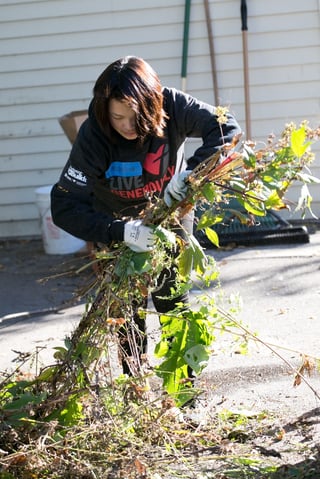 From July 9th-16th Twin Cities Habitat and Thrivent Financial, in collaboration with the Jordan Area Community Council (JACC), Jordan residents, and other community members, will be hosting the Jordan Week of Kindness. In the Jordan neighborhood of North Minneapolis, volunteers will be working alongside residents to improve their neighborhood by repairing five houses, cleaning-up the block, and planting flowers along the boulevard.

Homeowners like Brenda couldn't be more excited. "I feel so blessed that people are going to help me make my house look like a home again," she says. Volunteers will be fixing Brenda's porch, removing dead trees from her yard, and washing and painting her stucco. "I didn't have the finances to do it all myself. I'd start one project and then another one would come up. I'm so thankful and I couldn't be more grateful."

Additionally, a community celebration will take place in the afternoon on Saturday July 16th, with performances from local artists and dance groups, food, and fun community activities. In the words of Cathy Spann, Executive Director of JACC, “Join the party! This is the place to be on July 16th."

During the recession, residents of the Jordan neighborhood faced high rates of foreclosure and when a tornado touched down in North Minneapolis in 2011, the neighborhood was further devastated. In partnership with the JACC, Twin Cities Habitat chose an eight-block section of Jordan as a focus of its Neighborhood Revitalization effort. Launched in 2011, Neighborhood Revitalization works alongside Habitat’s traditional program and services that Habitat is typically known for. This initiative involves partnerships and engagement with neighbors, residents, and community organizations and associations to bring about positive change that goes beyond individual houses to improve overall quality of life in neighborhoods.

To evaluate the impact of the initiative in the Jordan area, Habitat and JACC conducted surveys comparing neighborhood conditions and residents’ perceptions in 2012 to those in 2015. Initial findings revealed the residents’ commitment to the area and their neighbors and progress due to the collaborative efforts. In 2015, almost 80% of residents reported being satisfied with their neighborhood, safety concerns decreased by 20%, and residents reported their neighbors and homes as the features they liked most about their neighborhood. However, exterior paint and landscaping remains the most common feature identified as needing repair, presence of litter and speeding was also noted as a concerns.

This event is an incredible opportunity to build upon collaborative effort as well as respond to resident feedback by providing repair work support to some homes that need a little bit of TLC. We would like to invite volunteers of all ages on Saturday, July 16th at 9AM to help out with the block clean-up and boulevard planting. Stay for the community celebration that is to follow from 1-4PM, echoing in with the rest in how great of a place the Jordan neighborhood really is!