Minnesota’s 2018 legislative session ended on Sunday, May 20, with a flurry of activity in the hours before the constitutional deadline. With only hours to spare, legislators passed a bonding bill for infrastructure investments statewide ─ including major wins for affordable housing!

Housing heroes in front of the Capital at Habitat on the Hill 2018!

With our champion lawmakers and advocates across Minnesota, Homes for All secured $120 M in bonding for housing in the bonding bill.  This is a historic level of support! Here is how the funds will be allocated:

Join us in thanking legislators for these investments in our housing infrastructure!

Governor Dayton has vetoed two of the three major bills passed at the end of session: a Tax Conformity bill and a Supplemental Budget Bill. He indicated in his press conference on Wednesday, May 23 that he will likely decide by this Friday May 25 whether to sign or veto the bonding bill, but he has until June 3 to do so. Since the Governor has been largely supportive of the bonding bill, advocates are cautiously optimistic that he will sign it into law.

In 2018, Twin Cities Habitat also advocated for the Workforce Homeownership Minnesota (WHOM) bill, which sought to generate $10 million per year for affordable homeownership development statewide. Despite strong bipartisan support from our bill authors and Homes for All partners, funding for WHOM was not included in the final tax bill, which was largely focused on conforming to new Federal Tax bill changes. News today of the Governor’s veto of the final tax bill enables us to shift our focus to next year. While disappointing, our work on the WHOM bill helped us build new relationships inside and outside of the Capitol that will be crucial in future years.

Twin Cities Habitat was also supportive this Session of the Minnesota Asset Building Coalition (MABC), which prioritizes racial equity and inclusion efforts at the Capitol. MABC worked successfully to embed a bill to end driver’s license suspension for unpaid traffic tickets within the final Supplemental Budget Bill. The Governor’s veto of that bill, however, shifts our attention to continued efforts next year. MABC was also successful in preventing cuts to the Emerging Entrepreneur Loan Program and Capacity Building Grants that the Coalition worked to create in 2016. 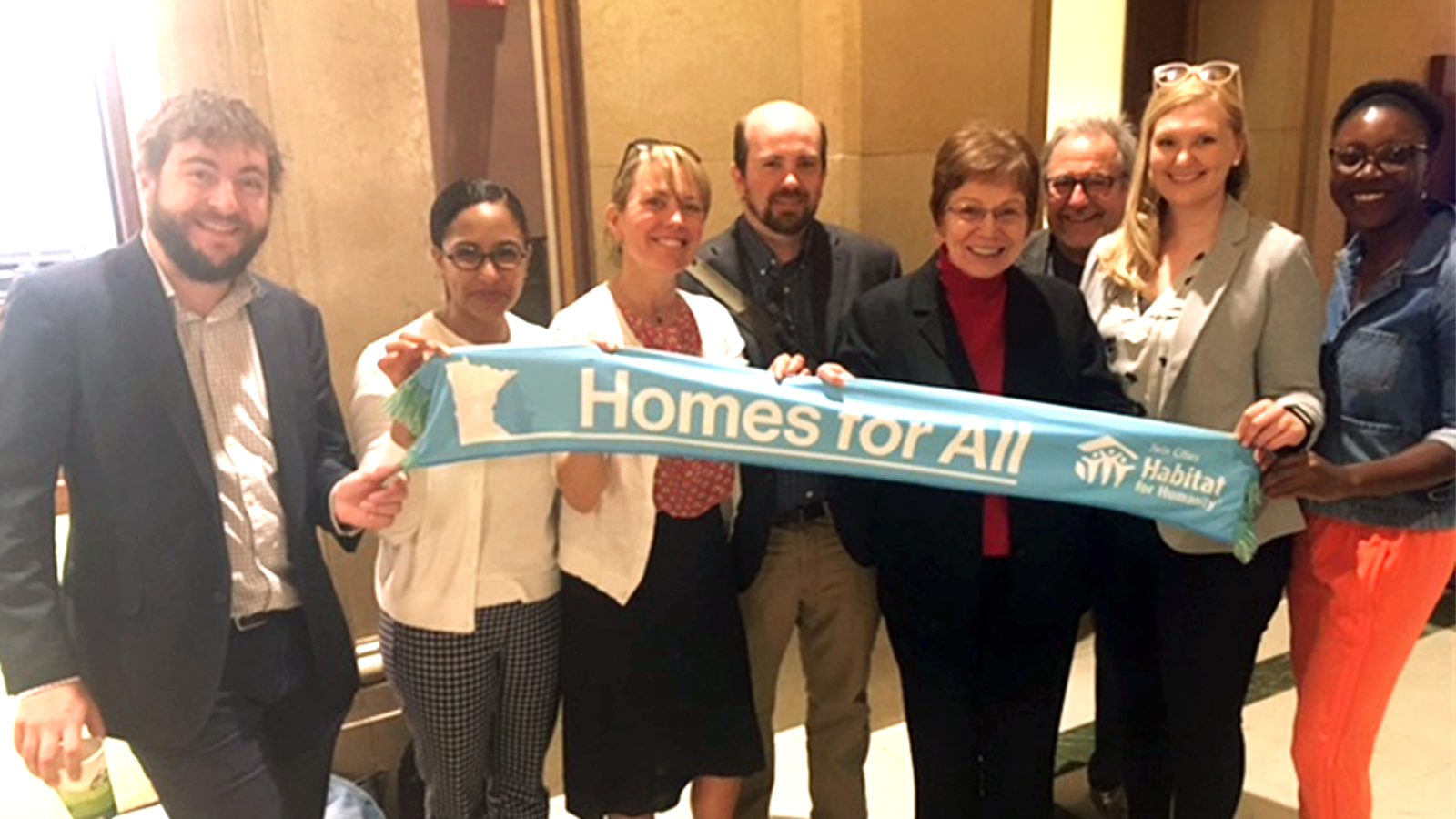 Homes for All members celebrate with housing champion Representative Alice Hausman after the passage of the bonding bill.

Twin Cities Habitat, Homes for All, and the Minnesota Asset Building Coalition would not be successful without the dedication and support of advocates like you! From attending Habitat on the Hill, contacting lawmakers, and raising awareness in your communities, your advocacy makes a difference. Thank you for all that you do to support affordable housing in our communities-thousands of Minnesotans will have access to safe, stable, and affordable housing because of the work we’ve done together.