Thousands of Minnesotans would benefit from Homes for All bill

A broad, statewide coalition known as Homes for All is calling on lawmakers to approve $130 million in bonding for housing-related developments during the 2016 legislative session. Minnesota’s low-income seniors, low-wage workers, and people facing homelessness are among those who would benefit most from these investments.

Homes for All is a growing coalition of private developers, nonprofits, faith communities, labor unions, and local and regional government agencies. The coalition advocates for investing in housing throughout Minnesota.

The coalition’s membership has grown in recent years as the need for affordable housing solutions hits more Minnesota communities. Meanwhile, communicating housing’s return on investment has led to significant bonding victories at the Capitol.

Chief authors for this year’s Homes for All bill are Representative Alice Hausman (DFL – St. Paul) and Senator David Tomassoni (DFL – Chisholm). Senator Dave Senjem (R – Rochester) has signed on as a coauthor.

“Studies have proven – and we know from experience – that access to stable housing is a key factor in a successful life," said Rep. Hausman. “I'm looking forward to continuing the effort this session.”

“Stable, affordable housing is linked to greater success in school, better health outcomes, and reduced spending on criminal justice,” said Senator Tomassoni. “Construction and preservation of housing creates jobs and helps businesses attract workers. This is vital to the long-term health of our state.”

Homes for All members are meeting with legislators from both parties across the state to recruit more coauthors and supporters.

“We know transportation, jobs and taxes are going to be big topics during this shortened session,” says Darielle Dannen, Public Policy Director at Metropolitan Consortium of Community Developers and Co-Chair of Homes for All. “But it’s equally important that we invest in housing because everything starts at home. And we know these are the kinds of investments that help unlock the potential in people.” 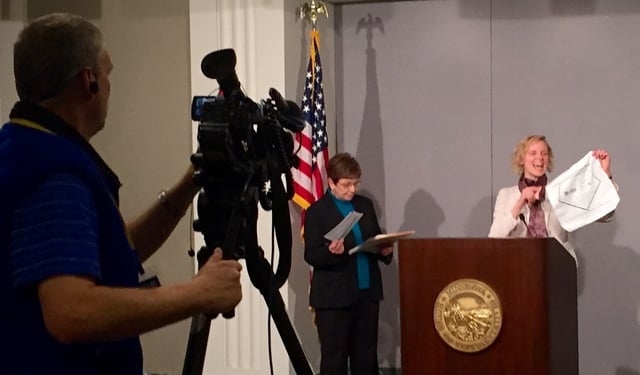 Darielle showed off the Housing Heroes new HOMEr Hanky during the news conference announcing this year's bill (hopefully it gets spotted a lot during the session).

The 2016 bill includes $110 million in Housing Infrastructure bonds and $20 million in General Obligation bonds. Approved funds for investment will be assigned to projects through the state’s request for proposal process. Demand for dollars is likely to far exceed supply, since developers requested three times the amount of money available in 2014.

Governor Mark Dayton has included $90 million for housing in his bonding proposal.

Plus, for the first time, funds will be dedicated to creating more affordable housing for Minnesotans over the age of 55 who are living in poverty. This is a growing population in Minnesota, where a third of seniors already spend more than they can afford on housing.

Housing advocates will be working to line up legislative support for the Homes for All bill during the annual Homeless Day on the Hill on March 15.

Twin Cities Habitat's Housing Hero advocates will also be reaching out to lawmakers during their Habitat OFF the Hill event. It will be at Twin Cities Habitat's St. Paul offices at 1954 University Avenue West on Wednesday, April 27. The event is free but you must register here.