"Yaa Mana Ofii" -- Home is Everything for Habitat Homebuyers 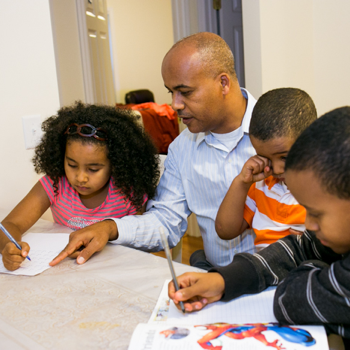 “Yaa mana ofii.” This Oromo language phrase is very common in Ethiopia. It means, “home is everything.” Yemane and Bizunesh, who bought their new Habitat home in West St. Paul in July, say the phrase comes from living desperate lives in Ethiopia. "It means home is where hunger and pain reside. But it also means home is where joy and love live.” Yemane says, “Everything in your life is sheltered by home. It can mask your need, but it also protects everything you have, especially your family.”

For Yemane and Bizunesh the phrase speaks about their children and the future they want for them. “We came to Minnesota from Ethiopia in 2012,” Yemane says. “There was no future for our children in Ethiopia.” He points to their oldest daughter, Miracle. “There were problems during Miracle’s birth that caused her to have cerebral palsy, a seizure disorder, and developmental problems. She requires full-time care, which means Bizunesh cannot work outside the home. In Ethiopia, it 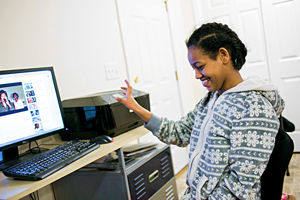 was very hard for her. There was no help and no hope for her there. Here she has a home that is safe for her and a future that holds possibilities.” Miracle joyfully listens to the sound of Christian Ethiopian rock music and occasionally tries to sing along.

“I taught high school history in Ethiopia," Yemane says. "It was hard because we didn’t have enough books or materials. I earned my Master’s in History on a scholarship to study at university in Ireland. When I went back to Ethiopia, I ended up working in the regional office of education trying to improve things, but nothing got better. That’s when Bizunesh and I decided we wanted to bring our children to the United States. We wanted them to be safe and have a stable home so we could make sure they had a good education.”

“We came here with the Diversity Visa Program,” Yemane says. “The year we applied over 20 million people applied for visas with the program, but they only give out 50,000 visas each year. That’s worldwide! We were lucky, we got visas. People would stand in lines for hours, day after day, and not get a visa. When we got them with the program, it felt like we’d won the lottery. We were very excited because it meant our children would be able to go to good schools and do more with their lives.” 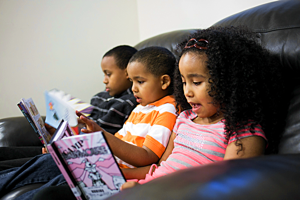 Gemachis, their 12-year-old son chimes in, “Our school is only one block away!”

Yemane smiles, “He loves sports. He’s a runner, and he likes soccer. It’s very good that the school is so close.”

He points to his 7-year-old daughter, “Kenaket loves math and reading and basketball.”

He nods towards the youngest in the family, 5-year-old Amanuel. “He is not in school yet, but he is so smart. He amazes me with how fast he learns new things.”

“I wanted to teach history here,” Yemane says, “I especially love teaching about the American revolution because it is such a good example for the world. But it was very expensive to get the extra schooling I needed for a license here. Now I am Human Resources manager for a small transportation company.” 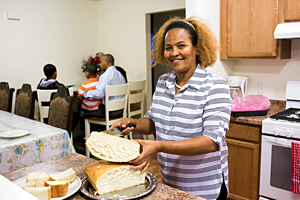 The family prays standing around the dining table before Bizunesh serves a huge loaf of home-baked bread called budeena, made from a hardy super grain called teff. She also serves a spiced rice and meat dish then invites our photographer and I to join the family. The kids demonstrate a traditional way to use the bread in their fingers to pickup and eat the rice and meat. We follow their lead and eat with our fingers. We also taste a traditional Ethiopian drink made with barley and honey. It is dark, non-alcoholic mead that is both sweet and bitter, almost like a cold coffee with honey stirred in.

Over the meal, Yemane continues their story. “When we first came to this country none of our children spoke English,” he says. “Even in Ethiopia I wanted our children to speak English to help them with the future, but they didn’t learn any until they came to Minnesota. They all love to play, but it was hard for them to make friends until they learned English. That motivated them to learn fast and now they have lots of friends. Our neighbors all know them and watch for them, too. It’s good and makes this neighborhood safer for our children."

"We lived in a duplex in Minneapolis,” he continues. “There were a lot of people that made Bizunesh and I uncomfortable there and the streets were very busy. Our children couldn’t play outside because it was too dangerous. Here, the neighborhood is quiet and safe and there is very little traffic. Here we don’t have to worry so much when they go out to play.”

He adds, "Also, in Minneapolis we had a neighbor downstairs, so our kids had to be very quiet and couldn’t run around and play in the house. In our new home, our kids have the freedom to be noisy and play without worrying about disturbing anybody.” 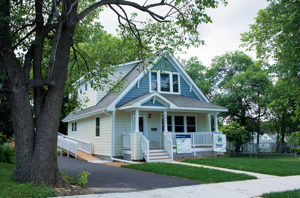 Yemane’s and Bizunesh’s pride in their new home is obvious. “When Bizunesh and I came the first day to build our home we didn’t know anything about building,” he says. “We thought the only thing we would be able to do was bring things to people, but Katie, the site supervisor, changed that.” He grins. “She told us both grab hammers and follow her.” He mimes holding a hammer. “By the time our home was finished, we knew how to put up drywall, install siding and flooring, and how to paint. We can do everything now!”

“We had good examples in all the volunteers who helped build our home," he says. "If we didn’t know something, they would show us. But what amazed us most is how much the volunteers cared! They had fun and enjoyed themselves, but they really wanted to make sure that the work was done right. They were sent by God.” Yemane added that Habitat volunteers also worked to build homes in Ethiopia.

Thankfulness to God is a common theme for Yemane and Bizunesh. The family are Lutherans and attend an Ethiopian Oromo church. They count their new home, all the volunteers, and Habitat for Humanity, as blessings sent by God. “With all these blessings, the future for our children will be much better. We can’t thank everybody enough, especially Habitat for Humanity. Their work is based on God and God calls people to respond. Habitat and all the volunteers answer His call."

If you want to be a blessing for other families like Yemane’s and Bizunesh’s, you’re invited to learn more about volunteering. You’re also invited to help us build more homes for low-income families to buy with affordable mortgages by making a donation today.