As the snow flew on a Wednesday at the end of January, Twin Cities Habitat staff and AmeriCorps members came together for our annual All Staff Build Day. Habitat staff often help out here and there on various Habitat projects and events throughout the year, but we take one day a year to join forces as an entire organization. And, like most Habitat volunteers, we had some fun and made some memories in the process.

The original plan was to put everyone at Heritage Park, a new five-plex project in North Minneapolis. But an overwhelming staff response allowed us to add four more northside homes into the mix, so we divvied them up and went to work.

There was plenty of work to be done for the 22 staff assigned to help out at our two Habitat homes next-door to each other on Oliver Street: an attic was filled with insulation, walls were framed in a basement, windows were trimmed, doors were hung, and a lot of building supplies and materials were reorganized. Elsewhere, staff were busy with everything from painting to flooring to installing sheetrock. 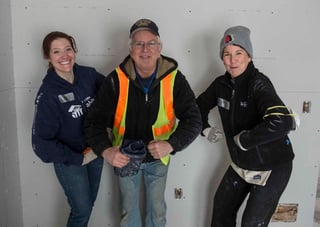 Cathy Lawrence, Vice President of Resource Development and Community Engagement, said while taking a break from hauling drywall: “I love the fact that, one: we get to get out of the office and do something we don’t do daily, and two: it feels very supportive of the field staff.” Cathy gets to site often with donors, but loves the chance to build relationships with colleagues at the All Staff Build Day.

For some of our newer staff members, this was their first time on site. The experience was eye-opening for Cindy Vahle, Intake Associate, who joined the Habitat team about eight weeks ago. In her role, she leads families through Habitat’s orientation and helps determine if they’re ready for homeownership. She sees the beginning of a homebuyer family’s journey, and today she saw what it's like to be in the midst of sweat equity.

“It puts a new perspective on building a home,” Cindy said. “An eight-hour day on site is hard, but families put in several hundred hours of sweat equity. They really put their blood into this home that they are working hard to own.”

While Cindy was feeding the insulation machine with bag after bag of recycled newspaper, Jessa Anderson-Reitz was next door working on window jambs and trim.

“It’s really fun to get out of the office,” Jessa said. “It helps me to see the mission in action, and to work with new people.” Jessa works on the Homeownership Development team with Cindy as a Financial Coach & Referral Administrator, and the All Staff Build allowed her to reconnect with the team members she had worked closely with in her previous position as Faith Relations Assistant.

At the end of the day, Tony Beckstrom, the Site Supervisor for one of the two homes on Oliver Street, surveyed the results. “It’s nice to get you guys on my turf,” he said about the office staff. “We’re here to have fun and help people out. And we did a good job.” Tony would know—he’s been working with Habitat for 26 years!

Tony explained that volunteer numbers drop dramatically in the winter season, even though we’re building year-round. He said the big turnout from the annual All Staff Build Day in the middle of winter gives a much-needed boost to the current builds.

Our staff learned that there’s a wide variety of tasks which can be completed in the warmth of a home, even if it's snowing outside. If you’d like to volunteer this winter, check out our opportunities for individuals and groups!