Beloved Office Volunteer Going Above and Beyond

For the past decade, Dave Kaliher, an Air Force veteran, has been volunteering regularly in the Twin Cities Habitat for Humanity office building. 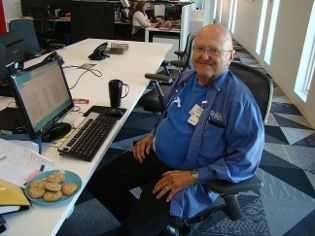 He first began volunteering with Habitat 20 years ago, helping with the construction at build sites in Brooklyn Center. At the time, he was a software engineer.

After he retired, his neighbors told him about an upcoming orientation for individuals interested in becoming regular crew members at Habitat. Having enjoyed his previous volunteering experiences and believing in Habitat for Humanity's mission to provide decent, stable housing, he decided to check it out.

During the orientation there was a mention of volunteer opportunities in the office and he wanted to learn more about this type of volunteer work.

"An office position would be easier on my knees," he joked.

Comfortable with spreadsheets and databases, his early tasks involved entering in donation information and volunteer waivers.

Over the years Dave has been involved in a variety of projects. "It's all been kind of fun," he said. However, one that was particularly memorable for him was a photo project that was done as part of Habitat's move from its old office building to the current one.

Twin Cities Habitat for Humanity has been around since 1985 and before digital photography all the photos that were taken were printed and stored in hard copy. This resulted in accumulating "boxes and boxes" of them. So in 2014, when Habitat moved to a new office building, Dave scanned the old photos so a copy could be kept online.

"We had to figure out what to do with the hard copies once this was done." said Construction Support Assistant Terry Barnes.

Dave would pick out some of the photographs and send them to the Habitat families in them. He liked sending the photos, taken during the construction of homes and when the families moved in, and looked at them as a part of a family's history.

"A lot of children in the photographs are 10 or 15 years older now. They have become adults." 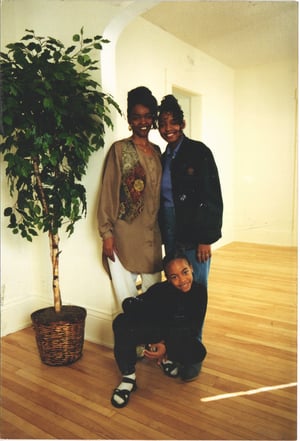 His current tasks involve recording volunteer numbers and creating weekly volunteer reports for builds that are sponsored by Thrivent, one of the biggest sponsors of Twin Cities Habitat for Humanity.

"This summer Dave has been impossibly helpful keeping me up-to-date with a lot of very important data entry," said Faith Relations Assistant Anne Meyers-Welsch. "This year the amount of data entry we’ve had to do for a particular project doubled and Dave has stayed even longer into the afternoon putting in many, many hours to help us get through the summer and make it more likely we’ll secure our funding for next year."

"I’ve really enjoyed working with him this summer and I’m incredibly grateful for how detail-oriented and dedicated he is," Anne said.

Terry agrees, "Dave is one of those people behind the scenes that is just always working to help get things done."

Dave's thoughtfulness and work ethic are always appreciated around the office and his special skill set has been a tremendous asset to the office. If you would like to share your particular talents or expertise check out all the way retired volunteers can help us out!