Ameriprise Financial and A Brush with Kindness Form Lasting Bond

Rich is a U.S. Army veteran who has served multiple tours in Bosnia and Afghanistan.

“Holding on to this house has been a twelve-year battle,” he says.

Rich bought his home in 2002, when the housing boom was near its peak.  He knew the South Minneapolis home was an investment that would keep him busy for years to come, but he couldn’t have foreseen the turn the housing market would take just a few years later. The market shift, paired with a year-long deployment in Afghanistan from 2011-2012, left Rich with the stress of an underwater mortgage and a mounting list of repairs that he simply can’t perform alone.

“The repairs on my house just snowballed and got out of control,” Rich said.

Sections of the home’s exterior had to be redone and the siding’s lead-paint had to be carefully scraped off and repainted. Additionally, rotted wood in the front entry had to be removed and replaced, along with a section of the home’s roof that had a concave slope, which caused it to collect water that threatened to leak into the house.

In short, the home needed a lot of work. Fortunately, Rich had plenty of people eager to help. 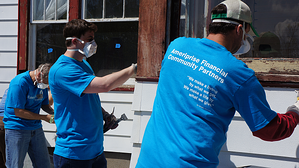 A Brush with Kindness volunteers – including nearly sixty from Ameriprise Financial -- took on the task of helping get the house back in shape. Over a four-day span, the volunteers worked right alongside Rich.

“At first I was a little nervous about getting help, but everyone here has made me feel at ease,” Rich said.

The leader of those Ameriprise volunteers, Phil Face, has a lot of experience working with homeowners. As a Financial Planner with Ameriprise, Phil has had the opportunity to lead volunteer home building trips to Mexico, which requires a five-day commitment from group members. After receiving inquiries from a number of his coworkers, Phil came up with an idea to create a project with a shorter time frame. 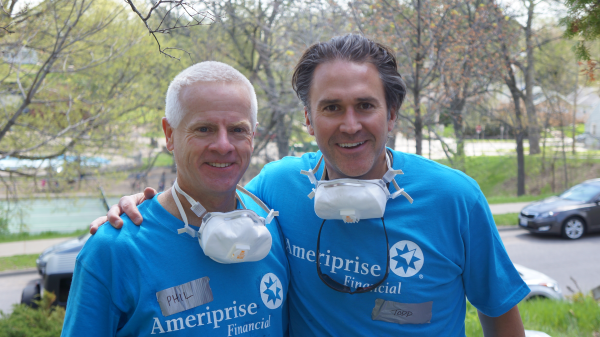 Phil and his co-worker, Todd, take a break to pose for a picture.

“Folks back home often said ‘I’d like to help, but I can’t take the five days this trip entails’,” Phil mentioned. “I [had] heard about the A Brush With Kindness program at Twin Cities Habitat, and it sounded like a perfect fit.”

After presenting his idea to a number of colleagues, Phil received an overwhelming response. Nearly sixty co-workers from Ameriprise wanted to volunteer their time! Of course, feeding such a large crew is a challenge itself.

A few weeks earlier, Phil called Chris & Rob’s, to cater the project with their authentic Chicago-style food. Co-founder, Rob Dubnecay, said not only was he happy to cater the event, but he said they would cater lunch all four days of the project – and he insisted on doing it for free. For Rob, it was an easy decision.

“I’ve gotten a lot of help in my life. When a cause like Habitat for Humanity comes along and you have the opportunity to help, you have to do it,” Rob said.

For the Ameriprise volunteers, the experience was a huge success and a lot of fun. 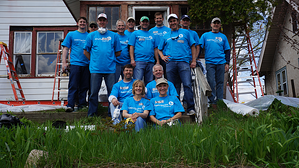 “The enthusiasm has been great. We have almost sixty volunteers for the four-day project. I believe we’ve also raised over $3,000,” Phil added.

Rich enjoyed having them around, as well.

“Being a student and veteran can be kind of isolating.  It was nice to just share some time with some nice people who were willing to take time out of their schedules to help me - including time from their families for the Saturday group,” Rich said.