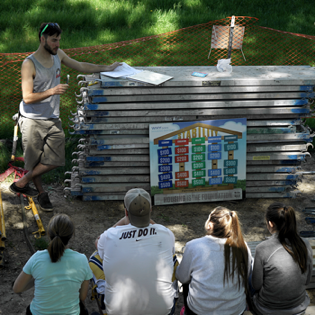 Greg Rouse, an AmeriCorps Member working with Twin Cities Habitat for Humanity on a build site in Fridley, recently played a game called Housing is the Foundation during a lunch with a group of high school seniors who were volunteering on the site. The game is one of the tools developed by Habitat’s Build. Think. Act. program to facilitate conversations and actions on housing by homebuilding and ABWK (A Brush With Kindness) project volunteers. Judging by how engaged the students were, and the answers they gave, it was clear the game helped them to understand that for low-income families, housing is no game.

Rouse used a game board with five different categories topping a column of dollar values, similar to the TV game show Jeopardy. The categories were Economy, Education, Health, Transportation, and Environment. The students picked a category and a value, then had to answer the question to win points for their team.

One Education question was, “In a Minneapolis survey of families who moved three or more times in one school year, what percent of their moves were unwanted?” When the students heard the answer was 80%, it caused a stir. The students had all grown up in stable housing. None said they had moved more than once or twice in their lifetimes and all who had moved said the reasons for moving were to get a bigger house, a job transfer for one of their parents, or, in one case, a divorce. They had difficulty comprehending what it would be like to have to move three or more times in one school year. 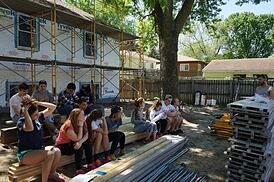 Under Economy, students were asked if this statement was True or False: “Affordable housing lowers property values on nearby properties.” They were surprised to learn the statement was false and they pressed Rouse for an explanation. Rouse explained that countless studies have demonstrated that affordable housing either has no impact on property values, or it causes an increase in neighboring values. He gave an example of one study of 12 Twin Cities neighborhoods with tax-credit affordable rental developments that found that neighboring properties performed the same or stronger in comparison to similar neighborhoods.

All the students playing the game were seniors heading off to college in the fall. They were genuinely surprised to learn that having a safe, stable and affordable home could have such a profound impact on a family in the area of education. Realizations like these are exactly what the Build. Think. Act. program is designed to deliver. It takes the Habitat experience as a construction volunteer to a much deeper level.

The students had fun helping build a house, but the housing game they played moved them to think beyond the day, hopefully motivating them to do more to help address the affordable housing crisis. If you’d like to become part of the solution, Twin Cities Habitat has lots of volunteer opportunities. We invite you to also consider making a donation, however small, to support our mission. For every hour someone volunteers building materials have to be paid for, tools and equipment have to be supplied, and supervisors have to be hired. Making all that happen means we need financial support as well as volunteer support.