Twin Cities Habitat for Humanity is yet again joining forces with over 25 local organizations to advocate for stable and affordable homes for all in Minneapolis! Act now to show your support! 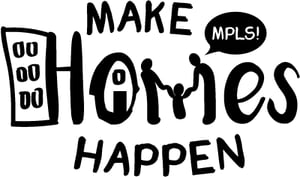 The Mayor of Minneapolis, Betsy Hodges, recently released her proposed budget for the city. Over the next few weeks, City Council Members will make changes before they vote on the final budget in January. “The City of Minneapolis has a great need for affordable housing,” explains Rebecca Lucero, Policy Manager, at Twin Cities Habitat for Humanity. “Your Council Member needs to hear that you support $20 million for affordable housing in Minneapolis!”

The high-end housing boom of the past few years has caused an increase in the cost of housing, pricing people out of their current homes and affecting both homeowners and renters. Over 60,000 Minneapolis residents pay more than they can afford towards housing, and even with the increase in state minimum wage to $9.00 an hour, an earner would have to work a staggering 85 hours a week in order to afford average rent in Hennepin County ($996 for a modest two-bedroom apartment). 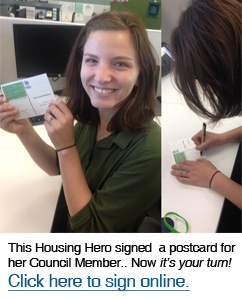 The budget does not include any additional funds for homeownership. “It’s essential to contact your City Council Member and ask them to support resources that counter some disturbing trends in housing,” says Lucero. “Minnesota has one of the largest racial homeownership gaps in the country. In Minneapolis, the homeownership rate for white households is around 59 percent, compared to 23 percent for households of color. Investing in ownership housing brings stability to families and equity to our communities.”

The Mayor’s budget also includes only half of the funding requested for homebuyer education and foreclosure prevention. “Supporting homeownership education is important because it empowers buyers to make informed borrowing decisions for long-term success,” says Lucero. “It’s also is a cost-saving mechanism for the city.” The average cost of mortgage foreclosure prevention counseling is less than $500 per household, while the average costs to a community to recover from just one foreclosure is around $78,000!

Over the next few weeks, City Council Members will consider the Mayor’s budget—we need to ensure they include $20 million for affordable housing in the finalized budget. TC Habitat is kicking off our $20 million campaign by collecting postcards and sending them to the Minneapolis Council Members. Please sign the virtual postcard today to show your support for $20 Million!

You can also get involved by contacting your Council Member by phone or email and expressing your support for a $20 million investment in affordable housing in the Minneapolis city budget. (After you contact your representative, make sure you let our Advocacy team know! We’re keeping track.) Together we can #MakeHomesHappenMPLS!

Cassie Paulsen is the Advocacy Associate at Twin Cities Habitat for Humanity, completing a year of service with Lutheran Volunteer Corps. She’s “Minnesota-grown,” and thus has a healthy love for camping in the BWCA, the extremes of all four seasons, and tatertot hotdish. She attended St. Olaf College, where she studied Political Science and Education.