When Russ retired from U.S. Bank after serving in the IT Department for 20 years, he knew he wanted to do two things:

Russ was already familiar with Habitat for Humanity through his work at U.S. Bank, and the idea that his two main post-retirement goals could correlate and inform one another so well was appealing to him.

Once Russ purchased his first home in St. Paul, he set out to tackle the second item on his list: do volunteer work. He saw an ad in his local paper that featured a Project Management volunteer role with Twin Cities Habitat for Humanity, and he pursued the opportunity. Shortly after reaching out, Russ was working alongside Brent, a Senior Project Manager at Habitat, helping to do data entry. After a while, Russ realized he could use his skill set from his previous job to streamline the process, and ended up building a database for the Project Management team to use.

“Russ was very detail-oriented and willing to do whatever was needed,” Brent said. “He was always a pleasure to be around and did an incredible job building a user-friendly database for us to compare job costs.”

After working with the Project Management team for a while, Russ realized he also had interest in the homebuilding aspect of Habitat’s work. 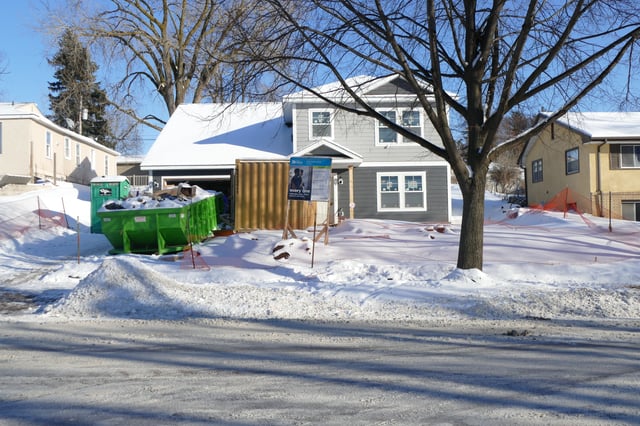 “I knew I still wanted to get out in the field, and Habitat provided plenty of opportunities for me to lend a hand,” Russ said.

He began working with Site Supervisor Melissa and AmeriCorps member Andrew once a week to learn about all the phases of homebuilding. Prior to his first day on-site, Russ made a special trip to pick up work gear and clothes. 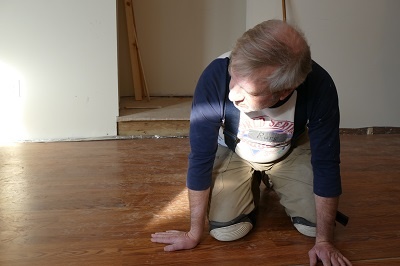 On his first day in the field, Russ showed up a little early for his volunteer shift, and was surprised to hear the noise of hammers and power tools already at work. As he approached the area where the noises were coming from, he came upon a big group of guys, already in full swing of framing the home.

“It was incredibly intimidating for someone with no construction experience,” Russ recalled. “I seriously thought about turning around and going home!”

Russ decided to stay, and later learned that he had stumbled upon the very experienced 3M framing crew: a group of regular volunteers who specialize in framing Habitat homes and have been working together for numerous years.

“Now I know that crews have all different experience levels,” Russ said. “I really like working alongside the regular crews, because the people you work with are all really kind and helpful. They’re aware of everyone’s skill levels and respectful and always willing to teach me new skills.”

The skills Russ has learned while building Habitat for Humanity homes not only translate over to repairs and work on his own home, but they also translate into his side hobby of woodworking. The commonalities between the tools he uses and the measuring skills he practices on a regular basis help Russ get comfortable when it comes time to use a new tool on site or try a new cut or design in his woodworking craft. 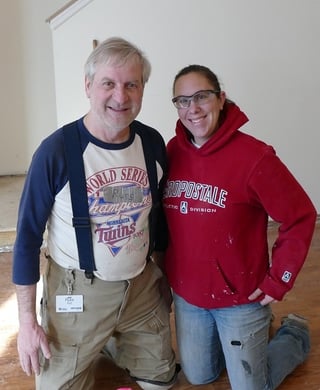 “Russ is literally willing to do and learn anything,” said Melissa. “It’s fun for me to teach him things that he can use in his personal life. In a way, it makes my work even more meaningful.”

Russ has become a regular, reliable volunteer, making him an invaluable asset to Melissa and Andrew, especially during the winter months where volunteer numbers tend to be lower. Russ admitted that he avoided starting his volunteer work last January, because he thought he would be out framing a house in freezing cold weather. After working on a few homes, he quickly learned that wasn’t the case.

“Volunteering once a week, I get to see all of the phases of construction—but somehow I still miss stuff,” Russ said. “During the winter months, there’s a lot of work to be done inside the home—and it’s plenty warm inside with heat. I also keep warm because I’m constantly moving around. I’m not really one to just sit and do nothing.”

Although Russ volunteers with organizations outside of Habitat for Humanity, he says that the skills and relationships he has formed through his work with Habitat have been extremely rewarding—although talking with Melissa, it’s tough to tell who feels like they get the better end of the deal:

“He knows where things are, he’s willing to learn, and he’s incredibly reliable,” Melissa said. “Add to that his good heart and amazing personality, and it adds up to one of the best build months I’ve had in my career.”

Learn more about volunteer opportunities with Twin Cities Habitat and sign up to lend a hand today!