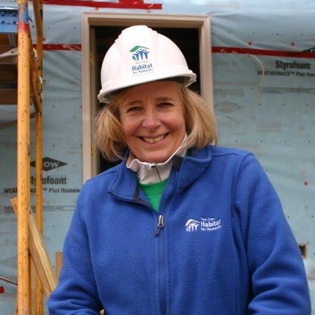 As President of Twin Cities Habitat, Susan Haigh’s job is to work to “Eliminate poverty housing from the Twin Cities and to make decent, affordable shelter for all people a matter of conscience.” That’s the mission of the organization, but it’s more than that for Susan.  Talk to her for only a short time and you’ll understand it's link to her deep desire to lift families and to give them a chance to build better futures. It’s not just a job for her; it’s a journey of the heart that started 40 years ago.

Susan’s first job as a lawyer was with the Metropolitan Council. Her responsibilities included land use planning and advising the Council’s Housing and Redevelopment Authority. The work taught her about issues surrounding affordable housing in the Twin Cities, and moved her to make it one of the main focuses of her career. Since then the federal government has deemphasized its involvement in affordable housing, transferring the challenge and burden to the states. That didn't slow Susan down. (Later Susan would return to the Metropolitan Council to serve as its Chair. She recently left that position to focus on the Habitat mission again full time).

In 1995 Susan was elected as a Ramsey County Commissioner and quickly became immersed in issues of homelessness and affordable housing. It was during this time that she saw the growth of homelessness. She saw, “Far, far more working families, and people who actually had jobs…who could not afford rental housing.”

“In the 90s I spent a lot of time educating people about homelessness and the need for affordable housing,” she said. In the years since the recession we have seen, “a continued increase in the number of homeless children, and homeless families.” She points out that when people are homeless it makes it difficult to, “provide them services that would help them improve their lives.” Her concern about homeless families, and families unable to afford safe, secure, stable homes for their children, led her to Twin Cities Habitat in 2005.

“This is Twin Cities Habitat’s 30th Anniversary year and we have a lot to celebrate,” she said. “Since our founding Twin Cities Habitat has built homes in 57 cities in the 7 county metropolitan area.” She went on, “There is a need for affordable housing in every one of these cities and Habitat is the right partner to help cities address that.” These include new homes built in suburban areas, new redevelopment projects in the urban neighborhoods, and the rehabilitation of existing housing stock. “That’s good for our families,” she said. “It’s good for our neighborhoods and our communities.”

Susan is particularly proud of Habitat’s relationship with the business community. “One of the great miracles of Habitat here in the Twin Cities is the depth and breadth of the partners that we have,” Susan said. She talks about how businesses, big and small, support Habitat, and is quick to point out how virtually every single Fortune 500 Company with headquarters here supports Habitat. “They bring out volunteers and support the mission financially,” she said. “They don’t just do it once, they do it year after year because they know that the employees of those companies, when they come to volunteer, will have a really meaningful experience.”

Twin Cities Habitat for Humanity is currently going through a strategic planning process, the purpose of which is to look at how we can grow and serve more people. “For the past 10 years Habitat has been able to build 50 to 60 homes per year,” Susan said, “But I have 250 families who are qualified for homes and ready to move in, but we can’t build homes for them all.” Susan, and everyone who works for Twin Cities Habitat, would like to find a way to help every family that qualifies to actually buy a home. “Finding new partners and new ways to collaborate is one of the ways to move us toward that goal.”

“What’s good about the bonds,” Susan said, “is that it will leverage about seven dollars for every one dollar of state investment, and a lot of new affordable housing development will result from that investment.”  Susan is rightfully pleased with the progress, but knows there is much more work to do.

“Having a safe, stable place to live, that you can afford for your family, is a basic human need,” Susan pointed out. Susan has seen a lot of changes in the last 40 years, and she’s managed to get a lot accomplished, but she knows there is much more to be done. She’s pleased with the progress, but it’s a safe bet you’ll find her energy, and her passionate voice, at the forefront of the battle for many years to come.