Whether building one Habitat for Humanity home or trying to revitalize an entire neighborhood, the work goes better when more people help. This all-in-together approach is paying off right now in St. Paul’s Frogtown and Rondo neighborhoods, one area where Twin Cities Habitat for Humanity has focused efforts since the foreclosure crisis. In the past three years, working in just a small cluster of blocks, Habitat for Humanity volunteers have built or rehabbed 11 homes and repaired 11 existing homes through A Brush with Kindness. The positive impact is noticeable, and both hope and neighborhood pride are on the rise. There are far fewer vacant, boarded-up homes than there were at the height of the recession.

All this work is thanks to an outpouring of support from businesses with strong St. Paul ties, local churches, foundations, and residents passionate about seeing their neighborhood become a better place to live. On the corporate side, both Ecolab and PCL were primary sponsors on Habitat homes in St. Paul in 2014. Holy Hammers, a faith coalition that's contributed more than $1M to Twin Cities Habitat's work over the years sponsored a third home. And the Builders Circle, made up of individuals who donate more than $1,000 annually to Twin Cities Habitat, sponsored a fourth home in the neighborhood revitalization zone. 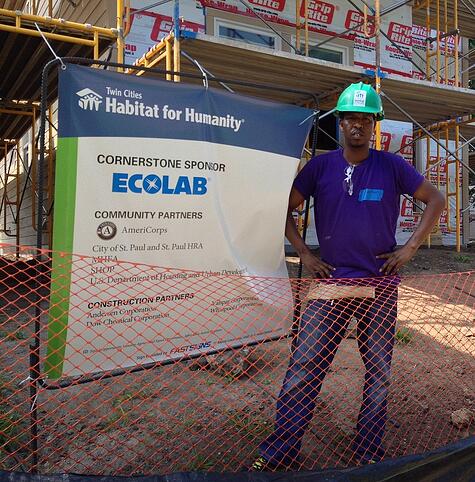 Jowhar (pictured above) is excited to be buying a Habitat for Humanity home in Frogtown. The location is perfect for him to either ride the train or his bike to his job in Downtown St. Paul. The green line train is just a block away. Jowhar and his wife have three kids and right now they're living in a crowded one-bedroom apartment in the Riverside neighborhood. They're excited that they'll have space and a yard where their kids can play. Jowhar built homes and made furniture in his native Ethiopia, so his sweat equity hours were extra valuable on site.

Advocacy creates homes
Twin Cities Habitat's advocacy work is also having a significant impact improving the neighborhoods of St. Paul. More than 100 decent, affordable rental units will be created or preserved in the Frogtown and Rondo neighborhood thanks in part to the lobbying that Twin Cities Habitat for Humanity’s green-shirted Housing Heroes did at the State Capitol during the 2014 session. They shared information on how important affordable housing is for communities. Lawmakers got the message and approve $100M in bonding for housing projects. Some of that money will be invested in projects like the BROWNstone building (pictured below) that will be going up along University Avenue in the coming year.

Even when Habitat for Humanity is focused on neighborhood revitalization, volunteers continue to be the lifeblood of the organization. More than 1,500 St. Paul residents volunteered on Habitat for Humanity projects in 2014. The picture below is of Erv (left) and Bill Barrett (right), brothers who've been volunteering with Twin Cities Habitat's St. Paul Regular Crew for decades. Erv estimates he's worked on about 200 Habitat homes over the years. Dedicated volunteers like these two, and all other members of Regular Crews around the metro, are critical to the work of Twin Cities Habitat. 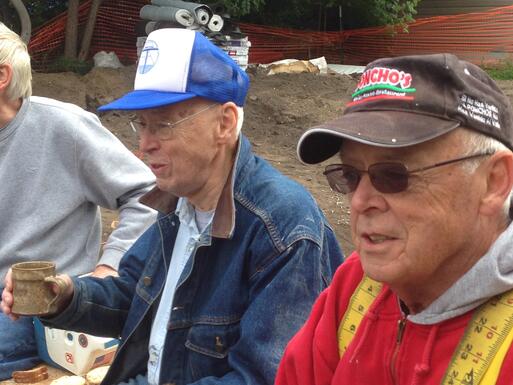 Revitalizing neighborhoods is a slow, continuous process. It doesn't happen over night. Twin Cities Habitat for Humanity is always seeking more partners to join in this work. If the long-term success of St. Paul is important to you, please contact us about being a part of this effort as either a volunteer, a financial donor, or an advocate.