Service and School Go Together for Habitat Student Volunteers 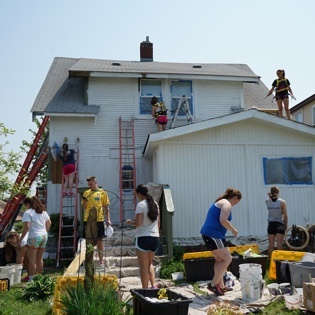 Breck School seniors spent two weeks in May on site with Twin Cities Habitat for Humanity. They spent one full week helping build a new home in Fridley, and a second week doing painting and repairs on an ABWK project in Minneapolis. For several of the group this was the second year in a row they’d spent their “May Program” volunteering with Habitat.

Community service is a regular part of education at Breck. From kindergarten on, Breck students spend time monthly or weekly (depending on age), doing service projects in the community. This service culminates during their junior and senior years when they spend the last two weeks of the school year either serving an internship, or volunteering with a nonprofit.

During the time this group of students spent building a home, they learned to hang windows and how to get a house ready for siding. They enjoyed learning the new skills, but all of them were really happy to have had a chance to meet and work alongside the new homeowner. Breck senior Michaela Neisen said working with Faud Omar and Senea Shato, made her feel like they were becoming a hands-on part of the home and family’s history. It meant a lot to her to be building a home for Faud and Senea's two children.

Every Breck student learns a second language, but they were surprised to learn that Faud and Senea both spoke five different languages - Oromo, English, Amharic, Somali, and Arabic. The languages were a clue to the difficult journey and transition Faud and Senea have made in leaving their home country and coming to Minnesota. 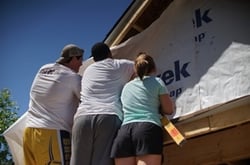 Karsten Salveson, another senior, said working on the house and alongside the family reminded him of just how fortunate he has been in his life. He said he wanted to work with Habitat because he wanted to make a difference, but hadn’t realized just how much of an impact the work would have on him. “You can see just how much you’re helping people,” he said. “I’ve learned that I really want to continue doing whatever I can to help anyone who is less fortunate than I am.”

Both Michaela and Karsten said the experience had brought them close to all of the other students, despite the fact that many of them barely knew each other prior to volunteering.

They had a major gear shift the next week when they went to North Minneapolis to paint the home of Gail Glirbas, a single mother with two special needs children. Gail said she really liked the energy of the students. “They’re all so up and so friendly it’s been fun working with them.” She quickly added, “Without Habitat and ABWK, and all these volunteers, I don’t know I would have ever been able to get this all done. I can’t do this work anymore and I asked a lot of organizations for help, but ABWK really stepped up. I can’t thank them enough.”

These students are literally going to colleges from coast-to-coast, but in the last days of their Senior year, they built skills, and memories that will keep them connected to each other, and to these two families, wherever they go.

In addition to the joy and energy the Breck students spread while spending two weeks volunteering with Habitat, many of their families also contributed financially to help defray the costs of building materials, tools, and staff on each of the sites. Without both the volunteer efforts, and the donations, it would be impossible to do the homebuilding that helps families realize the dream of homeownership, or the do the repair projects that make it possible for many more families to remain in the homes they’ve lived in so long. Thank you community-minded Breck students, and generous Breck parents!